A Poetic Primer for Love and Seduction: Naso was my Tutor 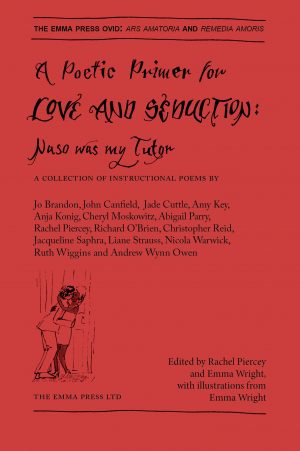 Forget the Game and give the Rules a miss: you have in your hands the only textbook you will ever need in matters of the boudoir, bedroom, and heart.

How to seduce. How to fall in love. How to execute the ‘arctic chandelier’ without causing yourself an injury. No aspect of your physical and emotional wellbeing is neglected in this dependable compendium of didactic poems, tailored to the needs of students of all abilities.

Fifteen poets provide encouragement and guidance to beginners and experts alike, channelling the spirit of the Roman poet Ovid’s Ars Amatoria (The Art of Lovemaking) and Remedia Amoris (The Cure for Love).

You can read a discussion of one of the poems, 52 Card Pickup’, over on Poem Club.

‘The best teachers were the ones who wove something of themselves into class, so that the lesson could only have been given by them.  And the most memorable poems in the Primer break down the big themes to an individual moment, a nuanced angle; they know something more.’ – Angelina Ayers, Sabotage Reviews

Jo Brandon was raised in Lincolnshire and is currently based in London. She works part-time for the Poetry Society and is former General Editor of Cadaverine magazine. Her pamphlet, Phobia, was published by Valley Press in 2012 and her writing has featured in publications including Poetry Review, Aesthetica, Dream Catcher and Cake. She can be found online at www.jobrandon.com

John Canfield grew up in Cornwall and now lives in London. His poems have appeared in magazines and anthologies including Oxford Poetry, Transom, Newspaper Taxis and Coin Opera II. He trained as an actor, but due to a clerical error currently works in an accounts department.

Jade Cuttle is currently reading French and Russian at Homerton College, Cambridge University. She won Foyle Young Poet of the Year awards in 2010 and 2012, and second place in the 2011 Ledbury Poetry Festival Competition. She was invited to read at Ledbury Festival, and has recently performed in Parliament.

Amy Key was born in Dover and grew up in Kent and the North East. She now lives and works in London. She co-edits the online journal Poems in Which. Her pamphlet Instead of Stars was published by tall-lighthouse press in 2009. Her debut collection Luxe was published by Salt in November 2013.

Cheryl Moskowitz is a US born, UK based poet, translator and novelist. Her poems have been published in literary journals including Poetry Review, Magma, Artemis and US magazines Drunken Boat and World Literature Today. Her books include a novel, Wyoming Trail (Granta), poems for children, Can it Be About Me (Frances Lincoln) and a poetry collection The Girl is Smiling (Circle Time Press).

Andrew Wynn Owen is reading for a BA in English at Magdalen College, Oxford. He is a former winner of the Foyle Young Poets of the Year Award (2008, 2009, 2010), the Ledbury Poetry Competition (2011), The Times Stephen Spender Prize for poetry translation (2011), and The Richard Selig Prize (2013). He is currently Secretary of the Oxford University Poetry Society. His first pamphlet, Raspberries for the Ferry, was published by the Emma Press in March 2014.

Abigail Parry worked as a toymaker for several years, and is now completing a PhD on play in contemporary poetry. Her work has appeared in Poetry London, The Rialto, Ambit and Magma, and also in various anthologies. She received an Eric Gregory Award in 2010.

Rachel Piercey was President of the Oxford University Poetry Society and won the Newdigate Prize in 2008. She is currently an editor at Cadaverine magazine and her illustrated pamphlet of love poems, The Flower and the Plough, was published by the Emma Press in January 2013.

Christopher Reid’s most recent book is Six Bad Poets. Among his earlier publications, A Scattering was declared Costa Book of the Year 2009, while The Song of Lunch became a BBC2 film starring Alan Rickman and Emma Thompson.

Jacqueline Saphra’s first pamphlet, Rock ’n’ Roll Mamma, was published by Flarestack and her first full collection, The Kitchen of Lovely Contraptions (flipped eye), was developed with funding from Arts Council England and nominated for The Aldeburgh First Collection Prize. An illustrated book of prose poems is forthcoming from The Emma Press in 2014.

Liane Strauss is the author of Leaving Eden (Salt Publishing, 2010) and Frankie, Alfredo, (Donut Press, 2009), a guest poet on the Clive James website and Head of Poetry, Creative Writing, at Birkbeck College. Her poems have appeared in numerous journals and anthologies in the UK and the US.

Nicola Warwick was born in Kent and currently lives in Suffolk, where she regularly attends a poetry café in Ipswich. She has had poems in magazines and anthologies and is currently working on her first collection while undertaking a mentoring scheme with Jan Fortune of  Cinnamon Press.

Ruth Wiggins lives in East London with her partner and three sons. Her work has appeared in UK magazines and anthologies, and has been commended in recent competitions. Her first pamphlet will be published later this year by the Emma Press. A book of her images of women dressed as super heroes (see here) was also published in 2008.

Sorry, the comment form is closed at this time.