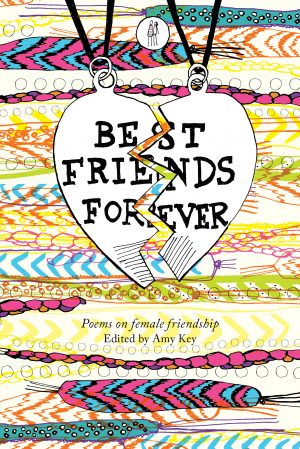 Female friendships can be intense, rewarding, devastating and enduring. The idea of the best friend defines the social and emotional lives of many young girls and continues to have an impact into adulthood, even as The One BFF relaxes into many close female friendships. Best Friends Forever is a celebration of the transformative power of this frequently overlooked and misunderstood relationship.

‘My best friendships are founded in acute empathy, of experience, eating habits, dressing, politics. The empathy is a magic force, and I like to think a little bit of me is nested in all the friends I’ve made, a live or latent connection that can be activated at any time. This access to empathy – the opportunity to love so variously and deeply, to be accepted and forgiven and inspired – is what makes my friendships with women so special to me.’ — Amy Key in her introduction to Best Friends Forever

You can read a blog about the book, called ‘Female Friendship is a Very Complex Thing’, here.

‘There’s a good mix of known and less known names, and just about everything is quotable.  Liz Berry and Kathryn Maris both have stand-out contributions, the former passionately longing, the latter witty and sophisticated. […] There’s refreshingly little irony but plenty of love, excitement, sadness or disillusionment for any reader to empathise with, not to mention all the nearly-shared experience.  As Amy Key says in her heartfelt introduction, the “magic force” of empathy is at the heart of the best friendships.’ — Fiona Moore for Sabotage Reviews

‘The anthology did not disappoint. Although there is certainly no shortage of clothes and make-up, here, there is also rock music and cars and violence and adventure. The poems got me thinking about my own friendships and how they have changed over the years, and they got me wondering why, as is pointed out in Jacqueline Saphra’s brilliant poem, ‘Catharsis’, it is so ‘hard [. . .] to make new friends once you reach / a certain age’. […] What Amy Key and The Emma Press have done is to shine a light on a vital and sustaining part of women’s lives, and an often undocumented one. This anthology would make a great gift to a good friend, but it is also a valuable aid in considering the importance of one’s own friendships, past and present.’ — Penelope Price for For Books’ Sake

Amy Key was born in Dover and grew up in Kent and the North East. She now lives and works in London. She co-edits the online journal Poems in Which. Her pamphlet Instead of Stars was published by tall-lighthouse press in 2009. Her debut collection Luxe was published by Salt in November 2013. You can read more about her on her website: http://amyvkey.com/ Photo © Matt Agan.

Rachael Allen is co-editor of poetry anthology series Clinic and online journal tender. A pamphlet of her poems has been published by Faber as part of the Faber New Poets series.

Emily Berry is a poet, writer and editor. Her debut poetry collection Dear Boy (Faber & Faber, 2013) won the Forward Prize for Best First Collection (2013) and the Hawthornden Prize (2014). She is currently working towards a PhD in Creative and Critical Writing at the University of East Anglia.

Liz Berry was born in the Black Country and now lives in Birmingham. She received an Eric Gregory Award, an Arvon-Jerwood mentorship and won the Poetry London competition in 2012. Her debut collection, Black Country (Chatto, 2014), was a PBS Recommendation and won the Forward Prize for Best First Collection.

Julia Bird grew up in Gloucestershire and now lives in London, where she works for the Poetry School and as an independent live literature producer. She has published two collections – Hannah and the Monk (Salt, 2008) and Twenty-Four Seven Blossom (Salt, 2013) – and she’s currently working on a secret poetic biography of a particular 1930s artist.

Sophia Blackwell’s debut collection, Into Temptation, was published in 2009 and a novel, After My Own Heart, in 2012. She has been published in Rising, Trespass, Fuselit, Diva and Time Out.

Sophie Collins is co-founder of tender, an online quarterly promoting work by female-identified writers and artists. Her poems and translations have appeared or are forthcoming in Poetry, Poetry London, Oxford Poetry, and elsewhere. In 2014 she received an Eric Gregory Award. She is currently carrying out research on poetry and translation at Queen’s University Belfast.

Nia Davies is a poet and editor. Her pamphlet of poems Then spree came out in 2012 from Salt. She edits Poetry Wales and co-edits Poems in Which. Her next publication is a chapbook: Çekoslovakyalılaştıramadıklarımızdanmısınız or Long words.

Francine Elena’s chapbook Christmas Lantern is published by 3:AM Press. Her unpublished pamphlet Fluoro was shortlisted for the 2014 Pighog Poetry School Prize. Her poems have appeared in the Best British Poetry 2013 and Furies anthologies as well as Clinic, 3:AM Magazine, Poems in Which and The Quietus among others.

Sophie Herxheimer is an artist and a poet, interested in text, image, collaboration and performance. She’s held numerous residencies (e.g. for London International Festival of Theatre, Transport for London) and is currently making a book in a forest for Fermynwoods Contemporary Art. Her work has been exhibited and published widely. www.sophieherxheimer.com

Holly Hopkins lives in London. She won an Eric Gregory Award in 2011 and her debut pamphlet, Soon Every House Will Have One, won the 2014 Poetry Business Pamphlet Competition and was Poetry Book Society Pamphlet Choice.

Emma Jeremy was born in Bristol and is currently based in London working towards a Masters degree in Creative Writing. Her work has appeared in Rising, Poems in Which and The Voices Inside Our Heads.

Suzanne Joinson is a novelist, poet and non-fiction writer. Her debut novel, A Lady Cyclist’s Guide to Kashgar, was published by Bloomsbury in 2012. In 2007 she won the New Writing Ventures Award for her short story ‘Leila Ahmed’. She writes for a range of publications and lives by the sea in Sussex.

Angela Kirby’s poems have been translated into Romanian, performed on BBC Television and Radio Four and won several prizes and commendations including BBC Wildlife Poet of the Year in 1995 and 2001. She has published three collections with Shoestring Press: Mr Irresistible (2004), Dirty Work (2008) and The Scent of Winter (2013).

Fran Lock is a sometime itinerant dog whisperer and poet, now living and working in London. Her work has appeared in various places, including Ambit, Poetry London, The Stinging Fly and The Rialto. Her debut collection Flatrock (Little Episodes) was published in 2011 and her second collection The Mystic and The Pig Thief (Salt) was published in 2014.

Amy Mackelden lives in Newcastle upon Tyne. She won a Northern Promise Award from New Writing North in 2011 and co-founded northern poetry magazine Butcher’s Dog. She co-edits Feminist Trash TV blog Clarissa Explains Fuck All, and is working on her first collection.

Sharanya Manivannan is the author of a book of poems, Witchcraft (Bullfighter Books, 2008). Her poetry, fiction and essays have appeared in Hobart, Wasafiri, Drunken Boat, Prairie Schooner, Killing The Buddha and elsewhere. She has received an Elle Fiction Award and a Lavanya Sankaran Fellowship. She lives in India.

Kathryn Maris is from New York City. She has won a Pushcart Prize, an Academy of American Poets award and fellowships from the Fine Arts Work Center in Provincetown and Yaddo. She lives in London, where she teaches creative writing and writes essays and reviews. God Loves You (Seren) was published in 2013 and is her second collection of poems.

Karen McCarthy Woolf is the recipient of an Arts and Humanities Research Council scholarship from Royal Holloway, where she is a PhD candidate. She has edited three anthologies, most recently Ten: The New Wave (Bloodaxe, 2014), and her collection An Aviary of Small Birds (Carcanet, 2014) is a Poetry Book Society Recommendation.

Rebecca Perry is a graduate of Manchester’s Centre for New Writing. She has had work published in Poetry London, The Quietus and Best British Poetry 2013. Her pamphlet, little armoured (Seren), and was a Poetry Book Society Pamphlet Choice. Her first full collection, Beauty/Beauty, is forthcoming from Bloodaxe in January 2015.

Kathy Pimlott grew up in Nottingham but has lived in London for the last forty years, most of that time in Seven Dials, where she looks after bollards and street signs. Her poems have appeared in Magma, The North, South Bank Poetry and Mslexia.

Andrea Quinlan is a poet and writer based in New Zealand. Her chapbook We Speak Girl was published by Dancing Girl Press in 2012 and The Mysteries of Laura was published by Birds of Lace in 2013. She has been published in brief, Gaga Stigmata, Delirious Hem, NNATAN and Finery.

Jacqueline Saphra’s first full collection, The Kitchen of Lovely Contraptions (flipped eye), was developed with funding from Arts Council England and nominated for The Aldeburgh First Collection Prize 2012. Her illustrated book of prose poems, If I Lay on my Back I saw Nothing but Naked Women, was published by the Emma Press in 2014.

Brenda Shaughnessy is the author of Our Andromeda, Human Dark with Sugar and Interior with Sudden Joy. Her poems have been published in Best American Poetry, The New Yorker, Paris Review and McSweeney’s. A 2013 Guggenheim Fellow, she teaches at Rutgers-Newark and lives in Brooklyn with her family.

Two of Catherine Smith’s poetry collections, The New Bride and Lip, have been shortlisted for Forward Prizes. In 2004, she was included in the PBS/Arts Council ‘Next Generation’ promotion and in Mslexia’s ‘Best Ten New Women Poets’. Her latest poetry project, The Ballad of the New Cockaigne, will be published by Pighog in 2014.

Martha Sprackland lives in London by way of Merseyside and Madrid. Work has appeared in Poetry Review, the London Review of Books and Poetry London, amongst others. She was co-founder and poetry editor of Cake magazine, and is Assistant Poetry Editor at Faber & Faber. In 2014 she won an Eric Gregory Award.

Camellia Stafford was born in Warwickshire and she read English Literature and Language at King’s College London. Her debut pamphlet, another pretty colour, another break for air is published by tall lighthouse and Letters to the Sky, her first collection, is published by Salt. Camellia lives in London and works in museum education.

Claire Trévien is the author of Low-Tide Lottery (Salt, 2011) and The Shipwrecked House (Penned in the Margins, 2013), which was longlisted in the Guardian First Book Awards.

Megan Watkins works part-time at the Royal Academy and writes poetry. She is a contributor to various magazines and was featured in The Emma Press Anthology of Motherhood. She often collaborates with her friend the artist and writer Audrey Reynolds. She has two children, a cat and a hamster.

Laura Webb was born in 1985. She recently completed a PhD about Ted Hughes at Sheffield University. Amongst other places, she has had poems published in CAST: The Poetry Business Book of New Contemporary Poets, Poetry Ireland Review, The Manchester Review, Stand and The Rialto. She works for an education charity.

Alison Winch has published in Rialto 75 and Poems in Which 3 and 5, among others. She was featured poet in Magma 52 and is currently working on her first collection. She has published nonfiction work, including Girlfriends (Palgrave 2014). She is based in London.