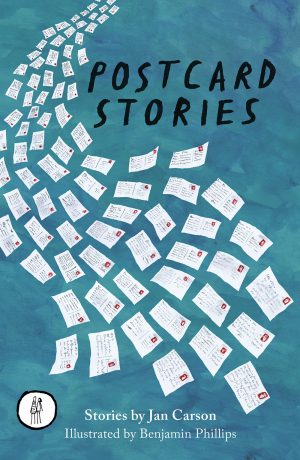 Every day in 2015, Jan Carson wrote a story on the back of a postcard and mailed it to a friend. In this collection of highlights, Carson presents a panoramic view of contemporary Belfast – its streets, coffee shops, museums and airports – as series of small but perfectly-formed snapshots of her home.

“Carson’s mini stories themselves oftentimes show a wonderful flight of imagination, blooming out of the seemingly everyday scenes and encounters she comes across in her home town into fully formed dramas and vignettes, myths and fantasies of their own. Testament to Carson’s imagination is the range of stories and themes on offer; no two mini narratives in the book share characters or actions, each its own perfect little imaginarium that covers a whole gamut of sentiments.” – Jade Craddock, Nudge Book

“To tell a story as short as these the prose must throughout remain pithy. The author presents the quirks and poignancy of little moments in everyday life with warmth and affection. These small snapshots of the ordinary become extraordinary when painted with her words.” – Jackie Law

“Carson presents innocuous stories that take place in and around Belfast. Some of these stories are hugely successful, and often haunting in their apparent transparentness.” – Siobhan Denton, Sabotage Reviews

Jan Carson is a writer based in Belfast, Northern Ireland. Her first novel, Malcolm Orange Disappears, was published by Liberties Press in 2014, followed by a short story collection, Children’s Children, in 2016. Her short story ‘Settling’ was included in the anthology The Glass Shore: Short Stories by Women Writers from the North of Ireland (New Island, 2016), which won the BGEIBA Irish Book of the Year Award in 2016. Her short stories have been broadcast on BBC Radio 3 and 4 and published in journals including Storm Cellar, Banshee, Harper’s Bazaar and The Honest Ulsterman. In 2014 she was a recipient of the Arts Council NI Artist’s Career Enhancement Bursary. Photo credit: Laura Conlon

Artist and illustrator Benjamin Phillips lives in St Leonards-on-Sea and shares a studio in Hastings with his partner and dog. Benjamin finds inspiration in human interaction, the humour and turmoil of everyday life and the joy of repetition. His debut graphic novel, Peanutborough Cucumberland, was published by Log Press in 2012, and he has worked for clients such as The New York Times, Virgin Media, the Jerwood Gallery and Wichita Records. benjaminphillips.co.uk