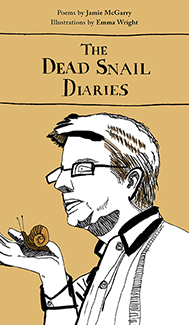 One night in May 2009, Jamie McGarry stepped on a snail. Five days later, racked with guilt, he returned to the scene of the crime and was shocked to discover a chalk outline where the body had been – and off to one side, a tiny book. It seems that the recently deceased mollusc had been a keen writer, and Jamie had chanced upon its diary.

Jamie’s duty was clear: he must translate the book into English and share it with the world, that humankind might move a step closer to understanding this most mysterious of animals. Now, with this book in your hands, you too can take that step. Just be sure to look where you’re going first.

‘I really, really enjoyed The Dead Snail Diaries – a funny, daft, strangely poignant collection, which is also a tribute to the qualities of the slow, the small and the overlooked. It is the best book of snail poetry I’ve ever read.’ — Kate Fox

‘These snail poems are not slow to appeal.’ — John Hegley

‘[…] a series of funny and uncannily touching poems that you certainly do not have to be a snail enthusiast to enjoy, accompanied by a delight of illustrations by the talented Emma Wright.’ — Charlotte Buckley for the Cadaverine magazine

‘They are wonderful examples of their type, the kind of entertaining pleasure-poem that would make a good gift for someone who is nicely cultured, but who has fallen out of the habit of reading poetry regularly; a coffee-table book or train-journey story for a person with an English degree who has taken a job in a bank, but who still occasionally reads.’ — Bethany Pope for Sabotage Reviews

Jamie McGarry was born in Norwich in 1988, and grew up in North Wales and East Yorkshire. He attended university in Scarborough, earning a degree in English Literature and Culture, and in 2008 he founded independent publishing house Valley Press, which he continues to run to this day. After uncovering and translating the original ‘snail diary’ in 2009, Jamie made it his mission in life to honour the author’s memory and spread the word of his literary prowess far and wide.