The Emma Press Anthology of Fatherhood 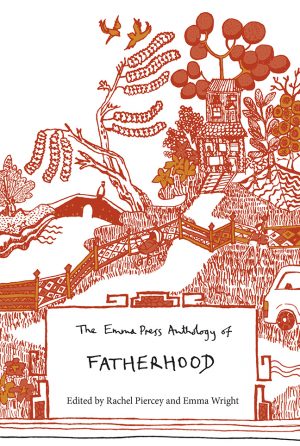 Fathers consider their children and children consider their fathers in this powerful book about masculinity, legacy and distance. Silence dominates as poets explore words unspoken and feelings suppressed, while reconciliations emerge from unlikely places: through wearing a father’s gloves; through ghostly meetings in pubs and train stations; and at the bottom of the garden by the shed.

You can read an extract from the introduction on our blog and a discussion of one of the poems, ‘Brown Leather Gloves’, over on Poem Club.

‘There is an absence of sentimentality in this collection that is undoubtedly a tribute to the rigour of editors Rachel Piercey and Emma Wright.’ — Greg Freeman on Write Out Loud

‘This collection is less about fatherhood than about death, life and birth, which is perhaps not such a very different thing: the central fact of fatherhood, and of a child’s relation to its father, seems to be fear of loss.’ — Paul McMenemy on Lunar Poetry

‘These are moving poems which have a perfect balance of craft and heart.‘ — Angela Topping on Sabotage Reviews

‘It’s difficult to avoid the adjectives ‘moving’ and ‘touching’ when commenting on many of these poems, but to their credit they are rarely sentimental and some do portray less than perfect relationships. […]  While many address the angsts and anxieties of being a father, and how easily a child can be hurt, most are joyful and the exuberance of twenty-first century fathers contrasts with the buttoned-up-ness of many of their earlier incarnations portrayed here.’ — Jacqui Rowe for Bare Fiction

Alan Buckley’s debut pamphlet Shiver (tall-lighthouse, 2009) was a Poetry Book Society choice. He has been commended twice in the Bridport Prize, and was shortlisted for the inaugural Picador Poetry Prize. He works in Oxford as a psychotherapist, and as a school writer-in-residence for the charity First Story.

John Canfield grew up in Cornwall and now lives in London. His poems have appeared in magazines and anthologies including Oxford Poetry XIV.2, Transom Issue 5, Newspaper Taxis (Seren, 2013), Coin Opera II (Sidekick Books, 2013) and A Poetic Primer for Love and Seduction (The Emma Press, 2014). He trained as an actor, but due to a clerical error currently works in an accounts department.

Oliver Comins lives and works in West London. He has five children and his early poems were collected in a Mandeville Press pamphlet and Anvil New Poets Two. More recently, his poems have appeared in magazines including The Echo Room, The Rialto, Warwick Review and Yellow Nib.

Nathan Curnow is the father of four young daughters and is a former editor of Going Down Swinging. His work has featured several times in Best Australian Poems (Black Inc, 2008, 2010 and 2013) and he has won numerous awards, including the Josephine Ulrick Poetry Prize. His most recent collection, RADAR, is available through Walleah Press.

Hugh Dunkerley grew up in Edinburgh and Bath and now lives in Brighton with his wife and young son. He has published one full collection, Hare (Cinnamon Press, 2010) and is currently working on a new collection about fatherhood. He was the inaugural West Sussex Poet Laureate from 2000-2012.

Flora de Falbe is in her final year of school in London. She was a Foyle Young Poet in 2011 and 2012 and has read at events including the Ledbury Festival and Chelsea Fringe. Her work is published or forthcoming in CAKE, Rising, The Emma Press Anthology of Motherhood and an anthology by Eyewear Publishing.

Sarah Fletcher is a British-American poet. She won a Foyle Young Poet of the Year in 2012 and first and second prize in the Christopher Tower Poetry Prize. Her poems have featured in The Cadaverine, The London Magazine, and The Ofi Press, and her writing was displayed at Olympic Park during the 2012 Olympics.

John Fuller is an Emeritus Fellow of Magdalen College, Oxford, where for many years he was Tutor in English. Chatto and Windus published his Collected Poems in 1996. His latest collection is Sketches from the Sierra de Tejeda (Clutag Press, 2013). His prose poem collection The Dice Cup is publishing with Chatto in October 2014.

Jeremy Grant lives in Leicestershire with his wife, son, and cat, and teaches at a local sixth form college. His poems have appeared in literary magazines such as Smiths Knoll, Poetry Nottingham, The French Literary Review and The Journal. He has also co-written teaching guides for the British Film Institute. Jeremy is currently developing a play about poetry with The 42nd Theatre Company.

John Grey was born in Australia and has been published in The Lyric, Vallum and the science fiction anthology The Kennedy Curse. He has work forthcoming in Bryant Literary Magazine, Natural Bridge, Southern California Review and 2 Bridges Review.

Robert Hamberger has been awarded a Hawthornden Fellowship and shortlisted for a Forward prize. He has published six pamphlets. His full-length collections are Warpaint Angel (Blackwater Press, 1997), The Smug Bridegroom (Five Leaves, 2002) and Torso (Redbeck Press, 2007). His fourth collection, Blue Wallpaper, is forthcoming with Waterloo Press. He lives in Brighton.

James Harris grew up in Shropshire and is the Collections Officer for the Corinium Museum in Cirencester. At the time of publication, he is brand-new to fatherhood.

Sara Hirsch is based in London and best known for her work as a spoken word artist. She is the current UK Slam Champion and regularly performs at poetry events across the country and abroad. This is Sara’s first published poem and she is thrilled to be part of the Anthology.

Lynn Hoffman was born in Brooklyn and lives in Philadelphia. He is the author of The Short Course in Beer, leads wine and beer tastings, and enjoys loafing and fishing. His cancer comedy memoir, Radiation Days, is publishing in New York in summer 2014.

Kirsten Irving is half of the team behind collaborative poetry press Sidekick Books. Her poetry has been shortlisted for the Forward and Bridport Prizes, translated into Russian and Spanish and thrown out of a helicopter. She’d like to thank her own father for enriching her life with Louise Brooks bios, Classic Shell and Chris Farlowe’s version of ‘Out of Time’.

Max Maher, from Bexhill-on-Sea in East Sussex, is currently studying English at Cambridge University. He tries to creatively depict honest emotion in his poetry and his biggest inspirations are JD Salinger and singer-songwriter Conor Oberst.

Born in West Hartlepool, County Durham, Martin Malone now lives in Warwickshire. He won the 2011 Straid Poetry Award and the 2012 Mirehouse Prize, and his first full collection, The Waiting Hillside, is published by Templar Poetry. Currently studying for a PhD in poetry at Sheffield University, he edits The Interpreter’s House poetry journal.

Harry Man was born in 1982. His poetry has appeared in New Welsh Review, Poems in the Waiting Room and elsewhere. He holds an MA in Creative Writing from Bath Spa University. His first pamphlet, Lift (tall-lighthouse, 2013), won the UNESCO Bridges of Struga Award.

Katrina Naomi is completing a creative writing PhD at Goldsmiths focusing on violence in poetry. Her work has appeared in The TLS, Poetry Review and The Spectator. Her collection The Girl with the Cactus Handshake (Templar Poetry, 2009) was shortlisted for the London New Poetry Award. Katrina was the first writer-in-residence at the Bronte Parsonage Museum.

Rachel Piercey was President of the Oxford University Poetry Society and won the Newdigate Prize in 2008. She is currently an editor at Cadaverine magazine and her illustrated pamphlet of love poems, The Flower and the Plough, was published by the Emma Press in January 2013. Her second pamphlet, Rivers Wanted, is forthcoming with The Emma Press in October 2014.

Stevie Ronnie lives in rural Northumberland where he works as a writer and multi-disciplinary artist. His first full-length poetry collection is Manifestations (Red Squirrel Press, 2013). Stevie is currently working on a series of visual and literary works inspired by a recent residency in the High Arctic.

Jacqueline Saphra has won several awards including first prize in the Ledbury Poetry Competition. Her pamphlet, Rock’n’Roll Mamma, was published by Flarestack and her first full collection, The Kitchen of Lovely Contraptions (flipped eye, 2011) was developed with funding from Arts Council England and nominated for The Aldeburgh First Collection Prize. An illustrated book of prose poems is forthcoming from the Emma Press in 2014.

Tom Sheehan served in Korea in 1951. His publications include: Epic Cures; Brief Cases, Short Spans; Collection of Friends; From the Quickening; Korean Echoes; The Westering (a National Book Award nomination); Murder at the Forum; Death of a Lottery Foe; Death by Punishment; and An Accountable Death. He has 24 Pushcart nominations and his next collection of short stories, In the Garden of Long Shadows, is publishing in 2014.

Di Slaney was born in 1966 and lives on a Nottinghamshire smallholding with more animals than is sensible. She runs a marketing business and co-owns Candlestick Press. Di has been published in various magazines, including Magma, The Rialto, The Interpreter’s House, Brittle Star, LeftLion and Lighten Up Online.

Jon Stone was born in Derby and is currently based in London. His collection, School of Forgery, was a Poetry Book Society recommendation and he won an Eric Gregory Award in 2012. He’s also co-creator of Sidekick Books, publishers of collaborative creative anthologies.

Richard Thompson is a clinical psychologist. He grew up in rural Nova Scotia, Canada, and now lives and works in Texas. His poems have previously appeared in Scissors and Spackle, Empirical Magazine and Skive Magazine, among others.

Jerrold Yam is a law undergraduate at University College London and the author of Intruder (2014), Scattered Vertebrae (2013) and Chasing Curtained Suns (2012). His poems have been published in more than eighty literary journals and anthologies across twenty countries. He has received literary awards from the British Council, Poetry Book Society and National University of Singapore, and is the youngest Singaporean to be nominated for the Pushcart Prize.

Sorry, the comment form is closed at this time.