Captain Love and the Five Joaquins, by John Clegg 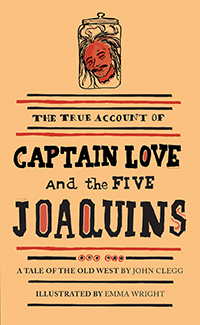 A tale of the Old West by John Clegg, illustrated by Emma Wright

‘Love’s worry feeds on worry
like the dustdevil that pivots round to eat itself.

It can’t be tamped down.
Both stitched eyes are coming open.’

Captain Love and the Five Joaquins is a thrilling and true-ish adventure story set in the vividly-evoked Old West and told through verse and prose poems. We follow the progress of the bounty hunter Harry Love, on his triumphant tour of California with the supposed head of horse-thief Joaquin Murrieta in a jar, and the Five Joaquins, a notorious gang of outlaws hard on Love’s tracks.

You can read more about the book over on our blog, where John Clegg has written about the historical inspiration to his poem. 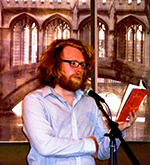 ‘ […] a fabulous tale of the American Wild West featuring a pickled head in a jar, a bounty wrongfully claimed by a neurotic villain, the expedient murder of a cowhand and a final dramatic showdown set against the rugged scenery of the California desert. But as befits a good ‘True Account’, Clegg’s telling of the story is riddled with tricks and literary chicanery from the start as different strands of the Zorro legend emerge and entwine.’