The Emmores, by Richard O’Brien 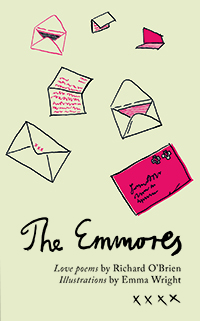 Richard O’Brien deploys every trick in the love poet’s book in The Emmores, a collection of poems written in response to a long-distance relationship. An irresistible mix of tender odes, introspective sonnets, exuberant free verse and anthems of sexual persuasion. Loosely inspired by the Roman poet Ovid’s Amores.

You can read an informal discussion about ‘The Smell of Apples’, a poem from the collection, over in Poem Club.

‘Like Ovid, Richard O’Brien explores […] what Oscar Wilde called “the truth of masks”. Love is treated as a game with high stakes – “Another town. You spin the box / then come towards me, blade aloft” (Magician’s Assistant) – and we are never far from a sense of performance and display. But O’Brien knows art is not love. Like rubber-band balls, poems may be held together by internal tension – “the force / of endlessly pulling themselves apart” – but what we ask of love is “that familiar kink / between the shoulders of the person who / stoops down to you, and peels back each band”.’ — Andrew McCulloch, the Times Literary Supplement

‘… love poetry that is almost courtly in its complexity, like a finely wrought love-token, and deeply pleasurable to read.’ — David Clarke, Sabotage Reviews

Richard O’Brien’s first pamphlet, your own devices, was published by tall-lighthouse press in 2009, as part of the Pilot series for British and Irish poets under 30. His most recent publication is A Bloody Mess (Dead Ink/Valley Press, 2015). In 2015, he was the winner of the inaugural London Book Fair Poetry Prize (Sonnet category). His work has featured in Poetry London, Oxford Poetry, Ink Sweat & Tears, The Salt Book of Younger Poets and The Best British Poetry 2013, and his writing for children appears in the Emma Press anthology Falling Out of the Sky. Richard lives in Birmingham, where he is studying for a PhD on Shakespeare and the development of verse drama. His first verse play, Free for All, premiered at the Edinburgh Festival Fringe in 2015.