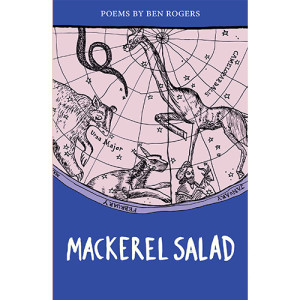 Poems by Ben Rogers
With an introduction by Tamar Yoseloff

The poems of Mackerel Salad lure the reader into a series of disorientating situations which explore unreliable maps, being lost, trying to hide, and the nature of exploration itself. We travel through space, across seas, into a medieval medina, inside a disquieting hostel kitchen in outback Australia, and round and round and round a convoluted traffic junction in Brighton. All the while, the world won’t stop moving, routine and ritual cannot be relied upon, even names are wearing out, and today is the last day of the salad.

‘Ben Rogers’ poems chronicle those passing moments which are made significant for having been noticed. Like another poet of the passing moment, Elizabeth Bishop, Rogers is always precise, ensuring that his readers see exactly what needs to be seen. His keen eye is trained on the ordinary – a teaspoon, a houseplant – objects which may not seem attractive enough in themselves to warrant a poem, but become so in Rogers’ generous and expansive scope. […] The poems in Mackerel Salad present a stand against indifference in a world that presents us with indifference. Rogers shows us the world we thought we knew, which, when we weren’t looking, somehow became a little less familiar.’ — Tamar Yoseloff in her introduction to the book

‘The speaker is a creature of habit (the imposition of control again) who’s nevertheless experimenting with spontaneity (freedom from pre-conceits). It’s ‘the usual café’ and ‘the mackerel salad’, but ‘a square in front of a church’, suggesting this particular lunch spot is unfamiliar. His pacing is ritualistic – neurotic even – but creative thoughts are liberated by it.’ – Rebecca Watts, New Poetries

Ben Rogers lives and works in London. He studied English at Cambridge and Film/TV Studies at the British Film Institute, specialising in East European animation. His poetry has been published in journals and anthologies, including Magma, 14, Long Poem Magazine, the Emma Press’s Slow Things and Carcanet’s New Poetries VI. Previously, he has also written the script for a puppet show, and a radio sketch show that aired on BBC London.