Raspberries for the Ferry, by Andrew Wynn Owen 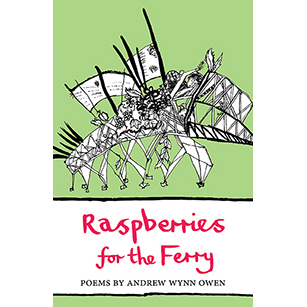 Raspberries for the Ferry is the debut pamphlet from young poet and major new talent Andrew Wynn Owen, whose delight in the possibilities of language and form is utterly infectious. Tortoises, dancers, lovers and whales all beguile in poems which are playful, charming and frequently heartfelt, grounded in the past and bubbling with modern verve. You can read a discussion of the title poem, ‘Raspberries’, over on Poem Club.

Andrew Wynn Owen is an Examination Fellow at All Souls College, Oxford. In 2015, he received an Eric Gregory Award and, in 2014, Oxford University’s Newdigate Prize. His first poetry pamphlet, Raspberries for the Ferry, was published by the Emma Press in 2014, followed by a collaboration with John Fuller, AWOL, in 2015.

‘He negotiates rhyme, rhythm and structure as nimbly as Houdini negotiated a straitjacket; his ideas are no more boxed in by the shapes which hold them than Escher was limited by the lines of a staircase. At every turn, his language derives a kind of glee from evading its captors, chafing and fretting at its formal constraints until the edges of the lines spit sparks.’ — Richard O’Brien, in his introduction to Raspberries for the Ferry

‘My over-riding sensation when reading the poems was one of often delighted surprise. Wynn Owen is bold and witty, revelling in unusual connections.’ — David Clarke for Sidekick Books Reviews

‘It is an overtly literary collection – with poems imagined between Robert Browning and Elizabeth Barrett Browning, as well as references to classical mythology in abundance – yet there is something youthful and earnest about the voices used throughout which transports it somewhere new entirely.’ — Alexa Turnpenney for Cadaverine magazine

‘It is in his most deeply emotional poems, in which his talent most truly shines. “The Lay of the Lake,” “Your Smile,” and the pair of letter-poems between the poets Robert Browning and Elizabeth Barrett Browning, to name a few, are touching and well-executed without delving into the saccharinity or stodginess of its forebears.’ — C. A. LaRue for Sabotage Reviews