The Noisy Classroom: Poems for Children

Poems for children, by Ieva Flamingo 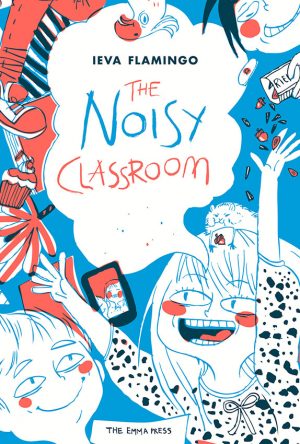 It isn’t easy being a kid – especially not in the noisiest class in the school. Some days, you struggle with algebra, or too much homework. Sometimes, one of your fellow pupils just won’t SHUT UP. And sometimes, the hardest thing is just trying to fit in. When the class feels like a many-headed dragon, how can you find a place for yourself? Would you feel less lonely if you could smuggle in a cat? And when your parents are fighting, don’t you find yourself looking into other people’s windows on the walk back home?

Ieva Flamingo’s children’s poems capture the emotional highs and lows of childhood with a sharp, surreal eye and a touching sympathy. The Noisy Classroom is a friend of a book: the poems here understand the pressures faced by children, but they also take in stressed parents, overworked teachers who dream of holidays in Iceland, and the fairies who clean the school at the end of the day. Not to mention the headmaster: after all, he was young once too…

Aimed at children aged 8+. Contains 40 poems and features bonus materials, including ideas for writing your own poems.

Supported by Latvian Writers’ Union (Latvijas Rakstnieku Savienība) and Ministry of Culture of the Republic of Latvia.

‘The poems brim with a wide range of scenarios and emotions, building up a picture of school life in a way that will resonate with all readers. A sense of mischief and play pervades the collection, evoking the magical atmosphere which reigns in every school and classroom.’ Dace Bargā, children’s literature editor at Satori.lv

‘Ieva Flamingo captures just the right tone, conveying the emotional charge of school life incredibly precisely. It’s extremely appealing. The pupils’ existence is dominated by social media, modern technologies and the various demands made upon them by school and parents.’ Juris Petraškevičs, professor at the Art Academy of Latvia & jury member of the 2016 Jānis Baltvilks Prize for children’s literature

‘The subject matter is rooted in daily life in school but it ranges wider, referencing the school of life as well as referring to actual classrooms and how they interrelate.  ‘Whatever flames might flicker in eyes,/I won’t be deceived or fooled./because you learn about warmth in real life – / they don’t teach you that in school.’ (‘What They Don’t Teach You in School’)’ – CLPE

Ieva Flamingo (the pen name of Ieva Samauska) is one of the most prolific Latvian children’s authors writing today. She has been a journalist at various newspapers and magazines for over twenty years, and for the last ten years has worked at Ieva, Latvia’s biggest weekly magazine. She won the Pastariņš Prize for Latvian Children’s Literature in 2015 and her books have been nominated for the International Jānis Baltvilks Baltic Sea Region Award four times.

Her first collection of lyrical poems, Kā uzburt sniegu/How to conjure up snow (liels un mazs, 2006), was adapted for the Latvian National Theatre in 2007. Ieva lives in Saldus, a small town in Latvia, with her family, three cats and a white dog.

Vivianna Maria Staņislavska studied Printmaking and Graphic Arts at the Art Academy of Latvia. The Noisy Classroom is her debut illustrated book and won her the Jānis Baltvilks ‘Jaunaudze’ Award in 2016.

Žanete Vēvere Pasqualini works as a literary agent for Latvian Literature and translates in her spare time. Her translation of Kristine Ulberga’s The Green Crow is forthcoming from Peter Owen Publishers, and she translated several stories for The Book of Riga, forthcoming from Comma Press.

Sara Smith studied Italian and Business at Edinburgh University, where she was awarded a Swiss Arts Council prize. She lives in Rome and works as a teacher and translator, and her work has been published by Guerra Editori, Artes Faveo and Compagnia Editoriale.

Richard O’Brien is an editor at the Emma Press, and in 2017 won an Eric Gregory Award for his own poetry. Richard has published three pamphlets, and also writes poetry and plays for children. He especially enjoyed finding ways to preserve Ieva’s rhymes and rhythms in this English version.