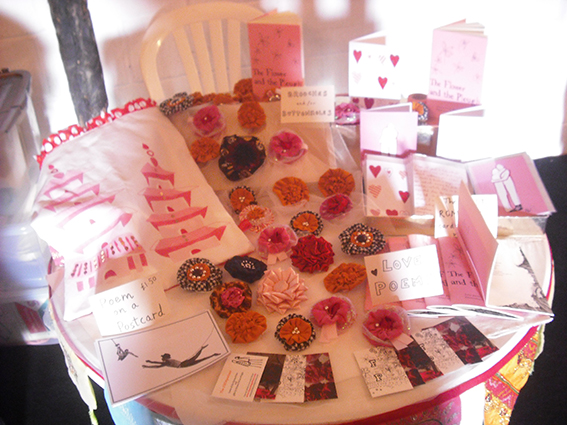 I had my first stall at a craft fair today. It was in a barn on Stokes Farm near Wokingham, and before you ask, no, I didn’t make a killing. I had just the one customer, and since this was my friend Harriet’s mum I’m not sure how much this counts if we’re trying to evaluate my sales techniques. But, but but but, making money was not the point of my first fair, and I’d spoken to enough craft fair veterans to realise that this was an unlikely outcome anyway. The reason I did the fair was because I wanted to give myself an incentive to put together a decent-sized collection before Christmas and start learning about the craft fair circuit.

So, what did I learn? The most important thing as far as my business is concerned was:

1. People from the Wokingham area who go to craft fairs on a Friday afternoon do not want to buy silly and romantic cards for their significant others. Literally three women said to me after reading my Napoleon card, ‘Ha, that’s very nice, but not for my husband! We’re LONG past that.’ An alternative interpretation of this data would be: go to Wokingham craft fairs if you want to learn some harsh truths about marriage.

The majority of my creations are love- or romance-themed, so if I want to thrive on the Wokingham scene I’ll have to rethink my product range.

Lesson 2: Alternative ways of arranging my stall. I don’t have a huge amount of stuff right now, so I chose a small table and piled it on as best I could on 3 gold shoeboxes. Looking at the vintage clothes stall next to me, I wondered if I should have been more imaginative in the display of my goods. For example, tiny pigeonholes. I also wished I had more things so I could pile it up even more, and then browsers could discover little gems amongst the rubble.

On the other hand, and on my other side, I had the example of Jayne Ward, whose incredibly cool textile art had plenty of space to breathe and looked classier for it.

Lesson 3: When standing in a barn for seven hours, be sure to wear thermal underwear and two pairs of socks.

All good lessons, I think you’ll agree. Next time I do a craft fair, I should be warmer, better prepared for the demographic, and maybe I’ll even make some money.