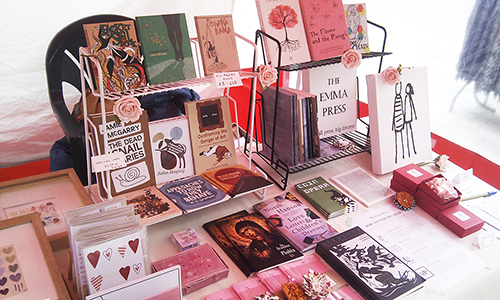 Another month for the pop-up poetry shop

If you were just kicking yourself for not having made it down to Lower Marsh Market during office hours on a Friday recently, then stop kicking yourself. I’ve been enjoying the market very much, so you now have another month in which to wander down and get your hands on some poetry books which you might otherwise have had to order online, or maybe never seen at all. These are beautiful, tactile objects, so I would recommend strongly against forgoing this experience – these books have to be seen and felt to be believed, and where better to browse than in a sunny street in South London under a gazebo presided over by ME?

As for the kinds of books I have to offer, there is of course The Emma Press’s The Flower and the Plough, resplendent in pink, and also a variety of books from the following independent poetry publishers:

* Donut Press. Donut Press has been producing beautiful poetry pocketbooks since 2001, when book-selling colleagues Andy Ching (editorial) and Liam Relph (design) joined forces to create a small publishing dream team. They are based in Devon and are publishing Murder Bear, by W.N. Herbert in the autumn.

* Sidekick Books. Sidekick Books was founded in 2009 by Jon Stone and Kirsten Irving, both award-winning poets. They publish anthologies with themes as diverse as Japanese monsters and British birds. They are currently working on Coin Opera II, a poetry anthology about video games, which was funded through a successful Kickstarter campaign.

* Valley Press. Valley Press is a dynamic Yorkshire-based publishing house, founded by writer and poet Jamie McGarry in 2008. Valley Press recently published the poetry produced by official Glastonbury Festival poet-in-residence Kate Fox and will be publishing an anthology of the winning short stories from The Big Issue In The North New Writing Award. 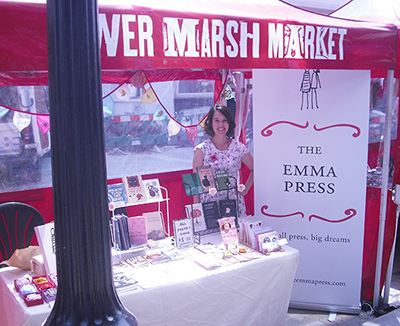