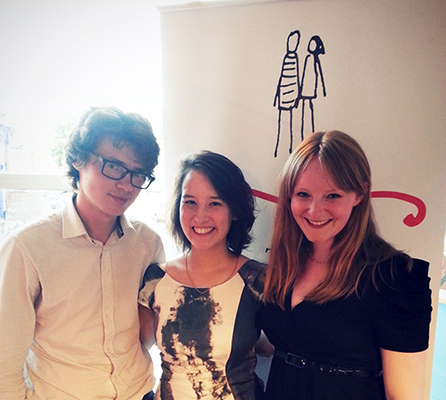 The event, which took place on Saturday 3rd August, was a two-hander featuring Rachel and Richard, both friends of The Emma Press. Here are the introductions I wrote for the Keen Bean event page … 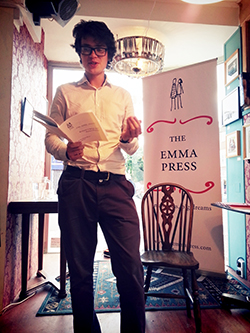 Richard O’Brien is one of the most exciting and in-demand young poets around, popping up most recently at the BBC Proms. He won the Foyle Young Poets of the Year award in 2006 and 2007, and his debut pamphlet, your own devices, has almost completely sold out. He has a second pamphlet coming out in the autumn with Dead Ink, as well as one scheduled for January 2014 with The Emma Press.

Rising star Rachel Piercey was President of the Oxford University Poetry Society and won the Newdigate Prize in 2008. She writes beautiful, lucid poetry and her illustrated pamphlet of love poems, The Flower and the Plough, was published by The Emma Press earlier this year. Last month she joined the editorial team on Cadaverine Magazine. 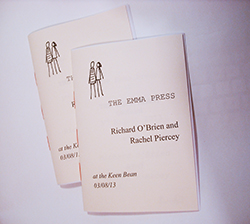 With a line-up like that, I was pretty confident about how the poetry side of things was going to go, but I also felt pressure to hold up my end of proceedings. I made some hand-stitched pamphlets, so the poets wouldn’t have to shuffle bits of paper around on stage, and I planned an informal speech explaining the origins of the press. The Keen Bean had the intimate atmosphere sorted already, so all that was left was the running order. At the suggestion of Rachel, I organised her and Richard’s poems into alternating chunks of 2-5 poems, designed to work as individual segments but also to speak to the preceding and following mini-sets. 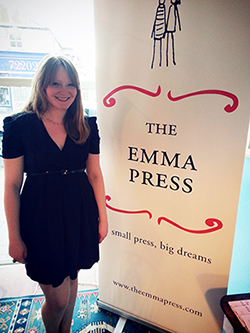 Rachel Piercey next to my banner

Richard and Rachel, as it turns out, have very complementary styles. Richard approaches his subjects with great intensity and depth while Rachel has a sparer touch, drawing out her often startling observations with deceptive simplicity. They share a love of form and a nice line in almost masochistic emotional honesty, and watching them alternate was like taking a too-deep breath in and then puffing it out too fast: both giddying and intense experiences, but in different ways. They were brilliant on Saturday, and I really hope we can put on this show again so more people can see it. The whole event went as well as I had hoped it would, not least due to the relaxed charm of the Keen Bean and Will Davies himself.

More Sharks Than Ever Before
Actaeon
Munch’s Cock

Ransom
The Smell of Apples
Orpheus

Know not me
Ride
Tonight, Matthew… 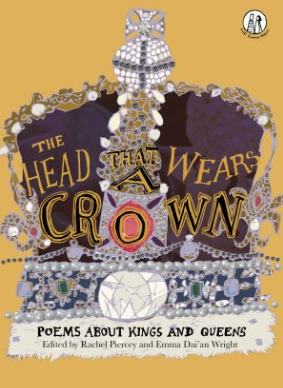