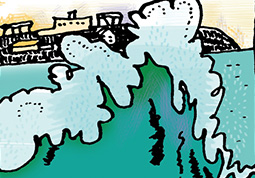 The Emma Press launches Open Call for Poems about the Sea

The Emma Press has launched an open call for submissions to a sea-themed poetry anthology due for release in October 2016.

The independent publisher, based in Winnersh, is inviting poets to send in up to three poems by 21st June 2015. According to the publisher’s rules, all people submitting must be a member of the Emma Press Club, whereby they must either have bought a book/ebook/set of postcards from the publisher’s website in 2015 or already have been accepted into an Emma Press publication. 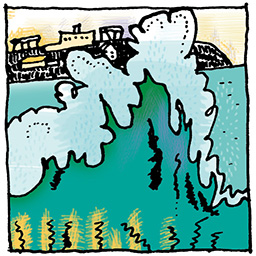 The brief for submissions states: ‘We want poetry to bear witness to the ocean’s harvest and wreckage, and writers to record the sea that leaks into their lives. […] We want to read verse that follows fishing trawlers and perilous crossings, charts the Middle Passage and the Bermuda Triangle, and to hear how coastlines differ for islanders and the land-locked, migrants and the lost-at-sea.’

The anthology will be edited by Eve Lacey, who previously edited Furies (For Books’ Sake, 2014), an anthology of contemporary women’s poetry.

Eve Lacey said: ‘The Emma Press is expert in anthologising new writing under broad themes, and the perfect publisher to do justice to the sea’s potential for poetry. There is almost infinite scope for all manner of sea-inspired poems in this anthology and I can’t wait to read the submissions. I am especially looking forward to poetry that pushes the boundaries of nature writing and opens our eyes to new ways of seeing the sea.’

Publisher Emma Wright said: ‘We were incredibly impressed by Eve’s work on Furies, so we were delighted when she approached us with her idea for the anthology. What with Amy Key and Best Friends Forever, Sarah Hesketh and The Emma Press Anthology of Age and now Eve, we have been very lucky in finding guest editors who understand our aims as a press and embrace all of our values.’

About the Emma Press

The Emma Press is an independent publisher dedicated to producing beautiful, thought-provoking books. It was founded in 2012 in Winnersh, UK, by Emma Wright, formerly of Orion Publishing Group. In 2014, the Emma Press was shortlisted for the Michael Marks Award for poetry pamphlet publishers. In 2015, Oils (Emma Press, 2014), by Stephen Sexton, was selected as the PBS Winter Pamphlet Choice.

The Emma Press’s publishing programme features themed poetry anthologies and single-author poetry and prose pamphlets, with an ongoing engagement with the works of the Roman poet Ovid.