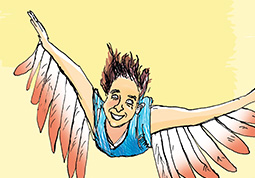 The Emma Press is publishing the first in a new series of themed children’s poetry anthologies on 18th June 2015.

Falling Out of the Sky: Poems about Myths and Monsters is a collection of new poems edited by Rachel Piercey (Newdigate Prize, 2008) and Emma Wright, with contributions from twenty poets including John Fuller (Forward Prize, 1996), Joseph Coelho (shortlisted for 2015 CLPE Poetry Award) and Abigail Parry (Eric Gregory Award, 2010). 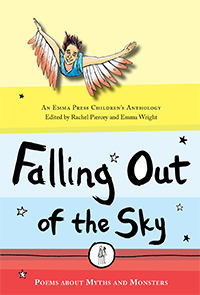 The poems retell or reference well-known myths, legends and fairytales, with an emphasis on ancient Greek myths. The book is fully illustrated with black line drawings, and the stories in the poems are accompanied by notes from the editors, providing context and extra details.

Publisher Emma Wright said: ‘Roger McGough, who is judging the CLPE Poetry Award this year, recently criticised the lack of poetry books being published for children. I believe wholeheartedly in the importance of poetry for children and as a poetry publisher I am delighted that I am in a position to do something about this. We are throwing all our resources behind Falling Out of the Sky, to bring it to as wide an audience as possible. We hope that we will receive support from booksellers and the press.’

The Emma Press intends to publish one new children’s poetry anthology each year and will launch an open call for submissions of poems about ‘space and aliens’ in July, for an anthology scheduled for publication in September 2016.

Publisher Emma Wright said: ‘Publishing poetry for adults is difficult enough, and as Chrissie Gittins recently pointed out in the Guardian (Why is children’s poetry so invisible?, 28/4/15), poetry for children has even less of a public profile. We are aware of the challenges facing us, but we hope that the Emma Press Children’s Anthologies will gain momentum as we publish more in the series and become something like Horrible Histories for poetry.’

The Story Museum in Oxford is hosting a launch event for the book on 18th June, featuring a discussion about writing poetry for children by John Fuller, Rachel Piercey and Andrew Wynn Owen. There will also be a launch party at Love & Scandal coffeehouse in London on 23rd June, and a reading from Andrew Wynn Owen and Kate Wakeling at Waterstones Oxford on 27th June. These events will be followed by a nationwide tour of readings and workshops running July-November 2015.

Full details of the events can be found here: http://theemmapress.com/events/