The Emma Press launches Anthology of Poems about Ageing

The Emma Press has published an anthology of poems about ageing, edited by Sarah Hesketh. The Emma Press Anthology of Age features new poems which take a close, hard look at old age, taking in the pain, humour, anger and fear associated with this universal state. 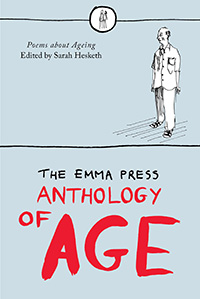 Hesketh was poet in residence with Age Concern in 2013 and has published a book of poems inspired by her visits to a residential care home for people with dementia: The Hard Word Box (Penned in the Margins, 2014). The Emma Press Anthology of Age continues her exploration of the realities of ageing, bringing together poems which touch on all aspects of old age and push towards the idea of acceptance.

The publisher, Emma Wright, said: ‘Sarah has assembled a fantastic collection of poems. It’s tender and brutal and astonishingly honest, full of poems which leave you reeling at the end.’

Hesketh said: ‘I had a feeling that there would be a strong interest in the subject, that perhaps there weren’t so many outlets for writing about a topic which affects so many of us, in so many different ways. But I don’t think either Emma or I had anticipated the volume of submissions that we would receive, nor how oddly wonderful it would be to see so many people wanting to articulate the same worries and the same experiences.’

The launch party is at the Star of Kings pub in King’s Cross, London, on Tuesday 6th October.