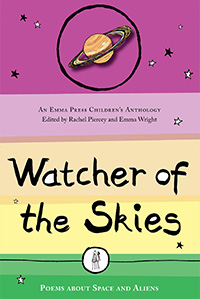 The Emma Press is launching their second anthology of poems for children aged 8+ on 1st October 2016. Watcher of the Skies: Poems about Space and Aliens is edited by Rachel Piercey and Emma Wright and features poems from established poets such as Mandy Coe, Inua Ellams and Cheryl Moskowitz, as well as newer poets such as Sohini Basak and Mary Anne Clark.

The book is fully illustrated by Emma Wright and the poems are accompanied with helpful facts from space scientist Rachel Cochrane (Institute for Astronomy, University of Edinburgh) and ideas for writing poems by Rachel Piercey (Newdigate Prize, 2008). The title is a reference to John Keats’s poem ‘On First Looking into Chapman’s Homer’:

‘Then felt I like some watcher of the skies
When a new planet swims into his ken;’

Publisher Emma Wright said: ‘We couldn’t be prouder of this collection. There’s a real mix of styles and approaches to the theme, and the poems are united by their shared sense of wonder at the universe. It’s been fantastic working with Rachel Cochrane from the Institute for Astronomy on the notes, too, bringing yet another layer of wonder to the book.’

Watcher of the Skies is the second in the Emma Press’s new series of poetry books for children. The first, Falling Out of the Sky: Poems about Myths and Monsters, was accompanied by a well-received national tour, supported by Arts Council England, and shortlisted in the Centre for Literacy in Primary Education’s 2016 CLiPPA children’s poetry book awards.

The publisher is throwing a family-friendly launch party at Blackwell’s Holborn on Saturday 1st October, as well as running events at Stratford-upon-Avon Poetry Festival (25th September) and in Birmingham (6th October). Details can be found on their website.