To celebrate the publication of their fiftieth book in five years, Jewellery Quarter-based publisher the Emma Press is throwing a birthday party. The business has grown from humble origins – in 2012, production assistant Emma Wright quit her job with a large trade publisher in London to start her own publishing business.

Five years later, the publishing house is more than fulfilling its slogan ‘Small press, big dreams’ as one of the most successful independent presses in the country. Wright has racked up accolades, including the CLiPPA award for children’s poetry, the 2016 Michael Marks Award for poetry pamphlet publishing, and a coveted spot on the Guardian’s top ten list of ‘Books Every Child Should Read.’ 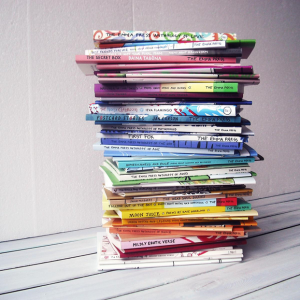 Publisher Emma Wright credits moving to the Midlands two and a half years ago as a major factor in the development of the Emma Press brand. The move has seen the Press develop from a sole trader operation to a publishing powerhouse, employing five freelance editors and production staff. Wright recalls struggling to get her first book, Rachel Piercey’s slim pamphlet The Flower and the Plough, stocked in the shop at Reading Museum; today she gives talks at universities and book fairs, and works with authors in translation from Latvia, Estonia, and as far afield as Japan and New Zealand.

‘If I hadn’t moved to Birmingham, I might not still be going today,’ Wright commented. ‘When I left my job in London, it was a big gamble – I didn’t know if I could even pay my rent as a woman single-handedly running an independent poetry business.’ The city has more than repaid her investment, however. Since 2015, Wright has teamed up on major local projects, including the Verve Festival of Poetry and Spoken World – held in Waterstones every February – for which she published the This Is Not Your Final Form, – an anthology of poems about Birmingham – and a collaboration with JQ watering hole 1000 Trades to produce a collection of essays about our city’s future.

Waterstones manager Stuart Bartholomew said: ‘Local presses like Emma’s are the lifeblood of our city’s literary culture – five years of publishing is a huge achievement and the Verve team will be there with party hats galore!’

1000 Trades co-owner Jonathan Todd added: ‘The Emma Press is an example of what happens when our city invests in creativity. As a fellow independent business, we’re thrilled to see how much her projects have grown and developed since she decided to call the Jewellery Quarter home.’

The big anniversary will be marked at 1000 Trades on Saturday 17th March with an extravaganza of readings and games. Poets featured in the recent Emma Press Anthology of Love will be sharing heartfelt verses, and the publisher has promised special guests – and even an element of theatre.

‘The Emma Press started out as a one-woman show,’ said Wright, ‘and for this special occasion I’m going to bring it back to its origins. I’ll be telling the story of my journey with jokes, anecdotes, and embarrassing secrets of what really goes on behind the scenes at E.P. Towers.’

All are welcome to help Emma and her team celebrate the big oh-five.