Birmingham-based publisher Emma Press has been shortlisted for the Michael Marks Publishers’ Award 2018. They previously won the award in 2016 and this is the fourth time that they have been shortlisted.

The Emma Press also have two pamphlets shortlisted for the Michael Marks Poetry Award: Bezdelki by Carol Rumens and Paisley by Rakhshan Rizwan. They had also entered two other pamphlets for this award: Birmingham Jazz Incarnation by Simon Turner and Now You Can Look by Julia Bird.

The Michael Marks Awards were established in 2009 by the Wordsworth Trust and the British Library with the support of the Michael Marks Charitable Trust, ‘designed to raise the profile of poetry pamphlets, recognising the enormous contribution that they make to the poetry world.’ The judges for the Poetry and Publishers’ Awards this year are Sasha Dugdale, Rachel Foss, and Declan Ryan.

Paisley is Rakshan Rizwan’s debut pamphlet and explores themes of womanhood, class, linguistic and cultural identity in the context of South Asia. The judges were ‘impressed with Rizwan’s control; sometimes that was expressed in her formal control over the prose poem or ghazal, but throughout there was an impressive tonal sharpness, [and] a fascinatingly laconic voice.’

Carol Rumens’ Bezdelki is a collection of elegies for a late partner, featuring translations and imitations of Osip Mandelstam alongside fragments of Egyptian mythology. The judges commended the author on ‘stitching together a chorus of voices in service of mourning and not-quite widowhood. ‘Bezdelki’ translates as ‘little things’, and this pamphlet is full of the resonant objects of a life.’

The judges also said of the publisher’s nomination: ‘The Emma Press won the Publisher’s Award in 2016 and is shortlisted again this year with a varied offering of four pamphlets, of which two – Rakhshan Rizwan’s debut, Paisley, and Carol Rumens’s Bezdelki – have been shortlisted for the Poetry Award and attest to the Emma Press’s versatility and commitment to accommodating authors at different career stages. We admired their commitment both to aesthetic and political diversity as well as their inclusive and nurturing ethos, manifest in all aspects of their work from careful mentoring to characterful design.’ 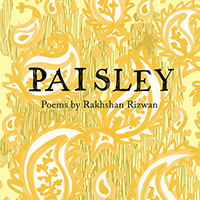