Award-winning Birmingham publisher the Emma Press is launching The Adventures
of Na Willa at the London Book Fair 2019.

Authored by celebrated Indonesian writer and musician Reda Gaudiamo, the book is a collection of 34 short stories, full of the curious adventures and musings of a bright young girl growing up in Indonesia within a multicultural family. It features the original charming black-line illustrations by Cecillia Hidayat and offers a touch of nostalgia that will appeal to children and adults alike. 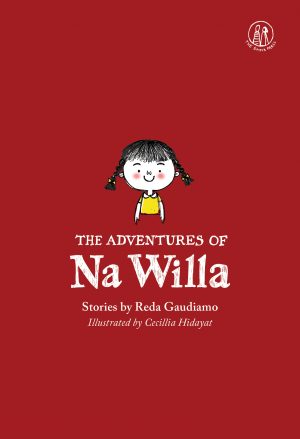 First published by Aikon in 2012 and then reissued by POST Press in 2018, The Adventures of Na Willa was translated by Ikhda Ayuning Maharsi Degoul and Kate Wakeling. The book will be presented at the London Book Fair as part of this year’s Indonesia Market Focus.

The translation was made possible after the Emma Press were awarded a LitRi translation grant for the translation of three Indonesian titles into English. They were the only UK trade publisher to be awarded funding from the program last year. The publication of the book was also supported by public funding from the National Lottery through Arts Council England. The Emma Press acquired World English rights for two other titles in Gaudiamo’s Na Willa series: Na Willa and the House in the Alley and Aku, Meps and Beps, which will be published in 2020.

Ikhda Ayuning Maharsi Degoul, co-translator, says: ‘Reda Gaudiamo has vividly evoked Indonesian culture by creating the most friendly and accessible characters, places, and situations. With religious and ethnic issues as important as they are in Indonesia, I would also note that The Adventures of Na Willa is a book about empathy; it demonstrates a way of living harmoniously amidst all the differences.’

Emma Wright, publisher, says: ‘It is a privilege to be bringing The Adventures of Na Willa to a UK audience. The tales of Na Willa and her friends have been delighting children in Indonesia for over 6 years now, and it’s exciting to think of all the new readers who will now get to share in Na Willa’s world.’

Reda Gaudiamo is an author from Jakarta and has previously worked as a copywriter, journalist, and publisher. She studied French Literature at the University of Indonesia and writes literature for adults and children, focusing on short story collections. She is also known for writing and performing poetry-inspired ballads.

There will be a launch event for The Adventures of Na Willa on Thursday 14th March 2019 at the Indonesia Spice Café at the London Book Fair.

The Adventures of Na Willa