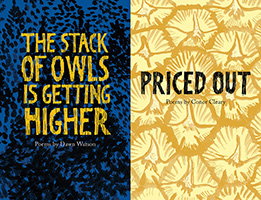 The Emma Press has announced the next two titles to join their award-winning poetry pamphlet list in 2019. These are: The Stack of Owls is Getting Higher, by Dawn Watson, and priced out, by Conor Cleary, both publishing on 6th June 2019. 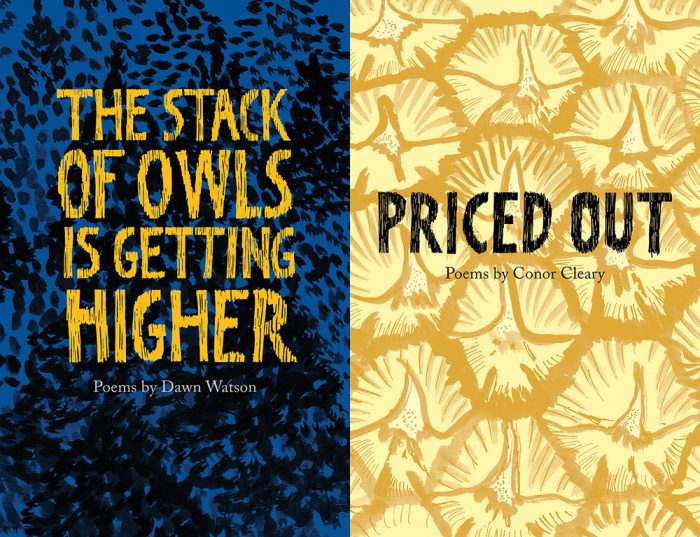 The Stack of Owls is Getting Higher features poems based on the writer’s time spent in Georgia, Tennessee and the Carolinas, interwoven with pieces set in the poet’s native Belfast which speak urgently to the raw realities of sexuality, juvenile detention, and the Irish border.

Editor Richard O’Brien said: ‘Alternately surreal and direct, and always joyously inventive, Watson offers a clear and unsettling vision of what is and isn’t there in these anxious, contemporary times.’

priced out features poems which map the contours of a world of goofy Vines, flat-pack Christmas trees, and the barely-suppressed terror of economic precarity. The centrepiece is a tender and wry sequence of sonnets which explores the 1990s economic bubble and its deflated aftermath.

Editor Richard O’Brien said: ‘In priced out, poem after poem reaffirms a commitment to human connection, working towards a calmly bemused acceptance of the dangers and wonders of contemporary existence.’

Both pamphlets are being released on 6th June 2019 and are available to pre-order (£6.50) in the Emma Press webshop.

There will be a launch event on 13th June at Belfast Book Festival, featuring readings from both poets. Book your tickets here.

Dawn Watson is a writer from Belfast. She is currently a PhD candidate at Queen’s University, writing a prose poem novel and researching prose poetics. She worked as a sub editor in newspapers such as The Sunday Times in London, The News of the World in Dublin and The Mirror in Belfast. She completed a Masters in Poetry at the Seamus Heaney Centre in 2018 after winning the Ruth West Poetry Scholarship. She was a 2018 Poetry Ireland Introductions Series poet and won the Doolin Writers’ Poetry Award in the same year. Her writing has been published in journals including The Manchester Review, Blackbox Manifold, The Stinging Fly, The Moth and The Tangerine. She lives in Belfast with her wife, and has a son, Art.

Pre-order The Stack of Owls is Getting Higher here.

Conor Cleary is from Tralee, Ireland and lives in Glasgow. He has an MA in Poetry from Queen’s University Belfast, where he was the recipient of the 2016 Seamus Heaney Centre MA Award. In 2018, he was the winner of the Patrick Kavanagh Award. His work has appeared in Poetry Ireland Review, The Tangerine, Virginia Quarterly Review and The Stinging Fly. This is his first poetry pamphlet. [Photo: Cleary’s Photography Tralee]