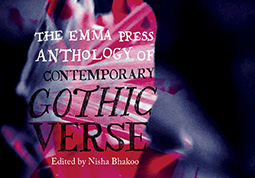 The Emma Press has published an anthology of gothic poetry, edited by Nisha Bhakoo. The book, published on 31st October 2019, features poems by contemporary poets including Angela Readman and Anna Kisby, and translations of poems by Spanish poet Sofía Rhei and Hungarian poet Lajos Szórádi.

The anthology was compiled from poems sourced in an open call for submissions launched towards the end of last year. 294 poets entered, of which 26 were chosen for the anthology.

Editor Nisha Bhakoo says in her introduction to the book: “My hope for this anthology was to showcase poems that pointed to the uncanniness of our present time, giving traditional gothic tropes a compelling, contemporary flavour. I not only wanted the poems to hold up a mirror to our post-postmodern age, but also to challenge the norms and unwritten rules of it.”

There will be a launch party for the book, with readings from the poets, in London on 29th November. More details and booking info here.

The Emma Press Anthology of Contemporary Gothic Verse is available to buy in the webshop, in print (£10) or ebook (£5.50).