The Emma Press Anthology of Age 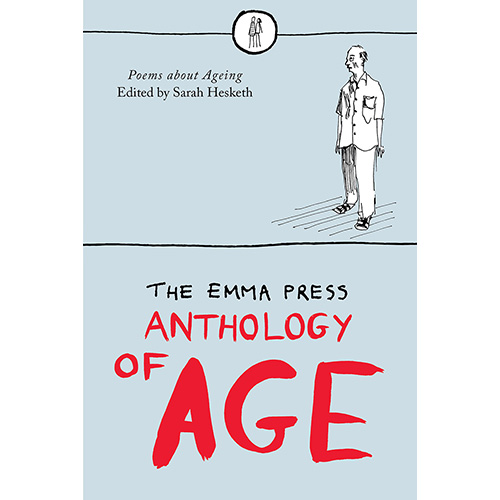 We’re all ageing, all of the time. As a society we’re getting even older, but we seldom seem to stop and think about the huge mental and physical changes that happen to us as we get old, or what it’s like to live as an old person. The Emma Press Anthology of Age is a collection of poems which challenge, celebrate and give age a voice, finding humour amidst the heartbreak and comfort within the pain.

‘[…] few collections are more entertaining, well-judged and thought-provoking than this neat set stylishly produced by the Emma Press. […] Clever sequencing and juxtaposition encourage in the reader a simple but profound sense of the inevitability of age as a shared experience without sadness as the dominant feeling. It has a spring in its step throughout. This is an anthology rich in resonance and new imagery, where just about every poem is succinct, accessible and assured in tone and purpose. ‘ – Mark Butler, DSDC

‘Age: something to embrace or to dread? Something natural and beautiful or a monster that slowly eats away at us? The Emma Press Anthology of Age attempts to answer that question – perhaps one of the most fundamental to humanity – with a quietly powerful set of poems from a diverse selection of writers. […] I found the Anthology of Age very poignant. There is breathing space, however, with loud, angry poems alternating in a neat rhythm with soft, peaceful murmurs. Many facets of age are covered, generally with dignity and respect.’ – Elizabeth Gibson, Cadaverine

‘The Emma Press Anthology of Age is not so much about the problems of being old as the whole process of ageing, which we are all doing, all the time. So it has a very broad sweep, and is not just aimed at the elderly, though I find the silver cover amusing. A good range of poets is represented, and the quirky illustrations by Emma Wright are a delight. The book is not divided into sections, but flows from one poem to another, giving a sense of unity and journey.’ – Angela Topping, Sabotage Reviews

‘There are angry poems, passive poems, sad poems and warming poems, sampling the many ways people view the aging process. […] Life is messy, bumpy and tough to understand or accept at times but what these poems do is illuminate and celebrate the collectivity behind these concerns.’ – Frances Kelly, DURA

Sarah Hesketh is a poet and freelance project manager. Her work has appeared in a number of magazines and anthologies, including The White Review, Soundings, Catechism: Poems for Pussy Riot and Other Countries: Contemporary Poets Rewiring History. Her books include Napoleon’s Travelling Bookshelf (Penned in the Margins, 2009), and The Hard Word Box (Penned in the Margins, 2014), a collection inspired by her time as poet in residence with Age Concern, working with people with dementia. In 2015, she was commissioned by the Holocaust Memorial Day Trust to write ‘Grains of Light’, a sequence inspired by the life of Holocaust survivor Eve Kugler.

Sophie F Baker has been published in magazines including Smiths Knoll, The Rialto, Poetry London and Magma. She has won an Andrew Waterhouse Award (New Writing North) and an Eric Gregory Award. She works at The Poetry Society and is a founding editor of poetry magazine Butcher’s Dog.

Aileen Ballantyne is the winner of both this year’s Mslexia Poetry Competition and the short poem category of the International Poetry on the Lake Prize. Aileen has a PhD in Creative writing and Modern Poetry from Edinburgh University, where she teaches contemporary poetry and English and Scottish Literature.

Clare Best is writer-in-residence at the University of Brighton. She is currently exploring mysterious water sources across the South of England with the painter Mary Anne Aytoun-Ellis for their project Springlines. Her first collection, Excisions, was shortlisted for the 2012 Seamus Heaney Centre Prize.

Julia Bird grew up in Gloucestershire and now lives in London, working for the Poetry School and as an independent live literature producer. She has published two collections with Salt: Hannah and the Monk (2008) and Twenty-Four Seven Blossom (2013). She is currently working on a poetic biography of a 1930s artist.

Sharon Black is originally from Glasgow but now lives in southern France. She has been published widely and won the Ilkley Literature Festival Poetry Competition in 2013. She has two collections: To Know Bedrock (Pindrop Press, 2011) and The Art Of Egg (Two Ravens Press, 2015).

Alison Brackenbury was born in 1953. Her eighth collection is Then (Carcanet, 2013). A new collection is due from Carcanet in Spring 2016. She has won an Eric Gregory and a Cholmondeley Award and broadcast on Radios 3 and 4. She lives in Gloucestershire, with grey hair and too many cats.

Jo Brandon was born in Essex and raised in rural Lincolnshire. She has one pamphlet, Phobia (Valley Press, 2012), and her first collection, The Learned Goose, is publishing in 2015. Her work has featured in various publications including The Poetry Review and Butcher’s Dog. Jo can be found online at www.jobrandon.com

Gavin Bryce is a filmmaker and writer based in Edinburgh. His short stories and poetry have been published in Popshot Magazine and by Mardibooks. He has also been shortlisted for the Bridport Award.

Jane Burn is an artist and writer based in north-east England. She is a member of many poetry groups and regularly performs guest spots. Her poems have found homes with a variety of magazines and express the minutiae of everyday life – loss, success, failure; fantastical thoughts, the joy and peace of nature.

Oliver Comins lives and works in West London. His pamphlet, Yes to Everything, was published by Templar in 2015. Other recent work has appeared in The Poetry Review, The North and The Rialto, as well as The Emma Press Anthology of Fatherhood (2014).

Nathan Curnow lives in Ballarat, Australia, and is a former editor of literary journal Going Down Swinging. His poetry features in Best Australian Poems 2008, 2010 and 2013 (Black Inc) and has won awards including the Josephine Ulrick Poetry Prize. His most recent collection, RADAR, is available through Walleah Press.

Isobel Dixon is the author of Weather Eye, A Fold in the Map and The Tempest Prognosticator and co-wrote and performed in The Debris Field. In 2016, Mariscat will publish her pamphlet, The Leonids, and Nine Arches will publish her new collection, Bearings.

Robert Hamberger has been awarded a Hawthornden Fellowship and shortlisted for a Forward prize. He has published six pamphlets. His full-length collections are Warpaint Angel (Blackwater Press, 1997), The Smug Bridegroom (Five Leaves, 2002) and Torso (Redbeck Press, 2007). His fourth collection, Blue Wallpaper, is forthcoming from Waterloo Press.

Rachel Heimowitz is the author of one chapbook, What the Light Reveals (Tebot Bach Press, 2014). Her work has been nominated for The Pushcart Prize and she is currently the editor of arc-24, the literary journal of The Israel Association of Writers in English. www.rachelheimowitz.com.

Hilaire has published short stories and poetry in British and Australian magazines and several anthologies. Triptych Poets 1 (Blemish Books, 2010) featured a selection of her poems. She is working on a poetry collection with Joolz Sparkes, London Undercurrents, unearthing women’s voices north and south of the river.

Lynn Hoffman was born in Brooklyn and lives in Philadelphia. He is the author of The Short Course in Beer, leads wine and beer tastings, and enjoys loafing and fishing. His cancer comedy memoir, Radiation Days, was published in 2014.

Sandra Horn is an award-winning children’s author. Her poems have been commissioned by BBC Active for their schools’ history programmes and have been published in two anthologies: Lines in the Sand (Frances Lincoln, 2003) and Born to Giggle (Save the Children, 2012).

Emma-Jane Hughes was brought up between the sublime of a river barge and the ridiculous of boarding school. She has been published in two Bridport anthologies, online by Mslexia, and in other anthologies. Emma is researching and teaching at the University of Chichester, and remains indebted to the lecturers there.

Russell Jones is an Edinburgh-based writer. He has published three poetry collections, with a fourth due out in September 2015. He is the editor of Where Rockets Burn Through: Contemporary Science Fiction Poems from the UK and has a PhD in Creative Writing from The University of Edinburgh.

Melinda Kallasmae’s poems have most recently been published in books including Best Australian Poems 2014, The Stars Like Sand: Australian Speculative Poetry, and The Emma Press Anthology of Motherhood – as well as in literary journals including Cordite Poetry Review and Tamba.

Anja Konig grew up in the German language and now writes in English. Her first pamphlet, Advice for an Only Child, was published by Flipped Eye in 2014. Its advantages are 1) It is very cheap, and 2) It is very short.

Joan Lennon lives in Fife. By day she is a novelist and short story writer, but by night she’s all poet. Her first pamphlet, Her Lines, My Lines, was commissioned by Bookmark Book Festival in 2014 and illustrated by the wildly talented Kyla Tomlinson.

Harry Man was born in 1982. His work has appeared in The Battersea Review, Coin Opera 2: Dr Fulminare’s Revenge among other places. His first pamphlet, Lift, won the UNESCO Bridges of Struga Award.

Amy McCauley’s poetry has been published widely in UK magazines and anthologies. Her current project is a collection of poems (Auto-Oedipa) which re-imagines the Oedipus myth. She lives in Aberystwyth and is poetry submissions editor for New Welsh Review.

Bridget McKenzie is a researcher, writer and photographer. In 2006, she founded the cultural learning company, Flow, with bases in London and India. Previously, she has managed learning services at the British Library and Tate. She is married to artist Brian McKenzie and has a very creative teenaged daughter.

Rob Miles lives in Yorkshire. His poetry has been published widely and he has won several prizes, including the 2014 Philip Larkin, judged by Don Paterson. Other poems have been placed, commended or shortlisted in competitions including the Bridport Prize, Live Canon and the National Poetry Competition.

Cheryl Moskowitz is a US born, UK based prize-winning poet, translator and novelist. Her poems are published widely in journals including The Poetry Review, Magma, and Artemis. Her books include Wyoming Trail (Granta), Can it Be About Me (Frances Lincoln) and The Girl is Smiling (Circle Time Press).

Doireann Ní Ghríofa is an award-winning bilingual poet based in Ireland. She was recently awarded the Ireland Chair of Poetry Bursary by Paula Meehan. Two of her poems are currently Pushcart Prize nominated. A first collection of poems in English is forthcoming from Dedalus Press.

Susan Taylor lives on Dartmoor. Her most recent full collections are The Suspension of the Moon and A Small Wave for your Form, both from Oversteps Books. She co-edits the poetry journal South West and The Broadsheet and runs the Café Culture series of spoken word and music events in Thrive Café, Totnes.

Edward Venning recently spent several years in experimental collaborations with poets at the Poetry School, concluding in the exhilarating performance theatre piece, Bloomsound. Winner in 2013 of the Seatonian Poetry Prize, his work has also appeared in Brittle Star and The Other Poetry.