The Emma Press Anthology of Aunts 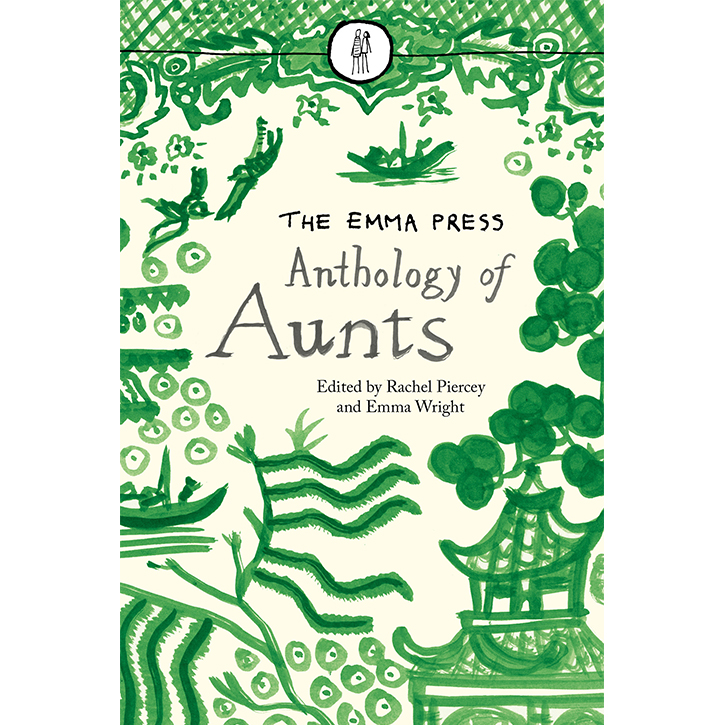 The Emma Press Anthology of Aunts explores what it means to be – and feels like to have – an aunt, historically and today. Some aunts are biological, some are chosen, but all have an impact on the way we learn to move through the world.

‘This marvellous collection featuring some striking voices and unique perspectives is a thoroughly recommended read for anyone looking to celebrate their aunts today or any other. Aunts, we salute you.’ – Literature Works

‘Though slim, the anthology ranges around the various territory of aunthood, so there is a lot for anyone who thinks about women’s roles in the family.’ – Laura Cooper, Cuckoo Review

J V Birch lives in Adelaide. Her poems have appeared in anthologies, journals and magazines across Australia, the UK, Canada and the US. She has two collections – Smashed glass at midnight and What the water & moon gave me – published by Ginninderra Press. She blogs at www.jvbirch.com

Lily Blacksell is a British writer living in New York, where she’s working towards a poetry MFA at Columbia University. Her work has appeared in Impakter, Poet’s Country, Foothill and Magma. She has written for Boston Review, Sabotage and Prac Crit. In 2016, Lily was nominated for a Pushcart Prize.

Stephen Bone’s work has appeared in magazines and anthologies in the UK and the US. His first collection, In The Cinema, was published by Playdead Press in 2014. He has a pamphlet, Plainsong, due out with Indigo Dreams in 2017.

Carole Bromley lives in York. She has two collections with Smith/Doorstop: A Guided Tour of the Ice House and The Stonegate Devil, which won the 2016 York Culture Award. Her collection for children, Blast Off!, will be published in June 2017.

Kayo Chingonyi is a fellow of the Complete Works programme for diversity and quality in British poetry and the author of two pamphlets, Some Bright Elegance (Salt, 2012) and The Color of James Brown’s Scream (Akashic, 2016). His first full-length collection, Kumukanda, is forthcoming from Chatto & Windus.

Tracy Davidson writes poetry and flash fiction. Her work has appeared in various publications and anthologies, including Mslexia, Modern Haiku, A Hundred Gourds, Journey to Crone, The Binnacle, The Great Gatsby Anthology and In Protest: 150 Poems for Human Rights.

Brian Docherty lived in North London for many years before moving to East Sussex, where he is part of a growing community of writers, musicians and artists. His books include Woke Up This Morning (Smokestack Books, 2012) and Independence Day (Penniless Press, 2015).

Charlotte Eichler lives in West Yorkshire and works as an editor and medievalist. Her poems have appeared in magazines and anthologies including Agenda, The Rialto and The Best New British and Irish Poets (Eyewear, 2017). She was commended in the 2016 Battered Moons competition.

Amy Evans is the author of The Report of the Iraq Enquiry: Poetic Summary (ff press, 2017), the broadside Stalking Gerard Manley Hopkins (Salient Seedling/Woodland Pattern, 2016) and a third pamphlet CONT. (Shearsman, 2015). She performed her installation SOUND((ING))S at the ICA in 2016. She teaches at the University of Kent.

Matthew Haigh lives in Cardiff. His poems have appeared in a number of magazines and anthologies, including the children’s poetry anthology Falling Out of the Sky: Poems about Myths and Monsters (Emma Press, 2015). He has work forthcoming in Aquanauts, a Sidekick Books anthology of visual/concrete poetry inspired by water.

Robert Hamberger has been shortlisted for a Forward prize, awarded a Hawthornden Fellowship and featured as the Guardian’s Poem of the Week. He has published six pamphlets and three full-length collections, including Torso (Redbeck, 2007). He lives in Brighton.

Jan Heritage has had poems published in several magazines and publications, including Magma, Brittle Star, Aesthetica and three other Emma Press anthologies. She has completed the Royal Holloway MA in Creative Writing and currently lives and works in Brighton.

Hilaire was poet-in-residence at Thrive Battersea for Open Garden Squares Weekend 2016. Her poems and short stories have been published in several anthologies and various magazines, including Brittle Star, Under the Radar and ARTEMISpoetry. Her novel Hearts on Ice was published by Serpent’s Tail in 2000.

Kathleen Jones’ first collection, Not Saying Goodbye at Gate 21, won the Straid Award. Her recent pamphlet, Mapping Emily, won the 2016 Templar Iota Shots award. Her second collection, The Rainmaker’s Wife, is due out with Indigo Dreams in 2017. Kathleen is a novelist and biographer and a Royal Literary Fund Fellow.

Angela Kirby was born in Lancashire but now lives in London, having spent a lot of time in France, Spain and the US. Her poems have won prizes and commendations in several major competitions. Shoestring Press published her last four collections and she is now working on her fifth.

Gill Learner grew up in Birmingham but now lives in Reading. She has won a number of prizes, including the Poetry Society’s Hamish Canham Award, and been published in many magazines and anthologies. Her collections, The Agister’s Experiment (2011) and Chill Factor (2016), are published by Two Rivers Press.

Rachel Long is a poet, curator and facilitator. She is an alumna of the Jerwood/Arvon Mentorship scheme and is currently assistant tutor to Jacob Sam-La Rose on the Barbican Young Poets programme. She is the leader of Octavia, a poetry collective for women of colour at Southbank Centre, London.

Gill McEvoy has had two collections published with Cinnamon Press and three pamphlets with HappenStance, the second of which, The First Telling, won the Michael Marks Award in 2015. She runs a poetry reading group, a Poetry Breakfast and a workshop group in her home town.

David McKelvie makes maps in Glasgow, lives in Greenock and writes mainly for himself aged twelve. His poems have appeared occasionally in a handful of publications.

Mia grew up in the hills and forests of mid Wales. Her poetry has appeared widely on postcards to friends, letters to lovers and on the backs of lavatory doors. She has previously been published in an anthology of poems when she was twelve years old.

Joan Michelson’s recent publications include a second full collection, Landing Stage (Sentinel Books, 2017), which examines refugees and immigrants, and a chapbook, Bloomvale Home (Original Plus Books, 2016), which examines residents in a care home. ‘Aunt Syl’ is from The Family Kitchen, a work in progress.

Isabel S. Miles lives, writes and walks in the North Yorkshire Moors. She has published work in WTD, The View from Here, Ink, Sweat and Tears, Shooter, Grey Sparrow Journal and Toasted Cheese. One of her poems was shortlisted for the 2015 Keats-Shelley prize.  She is currently working on a novel.

Winifred Mok is an actress and filmmaker (Kin: Fallen Star) with a passion for stories, books and site-specific theatre. She studied English Literature and Theatre Arts at the University of Birmingham. Her projects and poems explore the spaces of language, culture and identity.

Margot Myers, aunt and great-aunt, lives in Oxford. She has been placed or commended in several poetry competitions and shortlisted for the Bridport Flash Fiction prize. She has poems in The Emma Press Anthology of Dance (2015) and Urban Myths and Legends (Emma Press, 2016).

After retiring from her New York law practice, Anita  S. Pulier served as a US representative for the Women’s International League for Peace and Freedom at the United Nations. Her chapbooks Perfect Diet, The Lovely Mundane and Sounds of Morning are published by Finishing Line Press.

Kim M. Russell is a retired teacher. She has lived in North Norfolk for twenty-five years, where she is inspired by the coast, big skies, her cats and her wild garden. She writes poetry every day, from haiku and tanka to sonnets and villanelles.

Elisabeth Sennitt Clough lives in Norfolk with her husband and three children. Her pamphlet Glass was a winner in the inaugural Paper Swans pamphlet competition and has been shortlisted for Best Poetry Pamphlet in the 2017 Saboteur Awards.Her debut collection Sightings was published by Pindrop Press.

Ruthie Starling is a Shropshire-based poet and artist. She writes about nature, family and modern life. She has had work published in books and magazines and does regular readings. She is currently working on a novel, illustrating her children’s book and preparing her first poetry collection.

As a child in Scunthorpe, Rob Walton had many lovely aunts. He now lives on Tyneside. He has been published by the Emma Press, Frances Lincoln, Butcher’s Dog, IRON Press, Arachne and others. With sculptor Russ Coleman, he created the New Hartley Memorial Pathway and Concrete 64 for Fountain17. Oddness at www.linesofdesire.co.uk

Kate White lives in London and works part-time at the Poetry Society. Her pamphlet, The Old Madness, won the 2013 Poetry School/Pighog Press Pamphlet Prize and was a Poetry Book Society Pamphlet Choice.

Simon Williams was elected The Bard of Exeter in 2013 and founded the large-format magazine, The Broadsheet. Simon has seven published collections. His latest pamphlet, Spotting Capybaras in the Work of Marc Chagall, launched in April 2016 and his latest full collection, Inti, was published in July 2016.

Anna Woodford’s poetry collection Birdhouse (Salt, 2010) won the Crashaw Prize. She is poet-in-residence at York University’s CoMotion Centre and a Peer Reviewer for Creative Scotland. She has received a Leverhulme Award, a Gregory Award and has a doctorate in the poetry of Sharon Olds. www.annawoodford.co.uk