or, Playing the Changes by Simon Turner

With illustrations by Mark Andrew Webber 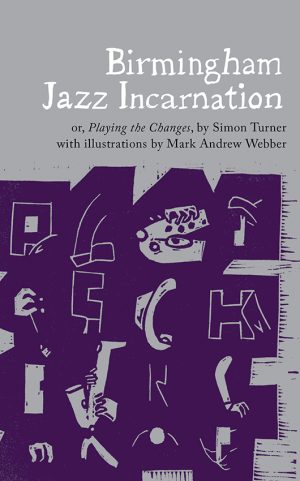 A man walks into a Birmingham bookshop, buys a volume of poetry, and steps out into the road, where a jazz musician seems momentarily to bring the whole city together. In the second poem in Playing the Changes, the same thing happens, only half the words are redacted. Then the experience is retold as a Petrarchan sonnet; a children’s skipping rhyme; an Acknowledgements page; a pastiche of Tristram Shandy…

Drawing on the traditions of jazz improvisation and Oulipo, a literary movement where writing arises from extreme formal restriction, Playing the Changes sees Simon Turner decomposing and recomposing one of his own poems in a variety of forms and styles. The result is a hymn to the pleasures of music, reading, writing, and city life, humming with a joyous experimental energy. In Turner’s linguistic hall of mirrors, the English language is always at serious, delirious play.

Simon Turner was born in Birmingham in 1980. His second full collection, Difficult Second Album, was published by Nine Arches Press in 2010 and a collaborative poem written with the performance poet Polarbear (aka Steve Camden) is on public display as part of the Spiceal Street development in Birmingham city centre. He is a co-editor of the recently-resuscitated Gists and Piths, a literary blogzine focusing on contemporary poetry. He lives and works in Warwickshire.