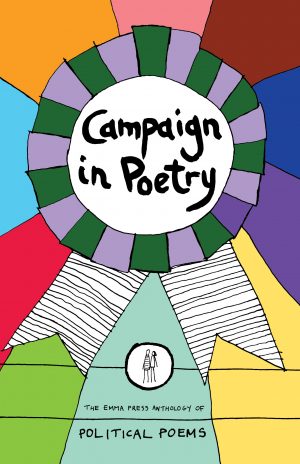 Campaign in Poetry is a powerful anthology about political and social issues in the UK, with poems written by contemporary poets in the months leading up to the UK General Election. The poems reflect current concerns and developing events in this country as well as more global trends, including nationalism, climate change, immigration, political apathy amongst voters and arts funding. This anthology is a statement against disaffection, providing a fresh perspective on the political landscape of the UK.

‘Strikingly, the poems in Campaign in Poetry are as much about contesting lack of concern about democracy as about the people, the individuals who are the units of the democracy. […] Another point of satisfaction, in reading this collection, is that there is a good balance of poems written in response to key events of the past years, and poems about people and politics on more allegorical levels.’ – Sohini Basak for Sabotage Reviews

‘This particular anthology has been carefully and skilfully selected, and, as well as alerting the reader to a crop of up-and-coming and established poets, provides a state-of-the nation snapshot on the eve of a very uncertain election.’ – Greg Freeman for Write Out Loud

‘The stand-out piece in the collection is ‘Hamelin’ from Clare Pollard. The poem is a speech from a politician in the rat-infested town, calling for an extension of power for the catcher to help protect the town’s children. It is an excellent piece of satire that perfectly tears apart current political rhetoric which promotes division: between the rich and poor, old and young, those in work and the unemployed, or British born and immigrants.’ – Niall Norbury for Alt Reading

Mona Arshi worked as a Human rights lawyer for a decade before she received a Masters in Creative Writing from the University of East Anglia and won the inaugural Magma Poetry competition in 2011. Her debut collection, Small Hands, will be published by Pavilion Poetry (part of Liverpool University Press) in Spring 2015.

Stephanie Arsoska has had work published by the Emma Press, Prole, Iron Press, Mother’s Milk Books, Magma, Ink, Sweat & Tears and Nutshells & Nuggets. She was a finalist in the Stanza digital slam and featured on the IndieFeed Spoken Word podcast. She runs a Virtual Open Mic Night on her website stephaniearsoska.co.uk.

Elizabeth Barrett’s most recent collection is A Dart of Green and Blue (Arc, 2010). She has a PhD in Political Science and lives in Sheffield, where she works as university lecturer in eduation. She sometimes receives Nick Clegg’s post, as her house is next to his consitituency office.

Kayo Chingonyi was born in Zambia in 1987, moving to the UK in 1993. He holds a BA in English Literature from The University of Sheffield and an MA in Creative Writing from Royal Holloway, University of London and works as a writer, events producer, and creative writing tutor.

Ellie Danak has a background in researching Swedish crime novels. Her work has been published in anthologies by the Emma Press and Paper Swans Press and on a number of poetry websites. Most recently, she won 3rd prize in the Exiled Writers Ink Poetry Competition.

Dai George’s first collection, The Claims Office, was published in 2013 by Seren. His poetry has appeared in journals and anthologies including Poetry Review, Poetry Wales and Best British Poetry. He is an editor at Prac Crit.

Jan Heritage has recently completed the Royal Holloway MA in Creative Writing and has had poems published in several magazines. Back in the day she was Faber’s Promotions Manager. Now she teaches yoga in Brighton.

Luke Kennard is a poet and writer of fiction. He won an Eric Gregory Award in 2005 and his second collection, The Harbour Beyond the Movie (Salt, 2007), was shortlisted for the Forward Prize for Best Collection. In 2014 he was named one of the Next Generation Poets by the Poetry Book Society.

Anna Kisby is an archivist living in Brighton, UK. Her poems have been placed in competitions and published in magazines and anthologies including Magma, Mslexia, Poetry News, Ink Sweat & Tears and The Emma Press Anthology of Motherhood. She won The New Writer magazine’s single poem prize in 2011.

Rachel Long was shortlisted for Young Poet Laureate for London 2014 and Highly Commended in the 2014 PBS National Student Competition. Her poems have been published in two other Emma Press anthologies and are forthcoming in Magma. She is studying an MA in Creative & Life Writing at Goldsmith’s University.

Rosie Miles lives in Birmingham, where her poem ‘You enter’ is etched into King’s Heath Village Square. Her debut pamphlet Cuts is coming out with HappenStance in 2015. She has been published in The North, Under the Radar, The Rialto and Artemis, and in 2011 she created an exciting project with artists who responded to her poems.

Richard O’Brien’s second pamphlet, The Emmores, was published by the Emma Press in January 2014; A Bloody Mess followed from Valley Press later that year. His work has featured in Poetry London, The Salt Book of Younger Poets and The Best British Poetry 2013. He is working on a PhD in contemporary verse drama and runs a close-reading poetry website called The Scallop-Shell.

Clare Pollard’s latest collection, Changeling, was a Poetry Book Society Recommendation. She is currently touring a one-woman show of her translation of Ovid’s Heroines.

Jon Stone’s collection, School of Forgery (Salt, 2012) was a Poetry Book Society recommendation, and he won the Poetry London competition in 2014. He is a co-editor of Sidekick Books, publishers of experimental collaborative books of poetry and illustration.

James Trevelyan grew up in the Midlands and lives in London. His poems about British seaside towns and 1980s action movies among other things have been published in a number of magazines and anthologies. He is an Arts Administrator and Poetry Reviews Editor at the Cadaverine.

Kate Wise lives in London, fitting poetry in around being a mum to two under-fours. She has been published by New Trad Journal, Angle, Prole and StepAway magazines. She was commended in the 2013 Cafe Writers and 2014 Manchester Cathedral Poetry Competitions, and placed third in the 2014 Ware Poets competition.