Falling Out of the Sky: Poems about Myths and Monsters 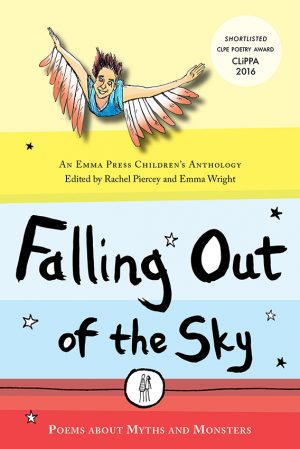 Falling Out Of The Sky is a treasury of poems which retell classic myths, legends and fairytales from across the world. Hansel and Gretel’s witch takes us behind the scenes of the construction of her gingerbread cottage, and Medusa explains how the snakes on her head rule out a lot of options in everyday life – wearing a hat, for example.

Full of alternate viewpoints and spirited new versions of old stories, Falling Out The Sky is a friendly introduction to poetry as well as the joy of literature. In tales about the beginning of time to the end of the world, poets and characters speak directly to the readers, reveling in the possibilities of storytelling. These are poems which parents can read aloud to younger children, and which older children can read to themselves, delighting in the mischief and invention of the poets.

In July-November 2015 we ran a tour of children’s poetry readings and workshops featuring poets from this book. Read more about the Myths and Monsters tour.

‘An exciting collection that challenges in a way few anthologies for children do.’ – 2016 CLiPPA judges

John Canfield grew up in Cornwall and now lives in London. His poems have appeared in various magazines and anthologies and he works for The Poetry School.

Mary Anne Clark studies English at Merton College, Oxford. She has been a prizewinner in the Poetry Society’s Foyle Young Poets of the Year Award, Cape Farewell and Timothy Corsellis competitions, and her poems have been published in magazines (including ASH) and the 2014 PBS National Student Poetry Competition anthology.

Joseph Coelho is a performance poet and playwright. His plays for young people have been commended in playwriting competitions and performed at Theatre Royal York and the Pied Piper, Polka and Unicorn theatres. His debut poetry collection, Werewolf Club Rules!, was published by Frances Lincoln Children’s Books in 2014. joseph-coelho.com

Sarah Doyle is poet-in-residence at the Pre-Raphaelite Society. Her first collection, Dreaming Spheres: Poems of the Solar System (co-written with Allen Ashley), was published by PS Publishing in 2014. Sarah co-hosts the Rhyme and Rhythm Jazz-Poetry Club at Enfield’s Dugdale Theatre. http://www.sarahdoyle.co.uk/

Matt Goodfellow is a poetry-writing primary school teacher from Manchester. His poems have been published in anthologies and magazines worldwide. www.mattgoodfellow.yolasite.com

Matt Haigh lives and works in Cardiff. His poems have appeared in Poetry London, Poetry Wales, Magma and the Guardian. He has also contributed to the Sidekick Books anthology Coin Opera II: Fulminare’s Revenge, a book of poems inspired by computer games. https://matthewhaighpoetry.wordpress.com/

John Fuller is a poet, novelist and critic. Among his recent books for grown-ups are New Selected Poems 1983-2008 (Chatto, 2012) and a collection of prose poems, The Dice Cup (Chatto, 2014). His three collections of poems for children are Squeaking Crust (Chatto, 1974), Come Aboard and Sail Away (Salamander, 1983) and You’re Having Me On! (Laurel Books, 2014). www.johnfuller-poet.com

Anna Kisby is an archivist and mother of three children, and she lives in Brighton, UK. Her poems have been placed in competitions and published in magazines and anthologies including Magma, Mslexia, Poetry News and The Emma Press Anthology of Motherhood. She was the winner of The New Writer single poem prize in 2011.

Harry Man was born in 1982. His work has appeared in The Battersea Review and Coin Opera 2: Dr Fulminare’s Revenge among other places. His first pamphlet, Lift (tall-lighthouse, 2013), won the UNESCO Bridges of Struga Award. www.manmadebooks.co.uk

Amy McCauley’s poetry has appeared widely in UK magazines and anthologies. Her current project is a collection of poems, Auto-Oedipal, which re-imagines the Oedipus myth. Amy also writes plays and is the poetry editor for New Welsh Review.

Paul McMenemy is the editor of Lunar Poetry. This is his first poem for children.

Rachael M Nicholas was born in Birmingham in 1987. Her work has appeared in Magma, Gigantic Sequins and The Cadaverine. In 2012 she won an Eric Gregory Award. Her first pamphlet, Somewhere Near in the Dark, was published by Eyewear Publishing in 2014.

Richard O’Brien’s second pamphlet, The Emmores, was published by the Emma Press in January 2014 and A Bloody Mess followed from Valley Press later that year. His work has featured in Poetry London, The Salt Book of Younger Poets and The Best British Poetry 2013. He is working on a PhD in contemporary verse drama. http://thescallopshell.wordpress.com

Abigail Parry worked as a toymaker for several years, and has recently completed a PhD on play in contemporary poetry. She can most commonly be found writing about beguiling animals, unhappy monsters, magic and mischief. She received an Eric Gregory Award in 2010.

Jon Stone’s poems have appeared in books of sci-fi poetry, mimicry and formal adventures. He also writes manga mash-ups and odes to Batman villains, and has edited anthologies of bird poems and computer game poems, both published through Sidekick Books, which is run by the villainous alchemist Dr Fulminare. www.gojonstonego.com

Kate Wakeling lives in London and is a research fellow at Trinity Laban Conservatoire of Music & Dance. Her poetry has appeared in The Best British Poetry 2014, The Rialto and Butcher’s Dog magazines among others. She is writer-in-residence with Aurora Orchestra. https://twitter.com/WakelingKate

Kate Wise lives in London, fitting poetry in around being a mum to two under-fours. She has been published in New Trad Journal, Angle, Prole and StepAway magazines and was commended in the 2013 Cafe Writers and 2014 Manchester Cathedral Poetry Competitions, and placed third in the 2014 Ware Poets competition. https://twitter.com/kwise62

Andrew Wynn Owen studies English Literature at Magdalen College, Oxford. His first pamphlet, Raspberries for the Ferry, was published by the Emma Press in 2014. Also in 2014, he was awarded Oxford University’s Newdigate and Lord Alfred Douglas prizes for poetry.