In Transit: Poems of Travel 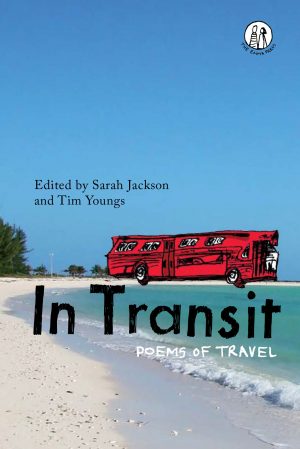 Travelling is never as just simple as getting from A to B. Whether you’re sailing in a stately cruise liner or running for a grimy commuter train, your mode of transport affects the way you look at the things around you. Travel can even make us question who we are at home: will we be the same person at the other end of the journey?

The poems in this anthology take in day-trippers and business travellers, but also characters who are forced to voyage against their will, as well as those with no choice but to stay put. Whatever your destination, this book is a companion for the journey, exploring the nuances of the strange state of being in transit.

Sarah Jackson is the author of Pelt (Bloodaxe, 2012), which won the Seamus Heaney Award and was longlisted for the Guardian First Book Award, and Tactile Poetics: Touch and Contemporary Writing (Edinburgh University Press, 2015). She is an AHRC Leadership Fellow, a BBC/AHRC New Generation Thinker and Senior Lecturer at Nottingham Trent University.

Tim Youngs is Professor of English at Nottingham Trent University and the author and editor of several books on travel writing. His poems have appeared in many magazines, including Magma, The Interpreter’s House, Poetry Salzburg Review and Stride. His debut pamphlet, Touching Distance, was published by Five Leaves in 2017.

Zayneb Allak has travelled and worked all over the world. At the time of going to press, she’s daydreaming about travels in Colombia. In her real life she’s a lecturer in Creative Writing at Edge Hill University. Her debut pamphlet, Keine Angst, was published by New Walk Editions in 2017.

Baiba Bičole, a prominent Latvian poet since the 1970s, was born in Latvia but left as a refugee during World War II and has lived in the United States since 1950. She is the author of six collections of poetry and has received major Latvian literary awards.

Sharon Black is originally from Glasgow but now lives in the Cévennes mountains of France, having previously lived in Japan after catching the travelling bug in her late teens. She has two collections: To Know Bedrock (Pindrop, 2011) and The Art of Egg (Two Ravens, 2015). www.sharonblack.co.uk

Jeanette Burton has an MA in Creative Writing from Nottingham Trent University and teaches English at a sixth-form College in Nottingham. This is her first published poem.

Nancy Campbell’s books include Disko Bay (shortlisted for the Forward Prize for Best First Collection 2016) and How To Say ‘I Love You’ In Greenlandic (winner of the Birgit Skiöld Award). Her memoir, The Library of Ice, will be published by Scribner in 2018. She is currently the Canal Laureate.

George David Clark’s collection Reveille won the 2015 Miller Williams Prize and his new work can be found in Agni, The Georgia Review, The Gettysburg Review, The Southern Review and elsewhere. He edits the journal 32 Poems and lives with his wife and their four young children in Washington, Pennsylvania.

Claire Collison is a writer, visual artist, breast cancer survivor and artist-in-residence at The Women’s Art Library. Her work has been published widely. She came second in the Resurgence Prize and second in the Hippocrates Prize. Claire performs a life modelling monologue, ‘Truth is Beauty’.

Anna Kisby lives in Devon, UK. Her poetry is widely published in magazines and anthologies, she won the BBC Proms Poetry competition 2016, and she was commended in the Faber New Poets Scheme 2015-16. Her debut pamphlet All the Naked Daughters is published by Against the Grain Press (2017).

Jo Dixon is a poet and critic living in Nottingham. Her poems have appeared in a range of poetry publications, including New Walk, The Interpreter’s House and Furies (For Books’ Sake). Her debut poetry pamphlet, A Woman in the Queue, was published by Melos Press in 2016.

Andy Eaton was born in California and raised throughout the United States. He lives in Belfast and teaches in Oxford. His poems are published widely in places such as Copper Nickel, Ploughshares and The Yale Review. A pamphlet, Sprung Nocturne, was published by the Lifeboat Press in 2016.

Charlotte Eichler’s poems have appeared in magazines such as Blackbox Manifold, PN Review, The Rialto and Stand. In 2017, Poetry London awarded Charlotte a year’s mentoring with Vahni Capildeo. Her first pamphlet, Their Lunar Language, is coming out with Valley Press in 2018.

Rosie Garland is a novelist, poet and singer with post-punk band The March Violets. With a passion for language nurtured by public libraries, her poems have appeared in Bare Fiction, New Welsh Review, The Rialto and elsewhere. She won the inaugural Mslexia Novel Competition.

Rebecca Gethin lives on Dartmoor and has published two pamphlets, two collections, and two novels. Her poems have been published widely, and she runs a Poetry School seminar in Plymouth. www.rebeccagethin.wordpress.com

Rich Goodson has been teaching migrant and refugee teenagers for the last twenty-one years. His debut, Mr Universe (Eyewear), was a Poetry Book Society Pamphlet Choice in 2017. www.richgoodson.com

Susannah Hart is a London-based poet whose work has been widely published in magazines and online. She is on the board of Magma Poetry and her first collection is due to be published by Live Canon in 2018. She’s also a keen traveller who loves learning different languages.

Fiona Larkin’s poems appear in journals and anthologies, including Magma, The North, Envoi and Under the Radar, and Best New British and Irish Poets 2018 (Eyewear). She has an MA in Creative Writing from Royal Holloway.

Shara Lessley is the author of Two-Headed Nightingale and The Explosive Expert’s Wife. A former Stegner Fellow at Stanford University, her awards include a National Endowment for the Arts Fellowship and Colgate University’s O’Connor Fellowship. She co-edited A Poem’s Country: Place & Poetic Practice.

Nick Littler is a poet and songwriter from Exeter, now living in Cardiff, where he is trying and failing to learn Welsh. His poem ‘Frank’ will appear in the forthcoming Emma Press anthology of poems about Britain.

Lila Matsumoto’s publications include Urn & Drum (Shearsman), Soft Troika (If a Leaf Falls Press) and Allegories from my Kitchen (Sad Press). She teaches poetry at the University of Nottingham and co-runs Front Horse, a magazine and performance night of poetry, music, and art.

Colleen J. McElroy lives in Seattle, Washington. Her collection Queen of the Ebony Isles won an American Book Award in 1985. Her collection Blood Memory was a finalist for the 2017 Paterson Poetry Prize. Many of her poems have been translated into languages including Russian, Italian, Arabic, and Serbo-Croatian.

Jane McKie’s most recent poetry collection is Kitsune (Cinnamon Press, 2015), and her most recent pamphlet is From the Wonder Book of Would You Believe It? (Mariscat Press, 2016). She is a Lecturer in Creative Writing at the University of Edinburgh.

Fiona Moore’s first collection The Distal Point will be published by HappenStance Press in July 2018. Her pamphlet Night Letter was shortlisted for the 2016 Michael Marks Awards. She is co-editing Magma 72 on climate change. She used to help edit The Rialto, blogs occasionally at Displacement, and writes reviews.

Miranda Peake is a poet and artist based in London. Her poems have been published in magazines and journals, including Ambit, Bare Fiction, Magma, The Moth, Oxford Poetry and The Rialto. In 2014 she won the Mslexia Poetry Competition. She is a member of the Hornet Press Poetry Collective.

Cheryl Pearson lives and writes in Manchester. Her poems have appeared or are forthcoming in publications including The Guardian, The High Window, Under The Radar and The Compass. She has twice been nominated for a Pushcart Prize. Her first full poetry collection, Oysterlight, was published in 2017.

Ilse Pedler lives and works as a veterinary surgeon in Saffron Walden. She often finds that poems come to her in the car between visits and ends up scribbling on bits of paper in lay-bys. Her pamphlet The Dogs That Chase Bicycle Wheels won the Mslexia Pamphlet Competition and was published by Seren in 2016.

Yvonne Reddick is a poet and ecopoetry scholar. She has received a Northern Writer’s Award (2016), the Mslexia Pamphlet Competition (2017), a Hawthornden Fellowship and the Poetry Society’s inaugural Peggy Poole Award (2018). Her pamphlet Translating Mountains (Seren 2017) was selected as a favourite pamphlet of the year in the Times Literary Supplement.

Andrea Robinson is an artist, writer and printmaker. Her work is inspired by handed-down histories (and her much-travelled ancestors). Recent poems have been published by Coast to Coast to Coast, Fair Acre Press, Smeuse, Visual Verse, and in a sound installation for Protein Dance. www.andrearobinsonartist.co.uk

William Roychowdhury works in international development. He is often in transit. He tries to fit poetry between his job and looking after his two young children. His work has been published in a variety of magazines.

Vicky Sparrow’s poems can be found in Front Horse, datableed and Litmus. Her first pamphlet, Notes to Selves (2016), is published by Zarf Editions. She is completing a PhD on the poet-activist Anna Mendelssohn at Birkbeck, and edits reviews for the Journal of British and Irish Innovative Poetry.

Andrew Taylor has published two collections with Shearsman and has pamphlets with Oystercatcher, Leafe, zimZalla, The Red Ceilings and Stranger Press. www.andrewtaylorpoetry.com

Maria Taylor is a poet and reviewer of Cypriot origin. Her most recent pamphlet, Instructions for Making Me, is published by HappenStance Press. Her debut collection, Melanchrini (Nine Arches Press), was shortlisted for the Michael Murphy Memorial Prize.

Alex Toms is a mum and trainee pharmacy advisor from Wivenhoe, Essex. Her poems have appeared in, among other places, Mslexia, Under the Radar and the Bloodaxe anthology Hallelujah for 50ft Women. Her debut collection will be published by Dunlin Press in late 2018. www.alextomspoet.com 87 86

Bitite Vinklers is a translator of Latvian folklore and contemporary literature, with work in numerous anthologies and journals, including The Paris Review, Denver Quarterly and Poetry Daily. Recent publications include Knuts Skujenieks, Seed in Snow: Poems (BOA Editions, 2016).

Rory Waterman is the author of Tonight the Summer’s Over (Carcanet, 2013), which was a Poetry Book Society Recommendation, and Sarajevo Roses (Carcanet, 2017), as well as two books on twentieth-century poetry. He is a senior lecturer in English, and co-edits the poetry pamphlet series New Walk Editions.

Rebecca Violet White is a poet who recently escaped London for a narrowboat in the West Country. Since finishing her Creative Writing Masters at UEA in 2014, she has been published by Ink, Sweat and Tears, For Book’s Sake and Elbow Room.

Simon Williams has eight published collections, his latest being a co-authored pamphlet with Susan Taylor, The Weather House, published in 2017 by Indigo Dreams. Simon was elected The Bard of Exeter in 2013 and founded the large-format magazine, The Broadsheet.

Jeremy Wikeley grew up in Romsey and now lives and works in London, but he used to get the train to Cambridge a lot. His poems, which have appeared in magazines like The North and Magma, often involve moving from one place to another.

Peter Surkov is a medical student and ex-marketeer. Recent poems have appeared in Magma, The Stockholm Review and Envoi.