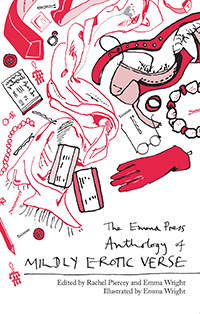 In twenty-three exquisite poems, nineteen poets from across the world celebrate the diversity and eccentricity of human sexuality with their stories of chance encounters and lingering memories. You can read a discussion of one of the poems, ‘Trickster’, over on Poem Club.

‘The joy in the anthology seems to be divided equally between finding the sublime in the ordinary, and the ordinary in the sublime. While “Hare” sees wonder in the “changeling” their lover becomes, and “The Frozen Man” conjures up a “white-blue beauty” with a poem almost like a magic spell or incantation, images created “At the cusp of the year in absolute dark”,  “Magician’s Assistant” by Richard O’Brien finds magic and sensuality in tawdry hotels and discarded sequins.’ – Alex Campbell, Sabotage Reviews

‘My favourite piece from the anthology is Amy Key’s ‘Tight Dress’ which details the thoughts that can pass through your head during a hook-up (Is my bed made? Who undresses first?). It’s a beautiful way of showing how self-conscious we can become doing something that should come naturally and I keep finding myself reading it over-and-over because the imagery is so distinct. ‘ – Megan McGill, Hepburn’s Pixie Crop

Julia Bird grew up in Gloucestershire and now lives in London. She works part-time for the Poetry School, and produces touring live literature shows as a freelancer. Her first collection Hannah and the Monk was published by Salt in 2008, and her second Twenty-Four Seven Blossom was published in Autumn 2013.

Mel Denham lives in the literature-loving city of Melbourne. She’s had a lifelong love affair with poetry, but has only recently begun writing it. She is working on a collection of poems about her other love, the postal system. Brief musings on this and other ephemera can be found at meldenham.com.

Joy Donnell is a writer, producer and former publicist living in Los Angeles by way of Georgia. Her work is published or forthcoming in anthologies printed by Beacon Press, Random House, St. Martin’s Press and Alyson Books. She can be found online at www.twitter.com/doitinpublic.

Kirsten Irving co-runs Sidekick Books with Jon Stone and her own poetry has been published by Happenstance and Salt. She normally writes a lot about robots. And schoolgirls too. And sometimes cannibals. Sexy robot schoolgirl cannibals.

Amy Key was born in Dover and grew up in Kent and the North East. She now lives and works in London. She co-edits the online journal Poems in Which. Her pamphlet Instead of Stars was published by tall-lighthouse in 2009. Her debut collection Luxe was published by Salt in November 2013.

Ikhda Ayuning Maharsi has worked in television, advertising and as a scriptwriter on a sitcom in Indonesia. She performed her poetry for the first time in 2011, at Cité Internationale Universitaire de Paris. She now lives in Naples, where she is enjoying her new role as mother to her little boy Corentin. Her first pamphlet, Ikhda, by Ikhda, was published by The Emma Press in March 2014.

After graduating from Oxford in 2012, Emma Reay was a little lost. She tried a few different things but soon decided to give adult life the slip and hitchhike around America, where she may still be right now. She has a keen interest in photography and her travel blog can be found at The North Ship.

Kristen Roberts is an Australian poet and full time mum. Her poetry has won the Michael Thwaites and page seventeen poetry competitions and has been published in Australian journals, which sometimes feels unbelievable when considered from the midst of Wiggles sing-alongs and toilet training. Kristen’s first pamphlet, The Held and the Lost, was published by The Emma Press in February 2014.

Jacqueline Saphra has won several awards including first prize in the Ledbury Poetry Competition. Her pamphlet, Rock’n’Roll Mamma, was published by Flarestack and her first full collection, The Kitchen of Lovely Contraptions (flipped eye) was developed with funding from Arts Council England and nominated for The Aldeburgh First Collection Prize.

Stephen Sexton lives in Belfast where he’s working towards a PhD at the Seamus Heaney Centre for Poetry. He was the winner of the inaugural Funeral Services Northern Ireland National Poetry Competition. His poems have appeared in The Open Ear, Abridged, and as part of the Lifeboat series of readings.

Jon Stone was born in Derby and is currently London-based. His collection, School of Forgery, was a Poetry Book Society recommendation and he won an Eric Gregory Award in 2012. He’s also co-creator of Sidekick Books, publishers of collaborative creative anthologies.

Sara-Mae Tuson has had short fiction, poetry and articles published in the Salt anthology Overheard, The Journal, Ink, Sweat and Tears, Inky Needles, Rising, Obsessed with Pipework, The London Magazine and more. She has performed as a guest at Loose Muse, Angel Poetry, The Hot House and Book Club Boutique.

Ruth Wiggins lives in East London with her partner and three sons. Her poetry has appeared in Brittle Star, Smiths Knoll and several anthologies. When not writing poetry, she enjoys hiking and photography; her book of women dressed as super heroes – Wonder Women of America – was published in 2008. She is a member of Forest Poets.

Jerrold Yam is a law undergraduate at University College London and the author of Scattered Vertebrae (2013) and Chasing Curtained Suns (2012). His poems have been published in over sixty literary journals and anthologies worldwide. He has been awarded poetry prizes from Arts Council England, the British Council and the National University of Singapore, and is the youngest Singaporean to be nominated for the Pushcart Prize.