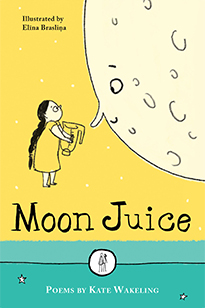 WINNER OF THE 2017 CLiPPA, THE AWARD FOR THE BEST CHILDREN’S POETRY BOOK

Meet Skig, who’s meant to be a warrior (but is really more of a worrier). Meet a giddy comet, skidding across the sky with her tail on fire. Put a marvellous new machine in your pocket and maybe you’ll be able to fix all your life’s problems. Kate Wakeling’s first book of poems for children is full of curious characters and strange situations. The poems she writes are always musical, sometimes magical, and full of wonder at the weirdness of the world.

Moon Juice contains 25 poems and features bonus materials, including interviews with the author and the illustrator, and ideas for writing your own poems.

‘This collection takes a delight in the power of language, imagination and the white space that surrounds each poem. This is a confident and versatile debut from a welcome new voice in children’s poetry.’ Rachel Rooney, author of The Language of Cat

‘A debut collection of poetry that presents magical, strange and unlikely events in a confident and persuasive way.’ – 2017 CLiPPA judges

‘Kate thoughtfully addresses childhood issues around peer pressure, worry and anxiety, and fitting in with others in such a beautiful and lyrical way. Poems achieve the balance of being beautifully written and also short enough to hold youngsters’ attention but long enough to impart their important and thought-provoking messages.’ – ReadItDaddy

‘I very much liked Wakeling’s inventiveness and imagination. Children of 7 and up would relish the surreal ‘Hamster Man’ or ‘The Demon Mouth’ and the language and content of the poems is slap bang up to date and all the better for it. […] The poems are varied in shape and form, there is bold use of white space and a sense of enjoyment in the language. I think 7 year olds would love this one and I expect it to walk out of my study very soon.’ – Carole Bromley, The North

‘There’s a focussed precision in much of Kate’s writing that turns many of her poems into sharp injections of humour or close observation. Her words are gently juxtaposed with black and white illustrations by the Latvian artist Elīna Brasliņa. Expressive, playful and good at making you re-read the poem to see another of its strands, they play an important role in making this book appealing and approachable.’ – Playing by the Book

‘A collection of poems by a new voice writing for children is an event to be celebrated. Moon Juice by the poet, Kate Wakeling is just such an event. However, these are not poems created to grab the attention with the quick laugh and a lot of noise; these are poems to seduce, to attract because they reflect the imagination of the young reader.’ – Ferelith Hordon, Books for Keeps

Kate Wakeling is a poet and ethnomusicologist. Her poetry has appeared in magazines and anthologies including Oxford Poetry, Magma, The Guardian, The Best British Poetry 2014 (Salt) and The Forward Book of Poetry 2016 (Faber & Faber), and a pamphlet of her poetry for adults, The Rainbow Faults, is published by The Rialto. Moon Juice is her first poetry collection for children.

Kate is writer-in-residence with Aurora Orchestra where her scripts, stories and verse for family audiences have featured at Kings Place, the Melbourne Festival, the bOing! Festival and on BBC Radio 3. She also writes and performs with chamber ensemble TROUPE (‘concerts that tell stories’), with recent performances at Wigmore Hall and the Spitalfields Summer Music Festival.

Kate studied music at Cambridge University and holds a PhD in Balinese gamelan music from the School of Oriental & African Studies. She lives in Oxford with her husband and son Hamish.

Elīna Brasliņa studied Printmaking and Graphic Arts at the Art Academy of Latvia. Since 2014 she has illustrated ten titles, including Moon Juice, which is her international debut. She has received a number of nominations in Latvia and was twice awarded the Zelta Ābele (Golden Apple Tree) National Prize for Book Art. You can find her website here.