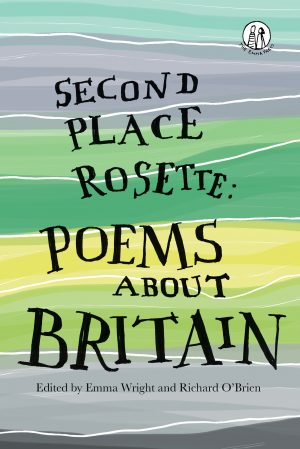 Second Place Rosette is a collection of poems about the customs, rituals and practices that make up life in modern Britain.

The poems take in maypole dancing, mehndi painting, and medical prescriptions. Some events, like the Jewish Sabbath, happen every week; some, like the putting away of Christmas decorations, thankfully come only once a year.

Much of the book displays an ambivalence towards the land and its rituals, but there is also love, affection and pride. Mixed feelings: what could be more British than that?

Richard O’Brien is a poet, translator and academic based in Birmingham, UK. He has a PhD on Shakespeare and the development of verse drama. Richard’s pamphlets include The Emmores (Emma Press, 2014) and A Bloody Mess (Valley Press, 2015). His work has featured in Oxford Poetry, Poetry London and The Salt Book of Younger Poets. In 2017, he won an Eric Gregory Award from the Society of Authors for his poetry.

Dean Atta’s debut poetry collection, I Am Nobody’s Nigger, was shortlisted for the Polari First Book Prize. His poems deal with themes of race, gender, identity and growing up, and have appeared on BBC One’s The One Show and several times on BBC Radio 4, BBC World Service and Channel 4.

Sarah Barr lives in Dorset and writes poetry and fiction. Her poems have appeared in The Frogmore Papers, The Interpreter’s House, South, the Bridport Prize Anthologies 2010 and 2016 and 105 The Templar Anthology 2016. She teaches creative writing in Dorset and for the Open University.

Julia Bird grew up in Gloucestershire and now lives in London where she works as a literature promoter. She has published two collections with Salt Publishing (Hannah and the Monk, 2008, and Twenty-four Seven Blossom, 2013) and an illustrated pamphlet – Now You Can Look – with the Emma Press in 2017.

Jerrold Bowam: a British/Canadian writer who aspires to find others who are as amused as his muse, have a predilection for repetition and a penchant for recurrence.

Jo Brandon was born in 1986 and currently lives in West Yorkshire. Jo has a pamphlet, Phobia (2012), and a full-length collection, The Learned Goose (2015), both with Valley Press. Jo’s work has featured in various publications including The Poetry Review, The North, Butcher’s Dog and Magma. www.jobrandon.com

Carole Bromley lives in York where she is the stanza rep and runs poetry surgeries for the Poetry Society. Winner of a number of first prizes, Carole has three collections with smith|doorstop: A Guided Tour of the Ice House, The Stonegate Devil and Blast Off!, a children’s collection.

Alan Buckley is from Merseyside, and now lives in Oxford. He has two poetry pamphlets: Shiver (tall-lighthouse, 2009), and The Long Haul (HappenStance, 2016). He was highly commended in the 2017 Forward Prizes. He is a poetry editor at ignitionpress, and a school writer-in-residence with the charity First Story.

Shruti Chauhan is a poet and performer from Leicester. In 2018, she won the National Poetry Library’s Instapoetry competition and was voted Best Spoken Word Performer at the Saboteur Awards. Shruti’s debut pamphlet, That Which Can Be Heard, is forthcoming with Burning Eye Books in November 2018.

Oliver Comins lives in West London and writes poems about people, sport, landscape and growing up. He grew up in Warwickshire, the county where Edge Hill is located. Templar Poetry has published three of his pamphlets since 2014 and a full length collection, Oak Fish Island, in 2018.

Aviva Dautch has an MA in creative writing from Goldsmiths and a PhD in poetry from Royal Holloway. Her poems are published in magazines including Agenda, Modern Poetry in Translation and The Poetry Review. In 2017 she won the Poetry School/Nine Arches Press Primers Prize for emerging voices.

Tracy Davidson lives in Warwickshire and writes poetry and flash fiction. Her work has appeared in various publications and anthologies, including: Mslexia, Modern Haiku, Shooter, Journey to Crone, Ekphrastia Gone Wild, The Emma Press Anthology of Aunts and In Protest: 150 Poems for Human Rights.

Ian Dudley’s most recent publications have been in Ink, Sweat and Tears, The Rialto and Zoomorphic. He has won the Oxonian Review (2015) and Aesthetica (2017) poetry competitions, and featured in Eyewear’s The Best New British And Irish Poets 2016.

Clementine Ewokolo-Burnley is a migrant writer, mother and community worker. She has been a finalist in the Bristol Short Story Prize Competition 2017, the Miles Morland Scholarship Award and received an Honourable Mention in the Berlin Writing Prize Competition. @decolonialheart

Steve Harrison born in Yorkshire and now lives in Shropshire. His work has appeared in Emergency Poet collections, Wenlock Festival, The Physic Garden, Pop Shot, Mid-Winter Solstice, The Curlew and Poets’ Republic. He regularly performs across the Midlands and won the Ledbury Poetry Festival Slam in 2014.

Ramona Herdman’s pamphlet Bottle is published by HappenStance Press. It was the Poetry Book Society Pamphlet Choice for Spring 2018 and one of the Poetry School’s Books of the Year 2017. She won the Poetry Society Hamish Canham prize 2017. @ramonaherdman

Maryam Hessavi is a British, Manchester-based poet of English and Iranian descent. Her poetry has been published in Smoke Magazine and is forthcoming in Ambit. She is a Ledbury Emerging Poetry Critic, with reviews featured in The Manchester Review, Poetry London and The Poetry School website.

Nicola Jackson writes in London and Cumbria, inspired by landscape and ancient communities. Her poetry is published in journals and newspapers. She has won prizes including the Geoff Stevens Memorial Prize 2017 for her debut collection, Difficult Women, (Indigo Dreams Press). She has an MA in Writing Poetry.

Angela Kirby was born in rural Lancashire when there was a strong tradition of festivals, cultural and religious. She now lives in London. Shoestring Press published her four collections: Mr Irresistible, Dirty Work, A Scent of Winter, The Days After Always, and New and Selected Poems. A fifth is due out in 2019.

Joan Lennon lives in Fife. By day she is a novelist and has recently had her 21st book published, but by night she is a poet. Her latest pamphlet – a narrative poem called Granny Garbage – is published by HappenStance.

Nick Littler is a poet and songwriter based in Cardiff. His poem ‘The Girls from Maynard’s’ appeared in the Emma Press anthology In Transit: Poems of Travel. He writes and records music under the name Pocket Witch, and his first album, Nothing the Sun, came out in June 2018.

Derek Littlewood is a poet and naturalist living in Worcestershire. He has collected stones from many seaside locations, including Cornwall and Lizard Point, the site of many family holidays with his wife and children.

Roy McFarlane is a former Birmingham Poet Laureate and current poet-in-residence at the Birmingham & Midland Institute. He has three collections: Celebrate Wha? (Smokestack, 2011), Beginning With Your Last Breath and The Healing Next Time (Nine Arches, 2016 and 2018).

Kibriya Mehrban is a University of Birmingham Creative Writing graduate whose poetry first featured in the inaugural Verve Poetry Festival anthology This is Not Your Final Form (Emma Press, 2017). As of 2018, she is interning at Writing West Midlands and relentlessly pursues poetry in all its forms.

Fiona Moore’s first collection The Distal Point has just come out from HappenStance Press and is a Poetry Book Society Autumn 2018 Recommendation. She is co-editing Magma 72 on climate change.

Tom Moyser lives in London and is an English teacher. His poetry has been published in the First Story anthology Footsteps. Every August, he attends a folk music festival in Sidmouth and has been in their Torchlight Procession about three times.

Margot Myers lives in Oxford. Her poems and flash-fiction have had some success in competitions including Havant, Cinammon, and Bridport. She has been published in The Interpreter’s House, and the Emma Press anthologies of Dance, Urban Myths and Legends and Aunts. She celebrates as many feasts and festivals as possible.

Carolyn O’Connell lived in London for most of her life and has recently moved to Cheshire. Her poetry has been widely published in magazines and anthologies both in the UK and US, including by Envoi, Reach and Aspire. Her first collection, Timelines, was published by Indigo Dreams in 2014.

Claire Orchard is a poet from Wellington, New Zealand, whose father was born and raised in Farnworth, Lancashire. Her first poetry collection, Cold Water Cure, was published by Victoria University Press in 2016. claireorchardpoet.com

Cheryl Pearson lives and writes in Manchester. Her poems have been published in The Guardian, Southword, Under The Radar and The Interpreter’s House. She has twice been nominated for a Pushcart Prize, and is a reader for Frontier Poetry. Her first collection, Oysterlight, is available now from Pindrop Press.

Kathy Pimlott’s pamphlet Goose Fair Night (Emma Press) was published in 2016. Her poems have appeared in magazines including Poem, Magma, The North, South Bank Poetry, Morning Star and Brittle Star, and in several anthologies. Kathy lives in Seven Dials, London, where she works as a public realm project manager.

Kim M. Russell grew up in London in the sixties, when she enjoyed day trips to the south coast with her grandmother and sister, and one memorable holiday in Clacton with a glamorous aunt – rich pickings for a poet. She now lives in Norfolk with her husband and two cats.

Natalie Shaw lives in London and works for the Government Digital Service. Her poems can be found in many different print and online journals, as well as in a variety of anthologies.

Hollie-Anne Slatcher is from Surrey and is currently studying Creative Writing and English Literature at the University of Birmingham. ‘The Queens Head At Christmas’ is her first poem to be published and is based on a traditional pub in Hastings, which her grandparents used to own.

Pam Thompson is a poet, lecturer, reviewer and writing tutor based in Leicester. Her publications include The Japan Quiz (Redbeck Press, 2009) and Show Date and Time, (smith|doorstop, 2006). Pam has a PhD in Creative Writing and her second collection, Strange Fashion, was recently published by Pindrop Press.

Beth L. Thompson is from Liverpool, where she grew up dancing, singing, guitar-playing and writing. Beth recently completed her MA in Writing at the University of Warwick, where her work was anthologised in Moonshine (Ball Bearing Press, 2017). She is currently working on her first novel.

Louise Walker lives in London and has been teaching English for over 30 years in girls’ schools. Her poems first appeared in the Florio Society’s anthologies (Sycamore Press). In 2017 her pamphlet An Ordinary Miracle was published by the Barafundle Press.

Rob Walton is proud to have been born in Scunthorpe, the ‘Industrial Garden Town’, a few miles from where the Haxey Hood takes place. He now lives on Tyneside. His poems and short fictions have been published in various places.

Ros Woolner grew up in Bourne End, a village on the Thames between Marlow and Cookham. Her poems have appeared in Magma, The Cannon’s Mouth, Under the Radar and a number of anthologies. Her first pamphlet, On the Wing, was published by Offa’s Press in 2018. www.roswoolner.co.uk