Some Cannot Be Caught: The Emma Press Book of Beasts 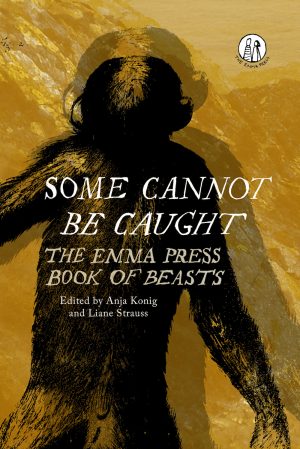 The Emma Press Book of Beasts rustles and roars with the voices of animals and humans, co-existing on Earth with varying degrees of harmony. A scorpion appears in a shower; a deer jumps in front of a car. A swarm of snowfleas seethes through leaf litter; children bait a gorilla at the zoo. The poems in this anthology examine hierarchy, herds, power, and the price we pay for belonging.

Anja Konig grew up in the German language and now writes in English. Her first pamphlet, Advice for an Only Child, was shortlisted for the 2015 Michael Marks Award. Anja is working on her next collection of poems, Animal Experiments. She is a scientist by training and has long been fascinated by human primates and other creatures.

Liane Strauss is an American poet and professor of Comparative Literature and Creative Writing. She is the author of three poetry collections: Frankie, Alfredo, (Donut Press, 2009), Leaving Eden (Salt Publishing, 2010), and All the Ways You Still Remind Me of the Moon (Paekakariki Press, 2015). Liane teaches at NYU, participates regularly in The Hudson Review’s Writers in the Schools, and holds an active Research Fellowship at Goldsmiths, University of London. She is currently looking for a US publisher for her most recently completed manuscript of poems, Prodigal, working on a new collection of poems, and beginning to circulate her first novel, The Other Side of You, to agents.

Kathleen Moran Bainbridge has worked as a singer, teacher and Gestalt therapist. In 2014 she was runner-up for the Flambard Prize and in 2015 she won a New Writing North award. Her poems have appeared in magazines, anthologies and online. She lives across a ford in Northumberland.

Sharon Black is from Scotland but now lives in the mountains of the south of France, where scorpions are a welcome but infrequent occurrence. She has two collections: To Know Bedrock (Pindrop Press, 2011) and The Art of Egg (Two Ravens Press, 2015). www.sharonblack.co.uk

Victoria Briggs is an award-winning, Pushcart-nominated writer of poetry and short fiction, with work published in The Stockholm Review, Structo, The Honest Ulsterman, Unthology, Litro, Prole, Short Fiction and The Jellyfish Review. She lives in London, where she’s writing a novel, and tweets @vicbriggs.

Nancy Campbell’s books include How To Say ‘I Love You’ In Greenlandic: An Arctic Alphabet, which won the Birgit Skiöld Award in 2013, and Disko Bay (Enitharmon, 2015), which was shortlisted for the Forward Prize for Best First Collection in 2016. www.nancycampbell.co.uk

Tim Cresswell is a geographer-poet. He is the author of two collections published by Penned in the Margins: Soil (2013) and Fence (2015). He lives in West Hartford, Connecticut with his wife Carol, daughter Maddy, and three cats, Quin, Leo and Brie.

Maggie Dietz’s two books of poems are That Kind of Happy and Perennial Fall. She is Associate Professor at the University of Massachusetts Lowell.

Philip Fried has published seven books of poetry, most recently Squaring the Circle (Salmon Poetry, 2017). His collection Interrogating Water (Salmon, 2014) was called ‘outstanding’ by Carol Rumens in the Guardian. ‘Snowflea Migration’ is from a series of poems in the voices of insects.

Gregg Friedberg is the author of The Best Seat Not in the House (Main Street Rag, 2010; Embajadoras Press, 2017), a poem sequence concerning the relations between creator and creature, and Would You Be Made Whole? (Aldrich Press, 2015), a collection of ‘unruly’ sonnets.

David Hale has a pamphlet from HappenStance and another from Templar. He has a lurcher, a ginger tom and a chestnut mare and enjoys the company of animals.

Sarah Hesketh holds an MA in Creative Writing from UEA. In 2013 she was poet-in-residence with Age Concern, working with elderly people with dementia, and in 2014 she published The Hard Word Box (Penned in the Margins), a collection of poems and interviews inspired by this experience.

Sandra Horn is an award-winning children’s author based in Southampton. She has had poems commissioned by BBC Active Schools’ history programmes and has been published in Magma and Artemis poetry magazines and in The Emma Press Anthology of Age.

Katherine Horrex’s poems have featured in the Times Literary Supplement, Morning Star, and PN Review, among others. Her work has also been anthologised in Introduction X (The Poetry Business, 2017) and most recently in New Poetries VII (Carcanet, 2018).

Ian Humphreys has been widely published in journals including Ambit, The Poetry Review and The Rialto. In 2016, he won the Hamish Canham Prize and was selected for The Complete Works III. A portfolio of his poems features in TEN: Poets of the New Generation (Bloodaxe, 2017).

Helen Ivory’s fourth Bloodaxe collection is Waiting for Bluebeard. She edits the webzine Ink Sweat and Tears and is tutor and course director for the UEA/WCN Creative Writing programme. Her collection The Anatomical Venus is forthcoming from Bloodaxe.

Russell Jones is an Edinburgh-based writer and editor. He has published four collections of poetry and edited two writing anthologies. He is deputy editor of Shoreline of Infinity, a science fiction magazine. He has a PhD in Creative Writing from The University of Edinburgh.

Donika Kelly’s first poetry collection BESTIARY (Graywolf, 2016) was the winner of the 2015 Cave Canem Poetry Prize. She received her MFA in Writing from the Michener Center for Writers and a PhD in English from Vanderbilt University. She is an Assistant Professor at St. Bonaventure University.

Eve Lacey is from Brighton and lives in Cambridge, where she works as a librarian. She is the editor of Furies (For Books’ Sake, 2014), and The Emma Press Anthology of the Sea (2016). In 2017, she was a poet-in-residence at Addenbrooke’s hospital.

Emma McKervey’s debut collection The Rag Tree Speaks was published in 2017 by Doire Press. Her poems have been shortlisted for the Irish Poem of the Year (2016) and the FSNI National Poetry Competition (2016) and highly commended in the Seamus Heaney New Writing Prize in 2017.

Cheryl Moskowitz was born in Chicago and grew up among the foothills of the Rocky Mountains in Denver, Colorado. She writes for adults and children. Her publications include The Girl is Smiling (Circle Time Press, 2012) and Can it Be About Me? (Frances Lincoln, 2012).

Abigail Parry’s first collection, Jinx, is published by Bloodaxe, and features lemurs, lizards, moths, minnows, corvids, reedlings, a wolf, a hare, a shark, a snake and a sexy goat.

Pascale Petit’s seventh collection, Mama Amazonica (Bloodaxe, 2017), was a Poetry Book Society Choice and draws on her travels in the Amazon rainforest. Her sixth, Fauverie, was her fourth to be shortlisted for the T. S. Eliot Prize and five poems from it won the Manchester Poetry Prize. In 2015 she received a Cholmondeley Award.

Pauline Plummer is an Irish/Welsh mixture from Liverpool who has lived in the North East since the 80s. Her last full collection was Bint (Red Squirrel Press, 2011). She has also published short stories and a verse novella From Here to Timbuktu (Smokestack Press, 2012).

Stav Poleg’s poetry has appeared in The New Yorker, Poetry London, and Poetry Ireland Review. Her graphic-novel installation, Dear Penelope: Variations on an August Morning, with artist Laura Gressani, was acquired by the Scottish National Gallery of Modern Art. She lives in Cambridge, UK.

Mel Pryor has won the Essex Poetry Prize, the Ware Sonnet Prize and the Philip Larkin Poetry Prize. She has published two books with Eyewear: a pamphlet, Drawn on Water (2014), and a full collection, Small Nuclear Family (2015), which was described in the TLS as ‘a remarkable debut’.

Angela Readman has won the Mslexia and Essex poetry competitions and the Charles Causley Award. Her latest collection is The Book of Tides (Nine Arches, 2016) and her debut story collection Don’t Try This at Home (And Other Stories, 2015) won The Rubery Book Award.

Susan Richardson is a poet, performer and educator whose fourth collection of poetry, Words the Turtle Taught Me, has just been published by Cinnamon Press. She is currently poet-in-residence with both the global animal welfare initiative, World Animal Day, and the British Animal Studies Network. www.susanrichardsonwriter.co.uk

Shauna Robertson’s poems have been set to music, displayed on buses, made into comic art, hung on a pub wall, and published in various lit mags and anthologies. She has two chapbooks: Blueprints for a Minefield and Hack. Shauna also writes for children and makes artwork.

Jacqueline Saphra’s recent pamphlets are If I Lay on my Back I Saw Nothing but Naked Women (Emma Press, 2014) and A Bargain with the Light: Poems after Lee Miller (Hercules Editions, 2017). Her latest collection, All My Mad Mothers (Nine Arches, 2017), was shortlisted for the T.S. Eliot prize.

Maggie Sawkins is the winner of the 2013 Ted Hughes Award for New Work in Poetry. She lives in Portsmouth and is involved in writing projects in community and healthcare settings. www.hookedonwords.wordpress.com

Rosie Shepperd’s collection The Man at the Corner Table(Seren) was published in 2015. Her poem ‘A seedy narrative or moments of lyrical stillness?’ was shortlisted for the Forward Prize for Best Single Poem in 2013. She is currently finishing a PhD at Goldsmiths.

Saliann St-Clair obtained a first in the BA Creative Writing programme at Birkbeck, University of London. She is a London-born, psychotically calm, functioning anaemic who writes, sings, travels, camps indoors and eats cake. She is a content writer for an online magazine, and is working on her first novel and first collection of poems.

Degna Stone is co-founder of Butcher’s Dog poetry magazine and a contributing editor at The Rialto. She received a Northern Writers’ Award in 2015, holds an MA in Creative Writing from Newcastle University and is a fellow of The Complete Works.

Jon Stone previously co-edited the four-volume Birdbook anthology series and Aquanauts, a compendium on underwater life and exploration (all published by Sidekick Books). He is also co-author of a book of tropical animal sonnets, Riotous, which won a Saboteur Award for Best Collaboration. He owns a soft toy cheetah called Quickstep.

Gabrielle Turner is a writer, editor and translator living where Surrey, Berkshire and Hampshire converge. When she’s not writing poems and stories you’ll find her exploring forests and riverbanks, sculpting creatures out of clay or indulging the whims of her mostly upside-down greyhound.

Bitite Vinklers is a translator of Latvian folklore and contemporary literature. Her translations have appeared in anthologies and journals, including The Paris Review, Subtropics and Words Without Borders. Recent work includes Imants Ziedonis, Each Day Catches Fire: Poems (Red Dragonfly Press, 2015), and Knuts Skujenieks, Seed in Snow: Poems (BOA Editions, 2016).

Ruth Wiggins lives in London. Her poems have appeared most recently in POETRY, The Poetry Review, Long Poem Magazine and The Wolf. Her pamphlet Myrtle (Emma Press, 2014) was runner-up in the Fledgling Poetry Award. She blogs at mudpath.wordpress.com