The Dog Who Found Sorrow 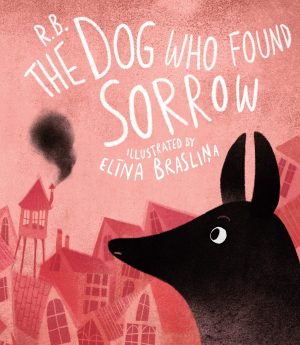 The Dog Who Found Sorrow is a beautiful, resonant picture book about sadness and healing, suitable for all ages.

It tells the story of a dog who, waking to find his hometown covered in thick black clouds, goes out in search of the source of sorrow. It’s an intrepid quest, a parable about hope, and a tonic for our sorrowful times.

The text is written by Rūta Briede, a leading illustrator and instructor at the Latvian Academy of Arts, and illustrated by Elīna Brasliņa.

Rūta Briede illustrates books, draws comic, designs puppet shows and teaches at the Art Academy of Latvia. She is the creator of the BICKI-BUCK BOOKS series and the puppet stage show based on this story about Renata. You can visit Rūta’s website here: http://rutabriede.lv/

Elīna Brasliņa studied Printmaking and Graphic Arts at the Art Academy of Latvia. Since 2014 she has illustrated ten titles, including the award-winning Moon Juice, which is her international debut. She has received a number of nominations in Latvia and was twice awarded the Zelta Ābele (Golden Apple Tree) National Prize for Book Art. You can visit Elīna’s website here: www.elinabraslina.com