With illustrations by Emma Wright 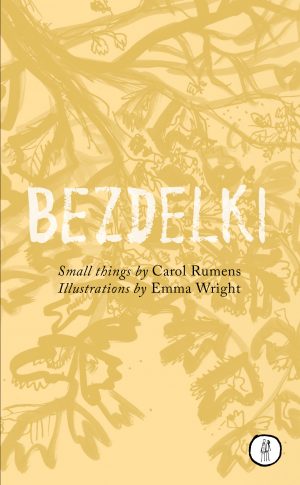 In Carol Rumens’s Bezdelki, small things help to shore up the memory of a life. These elegies, written in memory of Yuri Drobyshev, explore the principle that death, even for atheists, isn’t purely loss.

Instead, a kind of conversation between two people can be continued through willed acts of memory, whether by rooting through incidental artefacts found in a toolbox (‘defiant old metals, coupled/irrefutably and awkwardly for life’) or by revisiting works of Russian literature that both members of the couple admired.

Translations and imitations of Osip Mandelstam share space with fragments of Egyptian mythology and ‘a wardrobe of old sweat-shirts’ to convey the powerful, and moving, impulse to ‘live with your death unburied at my core’.

‘The Emma Press delivers another beautifully illustrated collection, featuring poems and translations dedicated to the memory of translator Yuri Drobyshev. A reflection upon memory and the mortal condition, Rumens draws from a range of cultural touchstones, including historical imaginings of the afterlife. A moving and thought-provoking pamphlet.’ – PBS Bulletin

Carol Rumens is originally from South London and now lives in North Wales, where she teaches creative writing at Bangor University. She has published sixteen collections of poetry, most recently Animal People (Seren, 2016). Her work appears in many anthologies, including The Best British Poetry (2014) and The Forward Anthology (2016). She is a Fellow of the Royal Society of Literature.