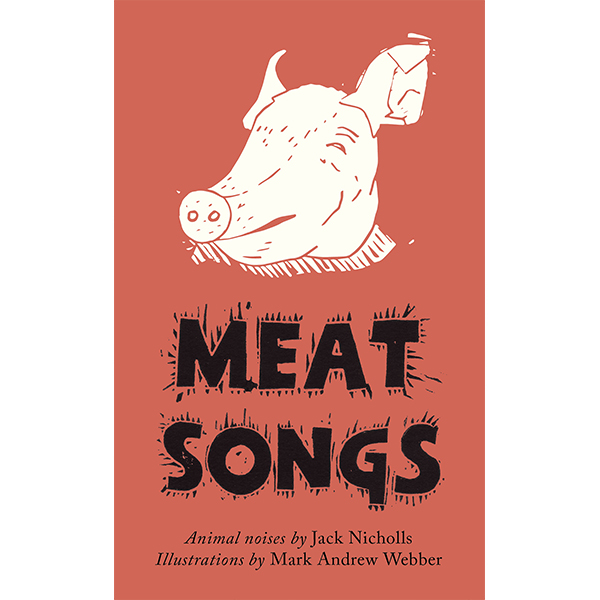 The voices of humans and animals, living and dead, clamour for the reader’s attention in Meat Songs. Headlice roam their strange habitat, a severed pig’s head questions an undergraduate’s choices, and packaged meat products are ignoring the future.

‘What a wonderful collection. Visceral, beautiful, staggeringly original, and wise. The best thing I have ever read about ants.’ Emma Jane Unsworth, author of Animals

‘Like the beast-headed spawn of Les Murray’s Translations from the Natural World and Dave Eggers, these poems take the deep animal intelligence and tongues of our own bodies and makes them croon in the modern world. These love songs, full of the fears of birth and the certainty of death, are warmed by the need for touch – urgent sensual immediacy – that links lice with philosophers, cats with YouTubers. Jazzy; mournful; surreal; Jack Nicholls is a name we can expect to hear more from in the future.’ Eoghan Walls, author of The Salt Harvest

‘Meat Songs is a thing of dark wonder.  It unlocks sense receptors you never knew you had and floods them with sensations you never knew were possible. In its foamy, bony, visceral brilliance, Nicholls’ ruthlessly remodelled language evokes non-human interiors – animal minds, corpse spirits, mineral souls – and charges them with a scathing immediacy of life.  A funny, frightening, heart-burstingly beautiful book.’ Anthony Trevelyan, author of The Weightless World

‘In its surrealism, its dark comedy, its pitch-perfect sense of style, and its exploration of the surprising possibilities of prose poetry, this pamphlet puts me in mind of Luke Kennard’s work, although Nicholls has a voice all his own. Despite drawing attention to contentious issues, there is no preaching here. Rather, the poems express a quizzical wonderment at the strangeness of things, which is more powerful in its potential to recalibrate our views on the subject than any ranting polemic.’ – David Clarke, Sabotage Reviews

Jack Nicholls comes from Cornwall. His fiction and poetry have been published in the Chicago Quarterly Review, PANK, The Best New British and Irish Poets 2017 (Eyewear) and other places. He makes comedy with the sketch group Beach Hunks and runs the experimental live art event FLIM NITE in Manchester, where he’s currently based.

Artist-printmaker Mark Andrew Webber specialises in painstakingly-researched typographic and geometric projects, including his ‘Where in the World’ series of enormous city maps and ‘FORM’, a six-part study of line and form. In 2007, Webber was awarded a Silver Cube award from the Art Directors Club of New York. His first solo exhibition, ‘Wonderlust’, was on display at the Londonewcastle Project Space in London in 2014. He collaborated with poet Jacqueline Saphra on her pamphlet If I Lay on my Back I Saw Nothing but Naked Women (Emma Press, 2014), illustrating her poems with linocuts inspired by his lifedrawing sketches. He is based in Reading.