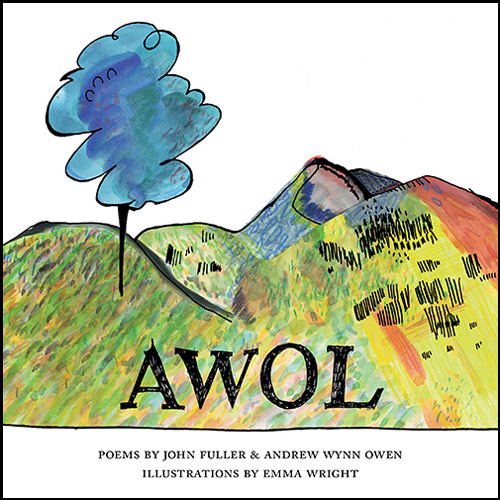 ‘Now: did you find it hard to stand
Aside from life awhile, and think
Of what it would be like unplanned?’

In rural Wales, wandering the dunes west of Pwllheli, John Fuller has composed a letter on the subject of travel: warning against it, wondering about people’s presences and absences, and serenely admiring ‘the Wales of sheep and song’. His correspondent, young Andrew Wynn Owen, replies with friendly enthusiasm, matching John’s poetic form while flouting his advice and hopping from gallery to garret via Luxembourg and Venice. Between them, they consider: is it better to risk seeming ‘stay-at-home, | A stick in mud’ or ‘to pass life scared | Of stillnesses’?

AWOL is an infinitely charming collaboration between the eminent poet John Fuller, with a career spanning over 50 years, and bright young poet Andrew Wynn Owen, whose first pamphlet was published in 2014. Beautifully produced in a large square format, this book is illustrated throughout in full-colour with watercolours and line drawings by Emma Wright. The epistolary poems are composed in terza rima in tetrameter lines, reflecting both poets’ love of metre and formal challenges.

‘Complemented by Wright’s illustrations, Fuller’s contributions are a vivid evocation of what he calls in his sixth verse letter ‘the Wales of sheep and song’. Their deeper preoccupation, however, is whether it is better to stay or go. Travelling is often deemed more virtuous than staying home, but perhaps fidelity to a situation is the more virtuous and, at least, kinder to one’s friends. ‘ – Robert Selby, BookSmoke

John Fuller is a poet, novelist and critic. He is an Emeritus Fellow of Magdalen College, Oxford, where from 1966 to 2002 he was Tutor in English. The first of his seven novels, Flying to Nowhere, won a Whitbread Prize and was shortlisted for the Booker Prize. He is the editor of the Clarendon Press edition of the plays of John Gay, author of W. H. Auden: a commentary, and editor of The Oxford Book of Sonnets. He has published collections of short stories, anthologies, texts for composers, and works for children. Among his most recent books are Who is Ozymandias? and other puzzles in poetry (Chatto and Windus, 2011), New Selected Poems 1983-2008 (Chatto, 2012) and The Dice Cup, a collection of prose poems (Chatto, 2014). A new collection, Gravel in my Shoe, is forthcoming from Chatto in 2015. Photo credit: © Paul Stuart.

Andrew Wynn Owen is in his fifth year at Magdalen College, Oxford, researching for a DPhil on epic poetry of the Romantic era. In 2014, his first pamphlet, , Raspberries for the Ferry, was published by the Emma Press. Also in 2014, he was awarded Oxford University’s Newdigate Prize and Lord Alfred Douglas Prize. In 2015, he received an Eric Gregory Award.

Emma Wright studied Classics at Brasenose College, Oxford, and worked in ebook production at Orion Publishing Group before leaving to set up the Emma Press in 2012. She illustrates all of the Emma Press poetry anthologies and the ‘Emma Press Picks’ pamphlet series.