Now You Can Look 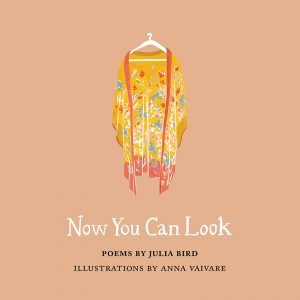 This is a tale you can read three ways. The first time through, it’s the story of a woman who takes one glance at conventional early-twentieth-century life, and throws in her lot with art instead.

The second time, you might ask yourself if this woman is based on any particular artist of the inter-war period, and you’d be right to wonder – though this is no work of scholarly biography. A line connects the historical to the here-and-now, but it’s feathered and soft.

Third time reading, find the point where memoir and imagination connect. Now you can look.

While Now You Can Look was inspired by the lives of various artists from the 1930s and 40s, the poems are conflations of history, autobiography and fiction and do not depict actual people, living or dead.

The setting is the south of England, beginning just after the First World War. The cast list: an artist, her family, her husband, their lovers, friends and children. Uncredited extras are the writer and you, the reader.

‘Beginning with her childhood and taking us on a sensory and emotive journey through adolescence and onwards to her role as a wife and mother, Julia’s poems sparkle with wit, intrigue and richly captivating imagery. ‘ – Caitlin Miller, Irisi Magazine

‘In such images, Bird’s poetry shows how artwork is not separate to everyday life, but entwined with it – and, moreover, bound up with its transience: in these poems, omelettes, snowmen, marrows are all short-lived moments of artistic beauty.’ – Jonathan Taylor, Everybody’s Reviewing

‘This deftly composed poem sequence, paired with Anna Vaivare’s vibrant illustrations, moves through the life of a female artist during the early part of the twentieth century. Beginning from age nine, towards and past the point where the unnamed artist has a child of her own, Now You Can Look has a sharp, immediate quality which pulls you firmly into a life which both did and did not exist – vanished, imagined, or perhaps something else.’ – PBS Bulletin

Julia Bird grew up in Gloucestershire and now lives in London where she works as a poetry promoter and live literature producer. She has published two poetry collections with Salt: Hannah and the Monk (2008) and Twenty-four Seven Blossom (2013).

Anna Vaivare is an illustrator and architect who lives in Rīga, Latvia. She has illustrated two children’s books and was awarded the Jānis Baltvilks Prize for Book Art for her work in Forage for Porridge (Liels un mazs, 2015), a collection of poems for children by Leons Briedis. She also draws comic strips. You can find more of her work on her website: www.annavaivare.lv