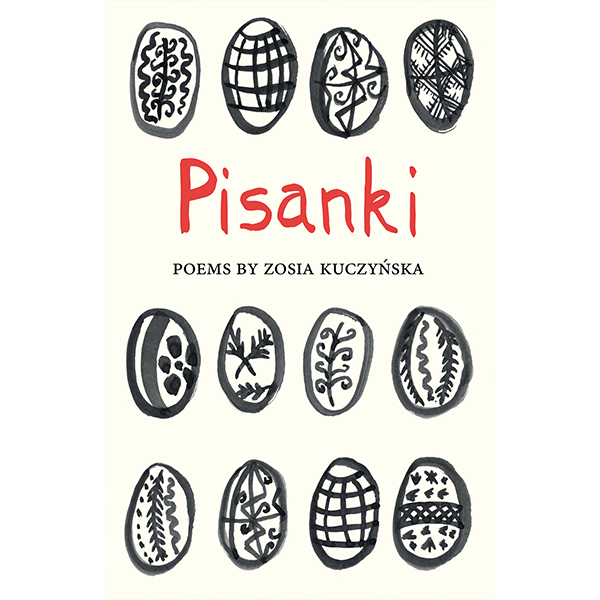 In 1940, a young girl is taken from her home in Eastern Poland to Arkhangelsk, Siberia; in 1942, she boards a train. Seventy years later, that journey is reimagined by her granddaughter, Zosia Kuczyńska. As Kuczyńska’s poems tell the story of her babcia, her maternal grandmother, coming to England, she confronts some of the big questions of art and history: how do you tell another person’s story without exploiting it? What’s at stake when we try make patterns out of the past, and can we ever leave those patterns behind?

Kuczyńska’s poems are both richly narrative and sharply attentive to the complexities of home and culture. They capture human endurance through the redrawing of political maps, from ‘the heat of Easter in Tehran’ to the powdered eggs and stocking shortages of the London Blitz.

From the introduction by Bernard O’Donoghue

‘The backstory to Zosia Kuczyńska’s haunting poems in Pisanki is a remarkable one: the removal of over 2000 Polish children to Maharashtra in India in 1942, after they and their families were deported to Siberia following the Soviet attack on Poland in 1939. […] This altogether remarkable and accomplished book is indeed a text for the times, in this terrible epoch of failed refugees. But what it leaves us with is a sense of the triumph of the human spirit in the most adverse conditions. It does this without ever preaching, but by finding what Yeats called ‘befitting emblems of adversity’ in order to overcome it. It is a major and important achievement.’

‘Kuczynska narrates a bond between generations, one that has led her to depict the pear trees and “metal-sown” fields of her grandmother’s memories. Pisanki is a spellbinding tapestry of images and emotions, of displacement, loss and hope.’ – PBS Bulletin

Zosia Kuczyńska was born in Solihull in 1988 to the children of post-WWII displaced persons from the eastern border of Poland. She grew up in Nottingham, where she is currently a Teaching Affiliate at the University of Nottingham. She has recently completed her doctorate on ‘Time and Space in the Plays of Brian Friel’ at Trinity College Dublin and has had poems published in The Open Ear and with The Lifeboat. [Photo © Benia Kuczyńska]