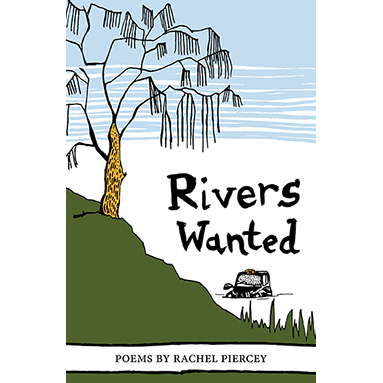 With an introduction by Kathryn Maris

Rachel Piercey charms and disturbs in Rivers Wanted, her first full-length pamphlet. She writes about growing up and navigating love and life in poems which speak disarming truths in a miscellany of voices. She invites us into a lively realm of bicycles, pigeons, taxis and slot machines, where hope and anxiety wrestle and nature is scratching at the door.

‘Rachel Piercey is a free spirit who travels through time, voices and styles. Unselfconsciously musical, her exuberant style contrasts to that of many young poets in the UK who are experimenting with what I might call ‘anti music’.’— Kathryn Maris in her introduction

‘It is hard not to fall in love with Rachel Piercey’s latest pamphlet, Rivers Wanted, with its quizzical, imaginative world at once familiar and strange; its sensitive, honest and playful language. […] Rivers Wanted shows Piercey’s refreshing originality, particularly her ability to forge a language of her own. A wonderful work of wit, imagination and skill from such a young poet, the pamphlet is a real gem.’ — Jennifer Wong on Sabotage Reviews

‘Through sometimes witty, sometimes serious but always wonderfully concise language, Piercey takes us on a journey through the mundanity, anxiety, discovery and sentimentality that inevitably accompany a life in this world. […] Rivers Wanted is definitely something I will keep with me to re-read. If you’ve ever wondered how the feeling of something being just right can be perfectly described – what to do with a redundant wedding ring, why a candy pink bike is the safest bet, or how accurately reality can be encapsulated in a slice of the surreal – I’d definitely recommend this collection.’ — Rosa Garland for Cuckoo Reviews

Rachel Piercey is a former editor at The Cadaverine magazine and a current editor at the Emma Press. She studied English Literature at St Hugh’s College, Oxford, where she won the Newdigate Prize in 2008. Her poems have appeared in various journals and magazines including Magma, Butcher’s Dog and The Rialto. Rivers Wanted is her second pamphlet; her first, The Flower and the Plough (2013), is also published by the Emma Press.