Poems by Padraig Regan
With an introduction by Andrew McMillan 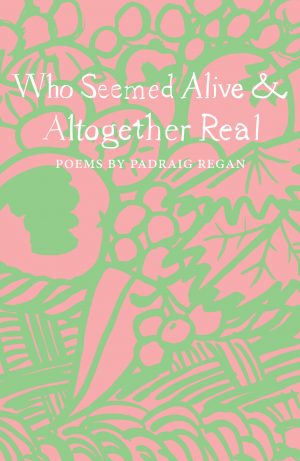 A pair of poems titled ‘Glory’ reads the iconography of Elizabeth I as a kind of drag act for the body politic, and the final sequence is a dazzling, near-Cubist display, shedding light on Caravaggio’s pictures of a young male model from a variety of revealing angles.

From the introduction by Andrew McMillan

‘Aside from the intelligence and joy of these poems, there is a real mastery of image too – the language sometimes recalling Edmund White at his most luxurious, and the opening of poems such as ‘Aubade’ being simply breath-taking. These are poems that look at the extremities of experience and ground them for the reader.’

‘It’s fun when a poet’s having fun. Especially exuberant, controlled fun. And that’s exactly how this pamphlet strikes me. A virtuoso sharing his art, and his enjoyment of it.’ Charlotte Gann, Sphinx

Padraig Regan was born and lives in Belfast. They graduated with an MA from the Seamus Heaney Centre. A debut pamphlet, Delicious, was published in 2016. In 2015, Padraig won an Eric Gregory Award. [Photo © John Meikleham]