The Head That Wears a Crown: Poems about Kings and Queens 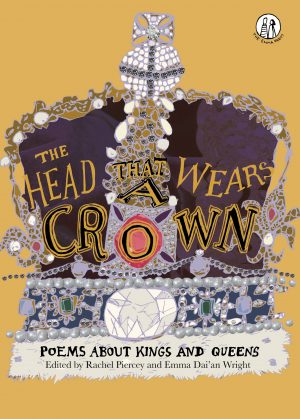 Which King had a mischievous pet monkey? Which ruthless Queen enjoyed toasting people to a crisp? Whose reign lasted only nine days? The Head That Wears A Crown is a captivating collection that features the Kings and Queens of the British Isles as you’ve never seen them before.

Read Queen Victoria’s Twitter posts and young Elizabeth I’s letters to her father’s latest wife. Hear the muddy marching song of King Harold’s soldiers and learn which royal was Danish as a pastry, but nothing like as sweet! Intriguing, comical and accompanied by fascinating historical facts, these vibrant poems are a joy to read, bringing a long line of daring and devious monarchs to life.

‘This anthology picks up on not just the expected, but hones in on the misfits, the misunderstood, the forgotten, the interesting, the known but not as you expected, the almost unknown and the possibly wish you hadn’t known power brokers of British history… Ideal as an impetus for creative writing and literacy teaching, this anthology includes shape poetry, rhyming couplets, conversation poems, blank verse, ballads and narrative verse… There’s also an interview with historian Dr Kate Wiles of History Today – which will appeal to children looking to delve deeper into the characters.’  The School Reading List

Rachel Piercey is a poet and editor for adults and children. She regularly performs her poems and runs writing workshops at schools and festivals across the country. Rachel’s poems have appeared in The Rialto, Magma, Poems in Which, Butcher’s Dog and The Poetry Review, as well as various Emma Press pamphlets and anthologies, and in 2008 she won the Newdigate Prize. She lives in London. rachelpierceypoet.com

Aileen Ballantyne is the former staff medical correspondent for the Guardian and the Sunday Times and her investigative journalism has twice been commended in the British Press Awards. Aileen has a PhD in Creative Writing and Modern Poetry from Edinburgh University, where she now teaches Literature and Contemporary Poetry.

Meghan Ballard was adopted from South Korea, but now lives in the Rocky Mountains of Utah with her husband and two young children. As a child, she was sure she was misplaced royalty, but to her dismay, they have yet to come claim her. This is her first published poem.

Jerrold Bowam is a British/Canadian writer who aspires to find others who are as amused as his muse, have a predilection for repetition and a penchant for recurrence.

Melanie Branton writes and performs both funny and serious poems. She has worked as an English and Drama teacher and as an assistant theatre director, but has, sadly, never been a queen. Her poetry collections for adults are My Cloth-Eared Heart (Oversteps, 2017) and Can You See Where I’m Coming From? (Burning Eye, 2018).

Carole Bromley was shortlisted for the 2014 Manchester Writing for Children Award and her poem ‘Goldilocks’ was performed at the CLiPPA Awards in 2015. She was highly commended in the Caterpillar Competition 2016 and her first collection for children, Blast Off!, was published by Smith Doorstop in 2017.

Jane Burn spent her childhood wrapping bath-towel capes around herself while wearing tin-foil crowns. She thinks kings and queens are fascinating – there are so many of them and most have done some very odd, fascinating, terrible or wonderful stuff. They are well worth learning about.

John Canfield grew up in Cornwall and now tries not to be a grown up in London. He writes poems and sometimes people put them in books and sometimes they don’t. A promising career as a clown was scuppered by his desire to grow a beard.

Rebecca Colby taught English in Taiwan, worked for a Russian comedian and travelled the world as a tour director before writing books and poems for children. Her books include There was a Wee Lassie who Swallowed a Midgie, It’s Raining Bats & Frogs, Motor Goose and Captain Bling’s Christmas Plunder.

Shauna Darling Robertson’s poems for adults and children have been performed by actors, set to music, displayed on buses, made into comic art, hung on a pub wall and published in a bunch of books and magazines. She has two chapbooks, Blueprints for a Minefield (Fair Acre Press, 2016) and Love Bites (Dancing Girl Press, 2018).

Dharmavadana is fascinated by history, and living in London he feels surrounded by it. He has written several historical poems and one story set in the Middle Ages, about a knight, a monk and twin monsters. He has a (non-historical) poem in the Emma Press anthology Watcher of the Skies: Poems about Space and Aliens.

Julie Anna Douglas lives on the West Coast of Scotland. Her poetry has appeared in Spider and Ember magazines in USA and in The Caterpillar in Ireland, and her poem ‘Recipe for Cosmic Cupcakes’ featured in Watcher of the Skies: Poems about Space and Aliens. She is a writer for Amazing Children’s Educational Magazine.

Matthew Haigh lives and works in Cardiff. His poems have appeared in Poetry London, Poetry Wales, Magma and the Guardian. He has also contributed to the Sidekick Books anthology Coin Opera II: Fulminare’s Revenge, a book of poems inspired by computer games.

Jack Houston lives in London with his wife and two young sons. He works in Hackney’s public libraries where he holds free poetry workshops that you (yes, you) are welcome to too. He likes playing the drums for his band, Bugeye, and walking Raffles, his very silly dog.

Kirsten Irving lives in London and is the joint ruler of Sidekick Books. She has minimal conquests to her name, but counts among her titles High Priestess of Crows and Devourer of Books. @KoftheTriffids

Anna Kisby is a poet and mother of three living in Devon. She’s loved history ever since seeing Tudor graffiti in Queen Elizabeth I’s cell in the Tower of London on a school trip. She won the BBC Proms Poetry competition 2016 and has poems in various magazines and anthologies.

David McKelvie lives at the top of a hill in Greenock, Scotland. Each day, he passes Dumbarton Rock, once home to the now forgotten kingdom of Alt Clut. All his poems are written to be heard by children.

Emma Rose Millar writes historical fiction for adults and poetry for children. Her novel Five Guns Blazing was first place category winner in The Chaucer Awards for Historical Fiction. Her novella, The Women Friends: Selina was shortlisted for the Goethe Award in 2016. She has recently published her third novel, Delirium, with Crooked Cat Books.

Fiona Mills wrote lots of poems and stories when she was at school, but stopped when she grew up and became a journalist. Now she has three children of her own, she has starting making things up again. Queen Anne’s Lace is the first of her poems to be published.

Brian Moses has been a professional poet/writer-in-schools/anthologist/percussionist since 1988. He has published over 200 books and his Macmillan poetry books have sold over a million copies. He is featured on the Poetry Archive. His latest book is Lost Magic: The Very Best of Brian Moses (Macmillan).

Laura Mucha studied flying trapeze, philosophy and psychology, and swam in Antarctica before becoming a lawyer. Now she’s a full time poet, author and performer. She won the Caterpillar Poetry Prize, Poetry Ireland featured her as one of eight poets displayed on the Dublin overground, and her debut book is Love Factually (Bloomsbury).

Alan Murphy has written lots of strange poems for children and teenagers, which he usually illustrates with his own colourful collages. His books Prometheus Unplugged and Psychosilly were shortlisted for the Irish CAP awards. His latest collection is All Gums Blazing. He lives in West Waterford and is not mad.

Rachael M Nicholas is a poet from Birmingham. In 2012 she was lucky enough to win the Eric Gregory Award. Her poems in previous Emma Press anthologies have been about space (very big!), the Minotaur (very scary!) and Ariadne (very, very clever!).

Richard O’Brien is a poet, translator and academic based in Birmingham, UK. He has a PhD on Shakespeare and the development of verse drama. Richard’s pamphlets include The Emmores (Emma Press, 2014) and A Bloody Mess (Valley Press, 2015). In 2017, he won an Eric Gregory Award from the Society of Authors for his poetry.

Suzanne Olivante’s grandmother worked in service to Queen Elizabeth the Queen Mother in London and Balmoral Castle, spending hours polishing oodles of copper saucepans. Suzanne’s poems have been published in several anthologies for children, placed in competitions and she was shortlisted for the National Literacy Trust Poetry Prize in 2015.

Catherine Olver is studying for a PhD in children’s literature at the University of Cambridge. Katherine Parr has been her historical heroine since she played Katherine in a Year 5 play. Her drama teacher said he chose her for the part because she sits up straight, like a queen. She hopes her poem in this book will atone for her dreadful acting.

Kate O’Neil lives on the Northern Illawarra coast of NSW, Australia. Her poems for children have been published in magazines and anthologies including The Caterpillar and Let in the Stars. She was shortlisted for the 2014 Manchester Poetry for Children prize and her collection, Cool Poems will be published by Triple D Books in 2018.

John H Rice teaches, assesses and writes all sorts of educational materials. Sometimes he is afflicted by poetry and he has to write the poems down to stop them pinging around his head. He lives very near to where King Sweyn is rumoured to have moored his fleet.

Catherine Rockwood studied early-modern literature and history at St. Andrews, and Yale University. She lives in Massachusetts with her family, and hopes Owen, Iris and Tobias may enjoy this collection of poetry.

Toby Sligo lives with his wife and cat by the sea. When he is not reading or writing, he enjoys long country walks. This is his first published poem.

Jennifer Watson went on a spot of leave from the Cabinet Office, acquired two dogs and forgot to go back. She has been shortlisted for the Bridport Prize, the Wasafiri New Writing Prize and the Manchester Writing For Children Prize. Jennifer lives in a small village in Kent.

Jeremy Wikeley had an illustrated ‘Kings and Queens of England’ Ladybird book when he was a kid, and ended up studying History at university. These two things weren’t unconnected. Jeremy works for the Orwell Foundation.

Kate Wise has been published in various Emma Press anthologies, and journals including the Rialto, Structo, and Poems in Which. Despite owning several of those rulers from museums, she is yet to learn the order of the British Monarchs… She grew up in Cheshire, and tweets at @kwise62

Elli Woollard grew up thinking she was distantly related to royalty, only to discover that her ancestors had told massive fibs about their heritage. Like them, Elli likes telling stories, but she gets them published. The author of several picture books, she lives in London with her husband and four children.

Ros Woolner works as a translator from her home in Wolverhampton, which she shares with her partner, her two children and a black cat called Henry who likes to walk across laptops and sit on paper.