This Is Not Your Final Form: Poems about Birmingham 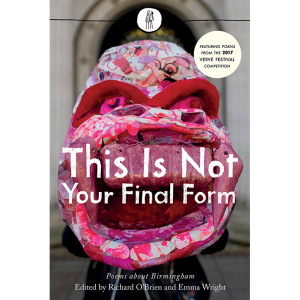 This Is Not Your Final Form is a collection of poems about Birmingham. Bringing together entries from the inaugural VERVE Poetry Festival Competition, this anthology depicts a second city which is no longer content to play second fiddle. Poets from a range of backgrounds – long-term residents and visitors alike – tell personal stories and take on the area’s complex industrial and social history, as well as its unique blend of architectural styles. The result is a tough, unsentimental love letter to the Midlands metropolis, which finds beauty in concrete and unity in contradiction.

Richard O’Brien’s pamphlets include The Emmores (Emma Press, 2014) and A Bloody Mess (Valley Press, 2015). His work has featured in Oxford Poetry, Poetry London, and The Salt Book of Younger Poets. He also writes for children: his first children’s play – an adaptation of The Selfish Giant – was produced at the Arcola Theatre in December 2016. He is working on a Midlands3Cities-funded PhD on Shakespeare and verse drama at the University of Birmingham.

‘This Is Not Your Final Form is a compact, accessible read befitting multiple revisits in order to uncover the poems’ many layers. […] The poets have channelled the city’s depths and looked (for the most part) beyond the obvious clichés. Talented voices of many different backgrounds and poetic styles are featured, reflecting the diversity which to me is one of the city’s greatest strengths. The city’s distinctive self-deprecating humour and outlook fill the pages of this funny, bleak, uplifting, tragic, original, gritty and inspirational love letter to Birmingham.’ – Contemporary Small Press

Margaret Adkins is currently studying for a BA (Hons) in Creative Writing and English Literature at Worcester University. In a previous life she worked as a nurse and midwife in Birmingham. She has had a poem published on Poetica Botanica (Ledbury Poetry Festival, 2016) and a few elsewhere.

Reza Arabpour is a Birmingham-based artist with a Brummie-Persian flavour. He writes and performs modern folk songs under the name ‘Reza Jaan’ at weekends and on Soundcloud. He is an aspiring director, and will soon be releasing a blog called The Collected Works of Rezathustra.

Carole Bromley lives in York and has two books with Smith/Doorstop, the most recent being The Stonegate Devil which won the 2016 York Culture Award. A collection for children, Blast Off!, will be published in June 2017.

Natalie Burdett is from the Black Country. She is studying for a PhD in Creative Writing at Manchester Metropolitan University, researching poetry, place and politics. Her poems have been shortlisted for the London Magazine and Bridport prizes and work has appeared with Ink, Sweat & Tears, Under the Radar and Agenda.

Keith Chandler’s poetry has been published by Carcanet, Redbeck and Peterloo in five collections. His poems have won prizes in many competitions, including a runner-up prize in the 2012 National Poetry Competition. keithchandlerpoet.com

Jenna Clake is studying for a PhD in Creative Writing at the University of Birmingham. She is the editor of The Birmingham Journal of Literature and Language. Her work has appeared in Poems in Which, Queen Mob’s Tea House and more. She is the winner of the 2016 Melita Hume Prize.

David Clarke’s pamphlet, Gaud, won the Michael Marks Award in 2013. His first collection, Arc, was published by Nine Arches Press in 2015 and a new pamphlet, Scare Stories, is due out with V Press in 2017.

Nellie Cole is a student and writer from the Black Country. Her poems have been published online by arts charity Leaveners and featured in an exhibition at Dudley Museum and Art Gallery. She is currently working on a collection about the local murder mystery: Bella and the Wych Elm.

Rishi Dastidar’s poetry has been published by the Financial Times, Tate Modern and the Southbank Centre amongst many others. His debut collection, Ticker-tape, is published by Nine Arches Press. He is a consulting editor at The Rialto magazine, a member of Malika’s Poetry Kitchen, and also serves as chair of Spread The Word.

Bernard Davis has lived in Birmingham for thirty-four years and regularly reads at local poetry events. Five of his poems have been set to music by composer Andrew Downes for the song cycle ‘The Door of Winter’, which will be performed for the first time in 2017.

Susannah Dickey has had work published in Ambit and The London Journal of Fiction and will be featured in The Best New British and Irish Poets 2017 (Eyewear). She is in her final year studying for a BA in English with Creative Writing at Queen’s University Belfast.

Tessa Foley is originally from Flitwick, Bedfordshire. She now lives in Portsmouth, working in the Creative and Cultural Industries Faculty at the University, where she previously gained her Masters in Creative Writing. Recognised in the Bristol Poetry Prize and Poetry Rivals Competition, she also won the Live Canon Competition in 2013. www.tessafoley.com

Heather Freckleton has lived in various locations in the UK and, for a short time, in India. Her poems and short stories have been published in several anthologies and highly commended in the 2009 Cheshire Prize for Literature. In 2015 she won first prize in the Poems Please Me competition.

Victoria Gatehouse lives in West Yorkshire and her poems have appeared in numerous magazines and anthologies. Her competition wins include Ilkley Literature Festival and the Poetry News Members’ Competition and she has been placed in many others. In 2016 Victoria was shortlisted for the Flambard Poetry Prize.

Roz Goddard is a poet, teacher and former poet laureate of Birmingham. She has published four collections of poetry and currently hosts Brum Stanza, the monthly Poetry Society group which meets monthly at Waterstones in Birmingham to write and critique poetry.

Shaun Hand is the guitarist with FABRIK and also writes and performs under the name ‘Broke English’. He wrote and published Pop Art Poems: The Music of The Jam through his own imprint, Sheep Publishing. He is currently working on his first novel and reprinting an out-of-print Victorian novel.

Nick Knibb (a.k.a The Archbishop) can be found in noisy, crowded pubs performing on stage in between punk bands. His poems are often based on music from the 1970s and 80s, and at the Godiva Festival in 2016 he was commissioned to perform a trio of poems called ‘Coventry, The Specials and Me’.

Gregory Leadbetter’s debut full-length poetry collection, The Fetch, was published by Nine Arches Press in October 2016. His book Coleridge and the Daemonic Imagination (Palgrave Macmillan, 2011) won the University English Book Prize in 2012. ‘Beorma’ was commissioned for the inauguration of Sir Lenny Henry as Chancellor of Birmingham City University in November 2016.

Gill Learner left Shirley for London in 1960 and now lives in Reading. She has won several prizes, including the Poetry Society’s Hamish Canham award, and been published in many magazines and anthologies. Her collections, The Agister’s Experiment (2011) and Chill Factor (2016), are from Two Rivers Press. www.poetrypf.co.uk/gilllearnerpage.shtml

Bernadette Lynch lives between Birmingham and the West of Ireland. In 2016, her poem ‘Bringing Home the Cows’ was commended in the Poetry Society’s Stanza Competition. Her work won a Hanna Greally Award at the SiarScéal Festival, County Roscommon, and was published in the Festival Anthology, Centenary in Reflection.

John McGhee lives in London. His work has appeared in Magma, Lighthouse Review and Under the Radar. He is currently completing a PhD on surrealism and futures studies. @johnfutz

Kibriya Mehrban is studying English Literature and Creative Writing at the University of Birmingham. Often claiming she’s writing for her blog or working on a novel, Kibriya actually spends her time reading/writing poetry, attending spoken word events and narrowly avoiding lateness penalties on assignments. This is her first published poem.

Jill Munro has been widely published in anthologies and magazines and long-listed three times for the National Poetry Competition. Her first collection, Man from La Paz, was published in 2015 by Green Bottle Press. She won the Fair Acre Press Pamphlet Competition 2015 with The Quilted Multiverse, published 2016.

Nusayba Nabeel is a ten-year-old girl born and raised in Birmingham. She has two younger sisters with whom she loves to explore her city. She particularly enjoys reading and baking. She aspires to become a writer, beautifying life for herself and others with poetry.

Rachael Nicholas is a poet from Birmingham. She was a 2012 Eric Gregory Award winner. Her work has appeared in Magma and Banshee magazine, as well as anthologies by the Emma Press. Her pamphlet, Somewhere Near in the Dark, was published by Eyewear Publishing.

Cheryl Pearson lives and writes in Manchester. Her poems have been included in publications such as the Guardian, Prole, Envoi, and Southword. She won the Cheshire Prize for Literature 2016 and has been nominated for a Pushcart Prize. Her debut collection, Oysterlight, is forthcoming with Pindrop Press in Spring 2017.

Helen Rehman lives in Birmingham and is interested in folklore, horror and theatre. She works part-time as a neighbourhood innovator for Moseley and Kings Heath (the rest of her time is spent being a mother to Alfie and Izzy and a wife to Mo). This is Helen’s first published poem.

Ali-Noor Salam is a Year 4 student at Barford Primary School. He likes to write poems in his spare time and is an avid Manchester United Fan.

Maya Stokes is an aspiring poet and short story writer. She lives in the Midlands. This is her second published poem.

Louise Vale is a screenwriter, poet and translator. Her poems have been published in magazines, online, and broadcast on US Public Radio. Some are monologues, dialogues or mini-dramas. She was shortlisted for the Magma Poetry Editors’ Prize in 2015 and 2016.

Rob Walton is from Scunthorpe and lives on Tyneside. He writes and performs poetry and fiction for adults and children. His work has been published by the Emma Press, Butcher’s Dog, IRON Press, Red Squirrel, Arachne and others. He collaborated with sculptor Russ Coleman on the New Hartley Memorial Pathway and one of the exhibits for the forthcoming Fountain 17.

Charlotte Wetton was born in Birmingham and has lived most of her life in Yorkshire. Her spoken word album, Body Politic, was released in 2012 and her new pamphlet, I Refuse to Turn into a Hat-stand, is out with Calder Valley Poetry in March 2017. Her favourite place in Birmingham is the Gas Street Basin.