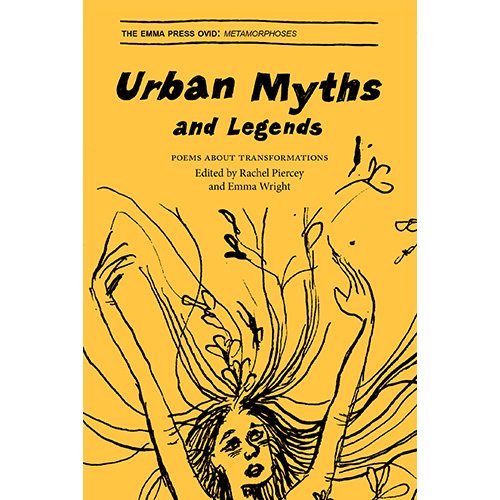 Urban Myths and Legends is a lively collection of poems by modern poets who have taken inspiration from the Roman poet Ovid’s Metamorphoses. The poems all tell stories which include a transformation – some inspired directly by the Metamorphoses and some completely new and of our time. Wings sprout, leaves fall and no state is certain, as the poets channel Ovid’s mischief and whisper tales of just and unjust deserts.

‘Inspired by Ovid’s Metamorphoses, each poem in this small wonder of a book considers transformations in their many forms. Whether we’re witnessing a reversal, acceleration or an entirely new metamorphosis, each poem in this eye-opening, thought provoking collection does just that – provokes thought. […] Accompanied by well thought images some of which make use of the recurring motif of trees – a symbol of transformation – and featuring poems which play with structural and topical constructs, this is certainly a collection to spend time with and one which will stay with you for a long time.’ – LiteratureWorks

‘This breath-taking book offers every lover of poetry – and those who do not know much about the lure of the poem – a surreptitious look into the world of myths and legends. Every poem has something to offer even the most cynical of readers. […] In this anthology every poem earns its place. Each one is strong in terms of content, style and technique to pull off those surprises. It’s unusual in an anthology not to find one slightly weaker poem than the rest but that doesn’t happen here. The editors have worked hard to keep the pace and structure of the book highly suggestive and intriguing.’ – Wendy French, London Grip

‘Urban Myths and Legends feels like a city walk along a street with varied architecture, some buildings ornately constructed, some classical and modern with clean lines, each a marriage of form and function; each worth stopping to study while a gentle wind whispers of history, suggestive fantasy and magic realism along a street worth return visits.’ – Emma Lee’s Blog

Emma Wright studied Classics at Brasenose College, Oxford. She worked in ebook production at Orion Publishing Group before leaving to set up the Emma Press in 2012. In 2015 she toured the UK with the Myths and Monsters poetry tour for children, supported with funding from Arts Council England as part of the Lottery-funded Grants for the Arts programme. She lives in Birmingham.

Deborah Alma has an MA in Creative Writing, teaches at Worcester University and works with people with dementia and at the end of their lives using poetry. She is Emergency Poet in her 1970s ambulance and edited Emergency Poet: An Anti-Stress Anthology. Her debut pamphlet is True Tales of the Countryside (Emma Press, 2015).

Sophie F Baker has had work published in magazines including Smiths Knoll, The Rialto, Poetry London and Magma. She has an Andrew Waterhouse Award from New Writing North, and an Eric Gregory Award. She works at The Poetry Society and is a founding editor of poetry magazine Butcher’s Dog. www.sophiefbaker.co.uk

Sohini Basak lives and works in Delhi. She was one of the recipients of the inaugural RædLeaf India Poetry Prize and was shortlisted for the 2014 Melita Hume Poetry Prize. She is a recent graduate of the University of East Anglia, where she was awarded the Malcolm Bradbury Continuation Grant for Poetry.

Dzifa Benson was born in London to Ghanaian parents and grew up in West Africa. She writes, performs, curates and teaches, and has performed her work at venues including Tate Britain, the Institute of Contemporary Arts and Southbank Centre. She was a writer-in-residence at the Courtauld Institute of Art in 2007-8.

Nisha Bhakoo is a writer based in Berlin. Her poetry has appeared in 3:AM Magazine, Haverthorn, Mud Press’s Christmas Zine, Poems In Which and Ink Sweat and Tears. In 2015, she was shortlisted for the Jane Martin Poetry Prize, won third prize in the Ledbury Festival competition and was selected for the GlogauAIR artist residency scheme.

Rohan Chhetri is a Nepali-Indian poet. His poems have been published in Eclectica, Rattle, EVENT and The Antigonish Review, among others, and is forthcoming in Prelude and Fulcrum. He has won The (Great) Indian Poetry Collective’s ‘Emerging Poets Prize 2015’, and his first book of poems, Slow Startle, will be published in July 2016.

Ellie Danak is an Edinburgh-based poet with a background in researching Swedish crime novels. Her poems have been published in a number of anthologies and magazines, including the Emma Press, Magma, Antiphon and others. She is on the Scottish Book Trust’s New Writers Awards 2016 shortlist.

Francine Elena was born in Canterbury and grew up in London, Portugal and Scotland. Her poems were shortlisted for the 2014 PigHog Prize and have appeared in various publications including The Best British Poetry 2013 and 2015 anthologies, the Sunday Times, Poetry London, Poetry Wales, The Quietus, Ambit, 3:AM Magazine and Wasafiri.

Ella Frears has had poetry published in Lighthouse, Poems In Which, The Stockholm Review of Literature and The Moth, among others. She is a trustee of Magma and is co-editing issue 66. She was shortlisted for Young Poet Laureate for London (2014) and was Poet in Residence at Knole House (2015). Ella is currently a Jerwood/Arvon Mentee (2016/17).

Linda Goulden alternates between urban and rural settings and her poems between magazine (incl. Magma), anthology (incl. Beautiful Dragons), digital (incl. Fair Acre) and readings (incl. Sheffield Poem-a-thon). Her poem in this book was first published by Manchester Cathedral, where you will find a wood carving of the Eagle and Child.

John Greening is a winner of the Bridport and TLS Prizes and a Cholmondeley Award and an RLF Writing Fellow at Newnham College, Cambridge. His recent books include To the War Poets (Carcanet), the music anthology Accompanied Voices, and Heath (with Penelope Shuttle) from Nine Arches Press. See www.johngreening.co.uk

Although they recently had to neuter Ralph, their dog, after he got into one too many fights, Jack Houston and his partner have had a baby so don’t feel so bad about it. His recent work can be found online at London Grip, The London Journal of Fiction and New Boots & Pantisocracies.

Annie Katchinska was born in Moscow in 1990 and grew up in London. Her Faber New Poets pamphlet was published in 2010, and her poems have been published in various journals and anthologies. After graduating from Cambridge University she spent two years living in Sapporo, Japan, before returning to London in 2013.

Joe Lines studied English at the University of Sussex and Queen’s University Belfast. His poems have appeared in Causeway/Cabhsair, The Cadaverine magazine and The Lifeboat.

Emma McKervey studied at Dartington College of Arts and lives in Northern Ireland. She has worked in community arts and education over the years and has had numerous poems published in journals and anthologies.

Margot Myers lives in Oxford. She loves using myth and fairytale in her poetry. She has been placed or commended in The Havant Poetry Competition 2013, 2014 and 2015, the Cinnamon Press mini-competition Feb 2016, and shortlisted for The Bridport Flashfiction Prize 2015. She has a poem in The Emma Press Anthology of Dance (2015).

Richard O’Brien’s pamphlets include The Emmores (Emma Press, 2014) and A Bloody Mess (Valley Press, 2015). His work has featured in Oxford Poetry, Poetry London, and The Salt Book of Younger Poets. He is working on a Midlands3Cities-funded PhD on Shakespeare and verse drama at the University of Birmingham.

Kathy Pimlott’s poems have been published in magazines including Magma, Brittle Star and The North, online and in anthologies, most recently the Emma Press’s Best Friends Forever. In 2015, she was one of the Poetry Trust’s Aldeburgh Eight. Her pamphlet Goose Fair Night was published in March 2016 by the Emma Press.

Susan Richardson is a Welsh poet, performer and educator. Her third poetry collection, skindancing (Cinnamon Press, 2015), is themed around human-animal metamorphosis and our intimacy with, and alienation from, the wild and our animal selves. She is currently poet-in-residence with both the Marine Conservation Society and World Animal Day.

Jennifer Robertson is a poet and critic living in Bombay. Her book reviews and essays have appeared in Scroll, American Book Review and the Telegraph. She co-curates the ‘Literary Encounters’ session for The PEN-All India Centre. Her first poetry manuscript was chosen for the Editor’s choice award by The (Great) Indian Poetry Collective.

Jacqueline Saphra’s The Kitchen of Lovely Contraptions (flipped eye) was nominated for the Aldeburgh First Collection Prize. If I Lay on my Back I Saw Nothing but Naked Women (Emma Press) won Best Collaborative Work at the Saboteur Awards 2015. Her second collection, All My Mad Mothers, is due from Nine Arches Press in Spring 2017.

Paul Stephenson was a winner in the Poetry Business Book & Pamphlet Competition, judged by Billy Collins. His pamphlet Those People (Smith/Doorstop) was published in 2015. He has been published in magazines including The Rialto, The North and Magma. He took part in the Jerwood/Arvon mentoring scheme. He currently lives in Paris.

Degna Stone is a poet and producer based in Tyne and Wear. She is co-founder of Butcher’s Dog poetry magazine and in 2015 she received a Northern Writers Award. She was recently selected for The Complete Works III, a national development programme for advanced Black and Asian poets.

Jon Stone is a commissioning editor at Sidekick Books and a PhD researcher in poetry-game hybrids. His collection School of Forgery (Salt, 2012) was a PBS Recommendation and he won the Poetry London competition in 2014. His latest pamphlet is Tomboys (Tungsten Press, 2016), a set of calligrams based on inspiring girl characters from anime.

Pam Thompson is a poet and university lecturer based in Leicester. She is one of the organisers of Word!, a spoken-word night at The Y Theatre and her publications include The Japan Quiz (Redbeck Press, 2009) and Show Date and Time (Smith/Doorstop, 2006). She won First Prize (Judges’ Prize) in the Magma Poetry Competition in 2015.

Ruth Wiggins lives in London. Her work has appeared in magazines and anthologies, and her first pamphlet Myrtle was published by the Emma Press in 2014. She blogs about poetry, travel and mud at mudpath.wordpress.com

Lana Faith Young lives in Australia. In 2012 Lana was shortlisted for the Western Australian Premiere’s Book Awards in the digital narrative category. Lana has recently completed a Bachelor of Communications degree through Griffiths University. Lana is currently writing her second novel for children.