Watcher of the Skies: Poems about Space and Aliens 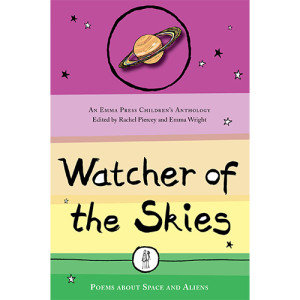 How big is the universe? Are there dogs in space? What if your friend – or your granddad – was an alien? Join the poets in wondering in Watcher of the Skies, a sparkling collection of poems about the outermost possibilities of space, life and our imaginations.

Fully illustrated by Emma Wright and accompanied with helpful facts from space scientist Rachel Cochrane (Institute for Astronomy, University of Edinburgh) and ideas for writing poems from Rachel Piercey, this is the perfect companion for any budding stargazer or astronaut.

‘This is a book which truly has something for everyone. From poems considering BIG topics, perfect for quiet contemplation such as ‘But How Big is the Universe?’ to those which are designed to be read and shared aloud: ‘Comet’ (which simply must be heard – how will you respond to the challenge it sets?), there are hours of sharing, reading and discovering to be done through an exploration of the space themed poetic treasures contained in this collection. […] This is a collection that well deserves a place on the shelves of any young science enthusiasts and which we’re sure will also bring adult readers plenty to discover and marvel at. A thoroughly recommended collection.’ – One Giant Read

‘A delightful book of poetry inspired by space, planets, astronauts, and aliens, with contributions from nearly 30 British poets. There are long poems, short poems, metered and not, with tone ranging from awestruck to silly, dreamy to defiant. Scribbly illustrations reminiscent of Quentin Blake accompany the poems. […] At the end of the book is a list of prompts for kids to write space-inspired poetry, and short biographies of all of the poets. Give this book to your kids’ English teachers!’ – Emily Lakdawalla, The Planetary Society

‘This book has one main theme: space and aliens, and at first I thought I wasn’t going to enjoy it at all (the theme didn’t really appeal to me) but by the end I realised I really, really enjoyed this book. The poems were quick, short and fun, as well as being packed full of interesting imagery. The book also had facts and space-inspired imaged sprinkled throughout, which made it a much more enjoyable read.’ – Jacob, age thirteen, Scoop Magazine

Rachel Piercey (pictured, left) is a poet and editor for adults and children. She regularly performs her poems and runs writing workshops at schools and festivals across the country. Rachel co-edits the Emma Press books alongside Emma, who is one of her best friends from secondary school. Rachel’s poems have appeared in The Rialto, Magma, Poems in Which, Butcher’s Dog and The Poetry Review, as well as various Emma Press pamphlets and anthologies, and in 2008 she won the Newdigate Prize. She lives in London. 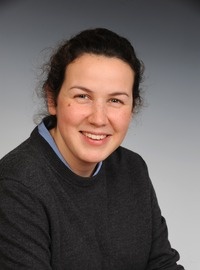 Emma Wright (pictured above, right) runs the Emma Press. After studying Classics at Brasenose College, Oxford, she did various odd jobs and ended up working in ebook production at Orion Publishing Group. She left in 2012 to follow her dreams and start a small publishing house. She lives in Birmingham.

Rachel Cochrane (pictured, right) grew up in London but has now crossed the border to study for a PhD in Astrophysics in Edinburgh. She studies the properties of galaxies and how they evolve over time.

Sohini Basak will never forget the time her brother woke her up at dawn to show the International Space Station orbiting over their hometown. She studied literature and creative writing at the universities of Delhi, Warwick and East Anglia, where she was awarded the Malcolm Bradbury continuation grant for poetry.

John Canfield grew up in Cornwall and now tries not to be a grown up in London. He writes poems and sometimes people put them in books and sometimes they don’t. A promising career as a clown was scuppered by his desire to grow a beard.

Mary Anne Clark is reading English at Merton College, Oxford, and won the Newdigate Prize in 2016. Her poems have appeared in The Mays, Oxford Poetry, Ash and Flight, an anthology responding to the refugee crisis. She also has a poem in the Emma Press’s Falling Out of the Sky.

Mandy Coe is the author of eight books and works regularly with schools and universities through author’s visits. Her poetry has been published on the Poetry Archive, the Guardian, Radio Times and BBC television and radio. Her most recent collections are There Will be Cherries (Shoestring Press, 2016) and If You Could See Laughter (Salt, 2010).

Rebecca Colby taught English in Taiwan, worked for a Russian comedian and travelled the world as a tour director before she started writing books and poems for children. Her books include There was a Wee Lassie who Swallowed a Midgie (2014), It’s Raining Bats & Frogs (2015) and Motor Goose, coming out in 2017.

Dom Conlon is a children’s writer, poet and space biscuit. His work regularly appears in Stew Magazine and alongside The Funeverse poets.

Dharmavadana’s poems and short stories have appeared in many magazines. He has been a member of the Triratna Buddhist Order since 2005 and is poetry editor of the Buddhist arts magazine, Urthona. He has been working on a novel about Mars for three years and hopes to finish it eventually.

Julie Anna Douglas lives on the west coast of Scotland with her husband, son and daughter. Her poetry has appeared in Spider and Ember magazines in the USA, The Caterpillar in Ireland and various anthologies. She was shortlisted in 2015 for the National Literacy Trust/Bloomsbury Children’s Books Poetry Prize and is a writer for Amazing! Children’s Educational Magazine.

Sarah Doyle is the Pre-Raphaelite Society’s poet-in-residence. She has been published in numerous journals and anthologies, placed in many competitions, and is co-author of Dreaming Spheres: Poems of the Solar System (PS Publishing, 2014). Sarah is studying for a Creative Writing MA at Royal Holloway College.

Inua Ellams was born in Nigeria and is an award-winning poet, playwright and founder of the Midnight Run. Identity, displacement and destiny are reoccurring themes in his work, in which he tries mixing the old with the new, the traditional with the contemporary. His books are published by Flipped Eye, Akashic and Oberon.

David Harmer has written many collections of poems of children’s poems as well as having other poems and stories published all over the place. He was a headteacher but he’s lots better now and has spent many years working in schools getting everybody to write poems and laugh.

Philip Monks has published the pamphlets Wake Up!, Nursery Verse and Wrap Yourself Up and co-edited the poetry anthology Iris Of A Peeping Eye. He performs regularly and has run many poetry projects. He is a Visiting Lecturer in Creative Writing at Newman University and the University of Birmingham.

Cheryl Moskowitz is poet-in-residence at Highfield, a large multicultural north London primary school with over 48 languages spoken. Publications and broadcasts include Poetry Pie (CBeebies), Can It Be About Me? (Frances Lincoln), A Life in the Year of… Poetry at Highfield and The Girl is Smiling (Circle Time Press).

Dale Neal lives in the village of Barrowford in Lancashire. When not cutting hair he can be found writing about monkeys, monsters and bouncy castles. His first book, Hippo in a Half Pipe, is due for release in early 2017.

Rachael M Nicholas was born in Birmingham in 1987. Her work has appeared in Magma, Gigantic Sequins, The Cadaverine magazine and Banshee. In 2012 she won an Eric Gregory Award. Her first pamphlet, Somewhere Near in the Dark, was published by Eyewear Publishing in 2014.

Richard O’Brien’s poems for children were published in Falling Out of the Sky by the Emma Press in 2015. He has since seen them reimagined in drawings and performed back to him as choreographed dance routines. In 2015, he took part in the Myths and Monsters poetry tour, and now does author visits for the charity Pop Up Projects. Richard has never been to space, but he did once nearly fall asleep in the San Francisco Planetarium.

Suzanne Olivante lives in Sussex and writes poetry and jokes for children. Her work has been placed in competitions and published in anthologies. She was placed second in the Plough Prize Poem for Children in 2010 and was a finalist for the National Literacy Trust Poetry Prize in 2015.

Abigail Parry spent seven years as a toymaker, before completing her PhD in play and games in contemporary poetry. She can most commonly be found writing about beguiling animals, unhappy monsters, magic and mischief. She received an Eric Gregory Award in 2010.

Gita Ralleigh has completed her MA in Creative Writing at Birkbeck College, University of London and published stories in Wasafiri and the Bellevue Literary Review. She is working on a novel for children, a steampunk fantasy set in India in which mechanical elephants feature.

Lawrence Schimel was born in New York and has lived in Madrid, Spain, for over 17 years. He won the Rhysling Award from the Science Fiction Poetry Association in 2002. His poems are anthologized in The Random House Treasury of Light Verse, Neil Gaiman’s The Sandman: The Book of Dreams, and Slow Things (Emma Press, 2015).

Jon Stone is one half of Sidekick Books, who publish collaborative anthologies of poetry on the subject of computer games, animals, dinosaurs and more. He is a survivor of the Lego Ice Planet Wars and an infamously terrible A-wing pilot.

Kate Wakeling lives in Oxford. When not writing poems, she works as an ethnomusicologist at Trinity Laban Conservatoire of Music & Dance and writer-in-residence with Aurora Orchestra. A pamphlet of her poetry (The Rainbow Faults) is published by The Rialto and a collection of poetry for children aged 8+ (Moon Juice) has just been published by the Emma Press.

Rob Walton is a writer and performer of poetry for children and adults, as well as short stories, scripts and flash fiction. He won the 2015 NFFD micro-fiction award and his poems have been published by the Emma Press (Slow Things), Butcher’s Dog and others. His
children’s poems were published in Let’s Play! (Frances Lincoln).

Kate Wise fits poetry around two under-fives and a career in law. She has been published in various magazines in print and online, most recently in Structo and Poems in Which. Her work appeared in two Emma Press anthologies in 2015.