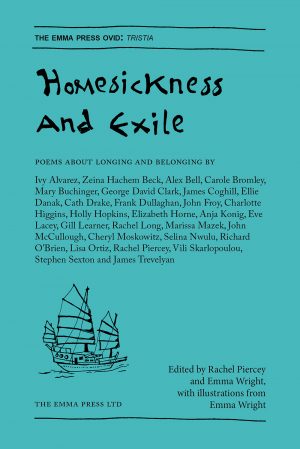 How does it feel to be a foreigner? Can you choose where you call home? What if you reject your home or your home rejects you? Poets from across the world offer moving insights into the emotional pull of places in this fascinating collection about the fundamental human need to belong.

This little blue book is the perfect gift for anyone who is missing home or about to leave home or go travelling. I decided to make the book because I’d been thinking a lot about where I could or should call ‘home’, and I wanted to explore all the different meanings and occasional disconnect between where you’re ‘from’ and where you live.

I was also inspired by the Roman poet Ovid: in AD 8, the Roman poet Ovid was banished from Rome by the Emperor Augustus and sent to Tomis, a remote town on the Black Sea. Cold and wretched in his new environment, he wrote five books of sad poems – the Tristia – in which he begged to be allowed to return. So, in Homesickness and Exile, twenty-eight modern poets expand on Ovid’s themes and explore spiritual as well as physical exile in the modern world.

The book is beautifully produced, with turquoise blue paper for the cover and smooth cream paper inside, and 10 drawings illustrating Ovid’s exile.