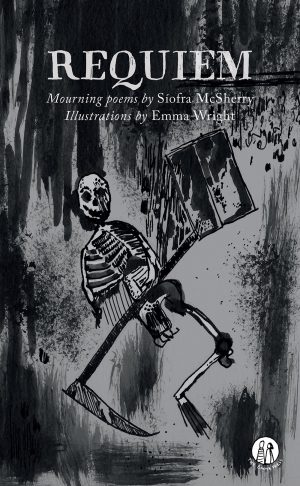 Requiem is a short pamphlet of mourning poems by Síofra McSherry. With illustrations by Emma Wright.

Written in memory of her mother, who died of motor neurone disease in 2012, the twelve poems of Requiem roughly cover the timespan of an illness, death, and burial. The formal structure is based on the Catholic Requiem Mass as it has been set as a choral piece by Giuseppe Verdi, Gabriel Fauré, Maurice Duruflé, and many others. The poems quote from other classical and folk works about the underworld and the passage into death, juxtaposing the engagement with the old text with modern references.

With black-and-white illustrations by Emma Wright.