The Emma Press has launched a call for poems about insects, for a children’s anthology to be edited by Fran Long and Dr Isabel Galleymore. The call opens on the 14th August 2018 and ends on 5th October 2018.

The anthology will be part of the publisher’s continuing series of themed anthologies of poetry for children, following anthologies about myths and legends, space and aliens and British and Irish kings and queens (due out later in 2018) as well as dinosaurs (publishing in 2019). 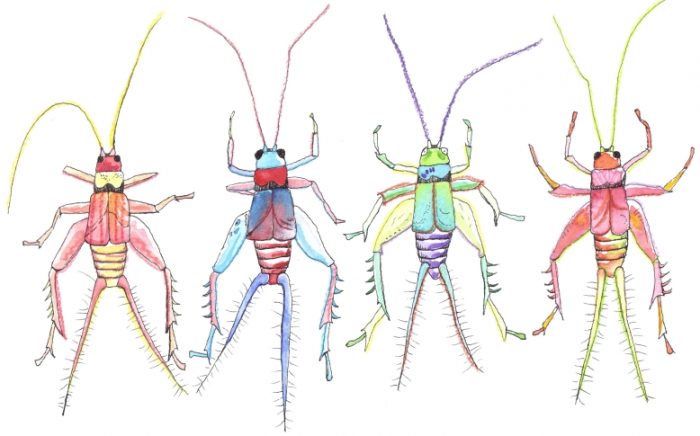 Fran Long is a primary science specialist teacher and fellow of the Primary Science Teaching Trust.  She is passionate about fostering curiosity amongst children and is always looking for innovative ways to educate future generations and promote a love of science and the natural world. Her recent role as Project Insect Education Officer on the Oxford University Museum of Natural History’s Heritage Lottery funded HOPE for the Future project, linked to the British Insect Collection, was the inspiration behind this book.

Dr Isabel Galleymore is an award-winning writer and lecturer at the University of Birmingham. Her poems, which explore ecology and our human place within it, have been published in a number of magazines in the UK and US, whilst her first collection, Significant Other, is forthcoming from Carcanet in 2019. In 2016, Isabel’s curiosity for animals took her to the Amazon Rainforest where she spent a month as a poet-in-residence and encountered howler monkeys, caiman, pink-toed tarantulas and lots and lots of mosquitos.

Long says: ‘With literacy a high priority on the primary curriculum, it is vital to ensure that there are quality resources to support creative cross curriculum delivery. Poems that are factually and scientifically correct are essential, and a fantastic way to embed key scientific vocabulary. All mention of bugs is banned! Enjoy delving deeper into the fascinating world of insects: habitats, characteristics, anatomy (exoskeletons, invertebrates), names (check out famous scientist Carl Linnaeus), classifying, food sources (food chains), how living things depend upon each other, superpowers, life cycles, dangers they are facing, extinction, similarities and differences, how they have changed over time (peppered moth). Be insect champions!’

Galleymore says: ‘While big animals like pandas and dolphins get a lot of attention, the smaller creatures of this world often get overlooked despite the fact that they play a crucial role in the ecosystem. How can we begin to write poems about a few of the 950,000 species of insect currently said to live on Earth? What similarities and differences can we find between these weird and wonderful beings and ourselves? To engage with these  inhabitants, we need to explore scientific fact about insect bodies and behaviour, but we also need to engage our empathy and our imagination.’

Poets are invited to send in up to 3 poems, which should be suitable for readers aged 8+. The submissions guidelines are available on the publisher’s website: https://theemmapress.com/about/submissions/