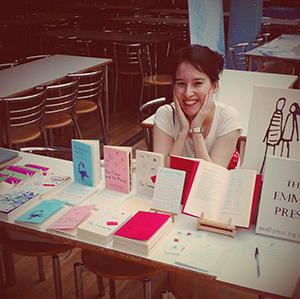 The Emma Press published its first pamphlet, The Flower and the Plough, in January 2013 and will have published ten more by the end of 2014. They recently launched a pair of pamphlets, Oils by Belfast poet Stephen Sexton and Rivers Wanted by Rachel Piercey, with events in London, Oxford and Belfast.

The judges of the 2014 Awards were Tanya Kirk, Lead Curator of Printed Literary Sources at the British Library, Zaffar Kunial, current Poet-in-Residence at the Wordsworth Trust, and Andrew McCulloch, a poetry reviewer for the TLS.

The judges said: ‘A newcomer to the pamphlet world, the Emma Press was founded in 2012, with an aim to create poetry books that are visually stimulating with illustration and bespoke design. […] The judges were impressed by the confidence of this newly established press.’

Emma Wright said: ‘Rachel and I are beyond excited about being shortlisted for the Michael Marks Awards. Poetry pamphlets are quite an overlooked artform, by most literary awards as well as booksellers, but we believe that they are the key to finding new audiences for poetry. We are passionate about our books, and we are thrilled that the judges picked us to be on the shortlist.’

The results will be announced at a special dinner for the shortlisted poets and publishers on 25th November at the British Library.