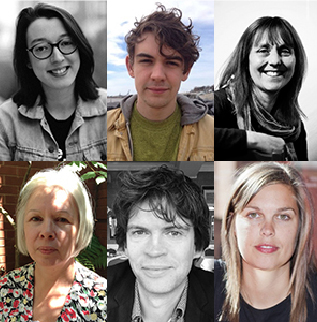 The Emma Press is delighted to announce the six poets whose pamphlets have been chosen for publication in 2015/16: Deborah Alma, Kathy Pimlott, Camille Ralphs, Ben Rogers, James Trevelyan and Alison Winch.

The six poets’ pamphlet proposals were selected by Rachel Piercey and Emma Wright from over 130 submissions sent in during the publisher’s open call last summer. Four of the pamphlets are standard-length pamphlets and two – by Camille Ralphs and James Trevelyan – will join the Emma Press Picks, a series of themed, illustrated pamphlets.

Series editor Rachel Piercey says: ‘Each of these pamphlets is absorbing and electrifying in equal measure. Individually and taken together, they blaze with the excitement of language: these are poems which sweep you up and stride through space, time and the exquisite complexities of human experience.’

The Emma Press published 10 poetry pamphlets in 2014 and was shortlisted for the publisher’s award in the 2014 Michael Marks Awards for Poetry Pamphlets, run by the Wordsworth Trust and the British Library in association with the Times Literary Supplement. Their pamphlet Oils, by Belfast poet Stephen Sexton, was selected by judges Luke Kennard and Denise Saul as the PBS 2014 Winter Pamphlet Choice.

Publisher Emma Wright says: ‘We’re very pleased with the wide range of voices and styles in the pamphlets we’ve chosen. Judging by all the submissions, the Emma Press is developing a reputation as a publisher which is willing to take risks, and I hope our six new pamphlet poets will strengthen this.’

The new pamphlets will be published from October 2015 to June 2016. The Emma Press will launch a new open call for pamphlet submissions in the summer.

More information about the poets

Deborah Alma was born in North London and lives in Powys. She works with people with dementia and at the end of their lives using poetry, teaches creative writing and is the Emergency Poet in her 1970s ambulance.

Kathy Pimlott was born and raised in Nottingham but has lived in Covent Garden for nearly forty years, where she works on community-led public realm projects. Her poems have been published widely, including in Magma, The North, South Bank Poetry and Mslexia.

Camille Ralphs started in Stoke, and has studied in Lancaster, Cambridge and soon Oxford. She is a senior poetry editor at The Missing Slate and was 2014’s Cambridge editor-in-chief of The Mays Anthology.

Ben Rogers lives and works in London. His poetry has been published in magazines including Magma, Long Poem Magazine and Popshot, and he has also written a script for a puppet show and a radio sketch show that was broadcast on BBC London.

James Trevelyan grew up in the Midlands and now lives in London. His poems have been published in print and online magazines, and anthologised by the Emma Press. He is Poetry Reviews Editor for the Cadaverine and works as an Arts Administrator.

Alison Winch was born in Leeds and lives in London. Her book Girlfriends and Postfeminist Sisterhood (Palgrave 2014) looks at female friendship in the media, and she also writes on feminism and Buddhism. She is poetry editor for Soundings Journal.