The Emma Press has launched Queen of Seagulls, a picture book for children by award-winning Latvian writer-illustrator Rūta Briede. To support the publication, Rūta will be visiting in the UK to take part in a number of events for young readers. Please see below for full details.

Queen of Seagulls, written and illustrated by Rūta Briede, is a modern picture book which is aimed at children aged 4+ and suitable for children aged 6+ to read on their own. The original Latvian edition won the 2017 International Baltic Sea Region Jānis Baltvilks Prize in Childrens’ Literature and Book Art for the best debut. 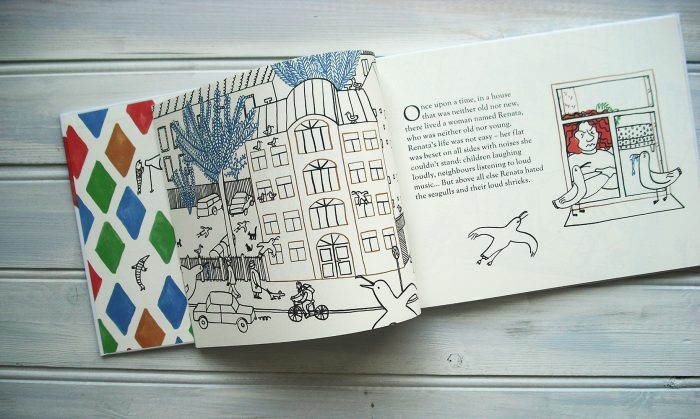 Queen of Seagulls is a quirky picture book with crossover appeal. This is a book about the difficulties and joys of living with other people – but most of all, this is a story about seagulls, magic and true love!

Rūta Briede is a lecturer in illustration at the Art Academy of Latvia. As well as being an illustrator, writer and lecturer, she is art director of the Bikibuks book series. These are pocket-sized editions of illustrated classic Latvian poems, aimed at a young readership. The final installment, the 101st book in the series, was published in 2017 and illustrated by Rūta herself.

The book was originally published in Latvian as Kaiju karalienes noslēpums (Liels un mazs, 2017) and has been translated into English by Elīna Brasliņa. The translation and publication of the book was supported by the Latvian Writers’ Union and Ministry of Culture of the Republic of Latvia.

A reviewer for literary organisation Literature Works says, “The first thing that strikes you upon reading is the alluring and enchanting illustrations. Their charming presentation lead the reader into a mysterious, complex and illuminating story.”

In an interview for the Latvian blog FOLD.lv, Rūta Briede says that the idea for Queen of Seagulls came to her around three years ago now, and that she was inspired to create the book by the lives and stories of her neighbours. “Although the story is drawn from my fantasy, it features many realistic details that allow the main character to be so archetypal and recognisable,” she says.